Captaincy comes with countless new responsibilities but NRL Maori All Stars co-captain Dallin Watene-Zelezniak may be the only leader in world sport who could include making his brother’s bed on game day among his duties.

In what is shaping as another enormously proud day for the Watene-Zelezniak family, youngest sibling Dallin will join veteran Adam Blair in leading the Maori team in Saturday’s clash with the NRL Indigenous All Stars on the Gold Coast.

Following in the footsteps of his great grandfather Tipene Watene, who captained the Maoris and the New Zealand Test team in the 1930s, Watene-Zelezniak’s elevation to Maori captain has become such a monumental family achievement that his grandmother heads a long list of relatives planning to converge on the Gold Coast from New Zealand or Sydney.

With older brother Malakai also a member of the team, the day will prove to be a proud moment for a family steeped in rugby league history.

Maori support no anthem at All Stars

“Not many people get a chance to play with their brother and to do it with the Maoris, a team where our great grandfather set some standards for us in our family so to be here and alongside each other is pretty special,” Dallin said.

“He captained the side, he sort of created pathways for Maori people, and I guess we’ve got some big shoes to fill.

“I’m just happy to put his name back where it once was.

“It’s special (to be co-captain), it’s something that I think is bigger for my family especially my aunties and uncles.

“To do something like that is pretty priceless and you don’t get many opportunities like this and I can’t take it for granted.”

All Stars: Where it all began

Leading by example is what older brother Malakai has always seen in Dallin.

Perhaps not so much in the early days when the four brothers shared the one bedroom growing up, and these two brothers used to “top and tail” in the one bed, but certainly the Canterbury fullback has become the more mature of the duo.

“It’s a huge (honour for him) but I’m still the boss,” Malakai said.

“He still has to make my bed in the morning, make sure my toothbrush is ready to go. He might be captain on the field but I’m captain off it.

“He is meant to learn off me but I get more leadership qualities out of Dal.

“He is pretty mature for his age, pretty controlled and calm off the field. He sets standards. He has been brought up being Christian and Mormon, Dal still holds those standards. I’m a bit rocky so he keeps me level headed and on the straight and narrow.

“I think he is definitely a late bloomer because as a kid he was a bit of a ratbag and he probably wasn’t a leader back then but he has calmed down a bit and matured now.”

Mitchell: The only message I want, is just embrace us

Watene-Zelezniak meanwhile said he agreed with the decision not to play the New Zealand national anthem ahead of Saturday’s game in a display of unity with Australia’s Indigenous players who didn’t want Advance Australia Fair to be sung before the game.

“I think there is a reason for everything we do. The reasoning behind it is to support our Indigenous brothers and sisters over here in Australia so I’m behind it,” Watene-Zelezniak said.

The absence of the anthems has now placed greater significance on the pre-game war cry and Kidwell said the Maoris were working on a special haka for Saturday’s game.

“The focus is all on our war cry, we have a new haka in liaison with our cultural adviser,” he said.

We are both respectful of each other’s culture but when that whistle blows it’s all bets off.” 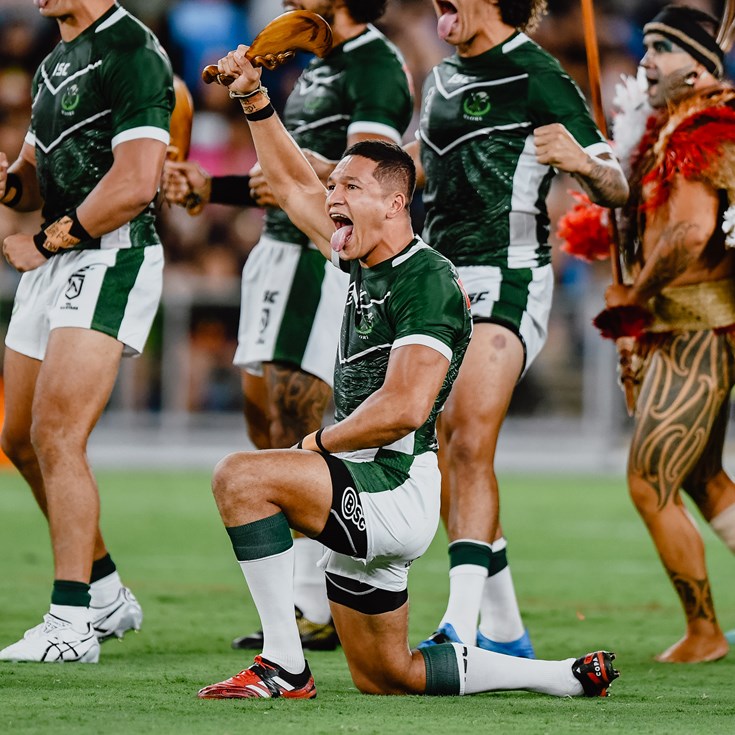 The phone call Dallin made to his brother Malakai

How Maori clash can inspire Indigenous stars to influence change