A 28-point surge in the opening 30 minutes has propelled Canterbury-Bankstown to a 40-18 win against Wyong in Round 5 of the Intrust Super Premiership NSW competition at a hot and sweaty Belmore Sports Ground.

A five-try opening 30-minute period, led by Matt Frawley, set the platform for the home side, with only a late flurry from the visitors adding some respectability to the final scoreline.

The Bulldogs opened the scoring and put their stamp on the game early, with a clever kick from  Frawley falling into the arms of Mason Cerruto in just the eighth minute.

A Fa’amanu Brown try, a simple crash over from dummy-half, consolidated the Bulldogs’ early advantage, following a clever short ball from Frawley that put Canterbury deep into Wyong territory.

The Bulldogs through Brown crashed over for their third in the 21st minute, another quick play-the-ball after a bustling resulting Jayden Okunbur run resulting in a simple four-pointer. Martin’s second conversion of the match took the Bulldogs’ advantage to 16.

Frawley found himself in the action again following a strong Francis Tualau charge, bursting through the line just inside Wyong territory before burning into the backfield and setting up Martin to score. Martin’s conversion took it to 22-0.

The Bulldogs added more pain to Wyong to make it five tries the set after, spreading the ball on the halfway line with Frawley lobbing a bounce pass over the top that fortuitously found John Olive in space, burning into backfield before drawing the last Wyong defender and putting Reimis Smith over. Martin’s laser-like conversion from the sideline took the score to 28-0 after just 30 minutes.

The Roos, however, were soon stung into action, their next attacking set sweeping the ball to a flying Sitili Toupounuia, propelling him into a yawning gap to open their account. Josh Mantellato’s conversion cut the Bulldogs’ lead to 22 at the break.

The Bulldogs started the second half the way they began the first, a simple step from Frawley and some upper-body strength seeing him wrestle across the line.

The Roos, however, hit back soon after, back-rower Chris Smith crashing through some uncharacteristically flimsy Bulldogs defence.

And they completely changed momentum, albeit briefly, following a scrappy fifth-play option that ended in the arms of fullback Luke Sharpe. The diminutive No.1 put a grubber through into the in-goal area, chasing the ball to score Wyong’s third.

The Bulldogs, however, eventually put the game to bed in the 71st minute, a beautiful team try set up by Tualau and front-row team-mate Renouf To’Omaga, supported by Cleeland and eventually scored by Lachlan Burr.

Next week the high-flying Bulldogs, second on the table behind Western Suburbs, head to Penrith while the Roos travel to WIN Stadium to face the Dragons.

It was billed as a close one, but it's a big Round 5 win for the @NRL_Bulldogs! 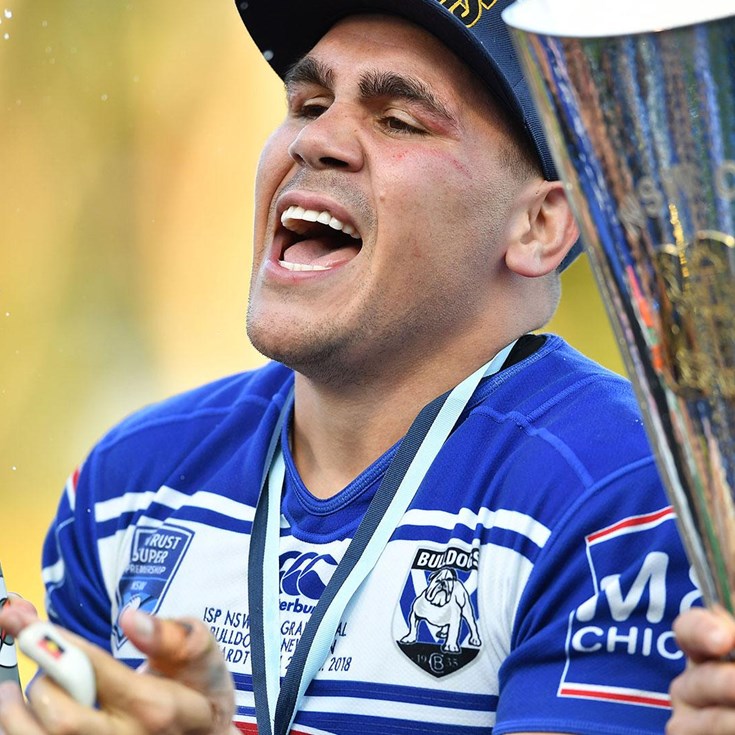