Inspired by the return of a host of NRL-regulars, the Bulldogs edged a valiant Roos outfit –who to their credit – gave their all from the first whistle, until the last.

A try to Rhyse Martin with near on 15 minutes to play broke the Roos' collective backs, as the long-range effort all-but assured Steve Georgallis' men a Week Three berth.

But it was the hero for the Roos in Week One, Sean O'Sullivan, who got Wyong off to the perfect start with his try in just the fifth minute of play.

Trailing through a kick from halves partner Mitch Cornish, O'Sullivan scooped up a loose ball at full speed to touch down under the posts to score.

O'Sullivan converted his own try to give the Roos a 6-0 lead.

The Bulldogs were quick to respond, and did so through half-turn-hooker Fa'amanu Brown, who crossed in familiar style with a darting run from dummy-half.

The returning Martin slotted the extras to level the scores at 6-6.

A six-point deficit soon became a six-point lead for the Bulldogs when five-eighth Josh Cleeland backed up the work of his No.9 to run through the Roos defence from close range for the side's second try.

Again, the sharp-shooting Martin converted, taking the Bulldogs to a 12-6 front.

The Roos were their own worst enemies for much of the first-half when without ball in hand, but when they got their discipline in order, again Wyong found more points.

Second time around O'Sullivan turned provider for Cornish, who off another Roos kick, snaffled the ball amongst Bulldogs defenders to plant down.

O'Sullivan's boot again added the extras to level the scores at 12.

The momentum had looked to have swung in favour of the Roos, who again won back possession in good territory on the back of a Bulldogs dropped ball.

Packing a scrum, 10 metres away from the try line they were seeking, the Roos went for an early shift – only for a Luke Sharpe pass to be intercepted by the Bulldogs' Jayden Okunbor, who ran the better part of 90 metres to score his side's third try.

Martin converted from in front of the uprights, ensuring the Bulldogs took a six-point, 18-12 lead into the sheds at half-time.

The match ebbed-and-flowed in the second-half as it did in the first, and Wyong hit back courtesy of Sitili Tupouniua's four-pointer.

O'Sullivan laid on a deft short ball at the line to have his backrower into space, and the crafty No.6 converted the try to tie the scores at 18.

Wyong took the lead in the 58th minute of play when Nat Butcher cut through the Bulldogs' defence to score, but their time in front was short-lived – as it was earlier in the match.

John Olive replied with his close-range effort in the 61st minute, before Martin split the Roos' middle defenders to run 60 metres to score.

Leading by six points, experienced Bulldogs halfback Matt Frawley looked to extend the margin beyond a converted try, but his 73rd-minute field-goal attempt cannoned into the cross bar.

The would-be one-pointer mattered little though, as talented centre Morgan Harper iced the match for the Bulldogs with his 76th-minute try. 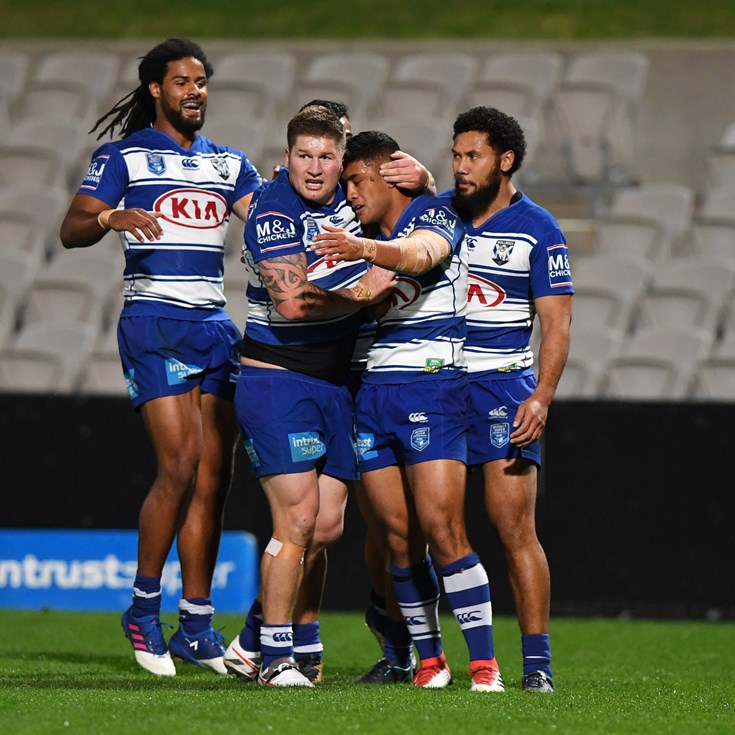