For Canterbury players, it was an empty feeling in an empty stadium – except for the parents and girlfriend of rookie Jake Averillo.

With Mick and Bev Averillo allowed into ANZ Stadium, along with the 19-year-old’s girlfriend Charli, for his debut against North Queensland on Thursday night, the record for the lowest crowd in NRL history now officially stands at three.

What they also witnessed was a fascinating insight into the game as every sound was amplified during the first NRL match played in a closed stadium, from the contact in tackles to the instructions yelled to players from the sideline.

At least one member of the Bulldogs coaching staff was warned by the NRL ground manager about swearing because of concerns his colourful language would be picked up by the Channel Nine microphones.

Cowboys enforcer Josh McGuire could also be heard around the ground shouting some choice words to teammates from an exercise bike on the sideline after they conceded two penalties and committed two errors while Bulldogs fullback Dallin Watene-Zelezniak was in the sin bin.

Jason Taumalolo was unstoppable for North Queensland as they stormed to a 24-16 win and every time he ran the ball the Bulldogs would yell, "legs, legs".

Taumalolo's 345 metres from 26 runs with the ball eclipsed the previous record for metres run by a forward set in 2007 by Warriors prop Steve Price (323m), who was one of the 241 people inside the stadium in his role as Canterbury GM of football.

The others included the players, football staff and officials from both clubs, NRL officials, stadium staff, members of the broadcast crew, media and Averillo's parents and girlfriend.

Averillo's father Mick said it was a surreal to be the only spectators at the ground for his NRL debut.

"Yesterday we weren't coming and then we got a phone call saying we were allowed to come. It was the best thing ever," Mick said.

"We are very thankful to whoever decided to do that. It was eerie and weird but is great that we were able to be here."

Each club was permitted 50 accreditations for players and off-field staff but Bulldogs CEO Andrew Hill said they didn't need the full allocation so Averillo was able to invite some family members to witness his debut.

Canterbury lock Adam Elliott said it was noticable that they were the only supporters who came to the fence to greet the players after fulltime.

“A lot of the boys have come through the Under 20s system where you are used to playing in big stadiums with no one in them so it’s a bit of a throwback to that but I probably noticed it most after the game," Elliott said.

"Particularly suffering a tough loss like that it is always good to go over to the fence and see your family and friends.

"The game sort of finished and the adrenalin left the body. It was an empty feeling losing the game - and an empty stadium."

💙 Josh Jackson presents Jake Averillo with his first #NRL jersey in a special presentation ahead of #NRLBulldogsCowboys#proudtobeabulldog pic.twitter.com/JLPaVz6tqB

Elliott said players were so focused on their roles in the match that the lack of crowd wasn't an isssue but they felt it before kick off as well as after fulltime.

“It was probably stranger in the warm-up because that is where you run out and you get your first bit of a lift from the crowd," he said.

“I know it would have been funny for Jake Averillo because in my debut running out for the warm-up was the most people I had seen in the stadium but he has run out to an empty ground, which I suppose is not different to play under 20s.

“Once the whistle blows and the kick-off happens, there is that much going through your head. There are so many things you talk about at training that you want to execute that you just go into auto-pilot in the game.”

Averillo played 26 minutes after coming on to replace halfback Lachlan Lewis, who was benched by Canterbury coach Dean Pay, and the rookie put in the kick for winger Christian Crichton's 79th-minute try.

"He's a talented kid, and I just wanted to give him time," Pay said. "The way the game was flowing I thought he could add something to us."

Pay said he was confident Lewis and Brandon Wakeham were the right halves combination for the Bulldogs but they needed to learn how to control a game better.

"Tonight was a really good learning curve and a real lesson for them in what the team needs," Pay said. 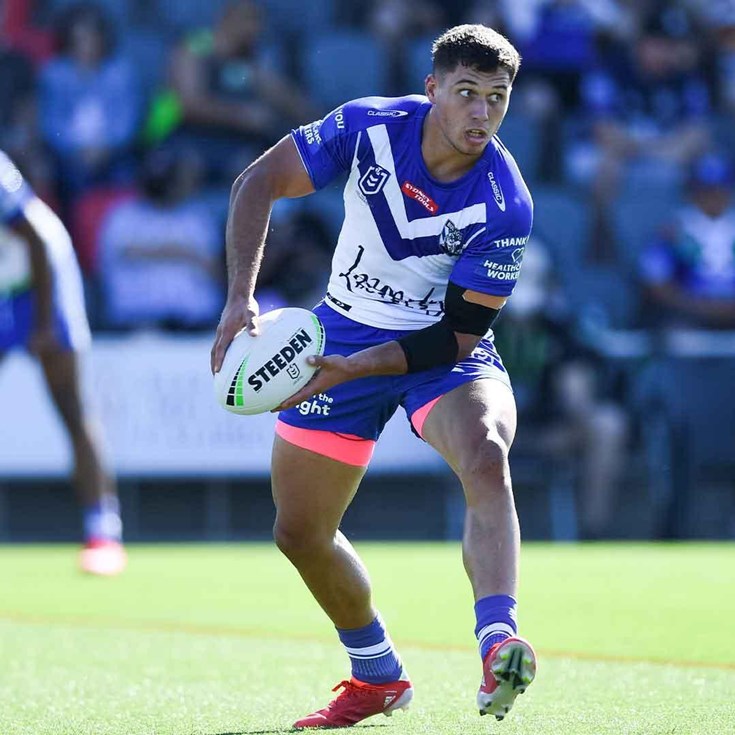