Both the Bulldogs and Cowboys underwhelmed to start the season and need to find their rhythm.

Canterbury defended resolutely but didn't fire in attack in an 8-2 loss to Parramatta, while North Queensland were blown away by Brisbane's forwards in a 28-21 defeat.

The Dogs are the home team at ANZ Stadium but they won't have any supporters behind them, with this match marking the first to be played without a crowd amid the coronavirus pandemic.

Bulldogs: The Bulldogs are 1-17. Only one change to the squad which lost to the Eels with Jake Averillo coming onto the bench to make his NRL debut in place of Kerrod Holland, who has picked up a knee complaint in training. Morgan Harper and Jack Cogger were omitted from the 21-man squad on Wednesday, while Ofahiki Ogden and Sione Katoa dropped off the reserves list an hour before kick-off.

Cowboys: North Queensland are also as named on Tuesday. Josh McGuire returns from suspension in a boost for Paul Green's team. John Asiata reverts to the bench after playing prop last week and Corey Jensen drops out of the 17. Justin O'Neill copped a head knock against Brisbane but is expected to be right to play. Shane Wright and Tom Opacic were omitted 24 hours before game time and Corey Jensen and Jake Clifford made way on game day.

Dallin Watene-Zelezniak v Valentine Holmes. DWZ had a mixed bag last round, making a few errors, but the fullback was easily the Dogs' biggest threat with the ball. He'll have to outpoint Cowboys custodian Holmes, who wasn't electric in his NRL return but showed glimpses of his best including scoring a try.

Where it'll be won and lost

A lot will depend on whether Canterbury can get their offense in order. Their defensive grittiness is admirable but one suspects they'll need at least a few tries to beat North Queensland. For the Cowboys, it's all about staying patient. They pushed the pass too often against Brisbane, leading to breakdowns in play, but looked dangerous at times.

Canterbury showed they can defend extremely well but a lack of points might be something that hurts them in 2020. I thought the Cowboys were extremely poor for the opening of their new stadium. They missed just over 50 tackles and that will need to improve very, very quickly. I did like some of the attacking strengths North Queensland offered, however. Cowboys by 2.

The Bulldogs had 18 ineffective tackles to Parramatta's six in round one and completed 70% (26/37) of their sets. The Cowboys missed a whopping 51 tackles in their first-round loss to Brisbane.

The Bulldogs finished the 2019 season with five wins from their final six games including giant-killing scalps of finals-bound teams Souths, Parramatta and Brisbane – but the team they couldn't beat in that period was the Cowboys, who prevailed 15-9 in their final game at 1300Smiles Stadium. 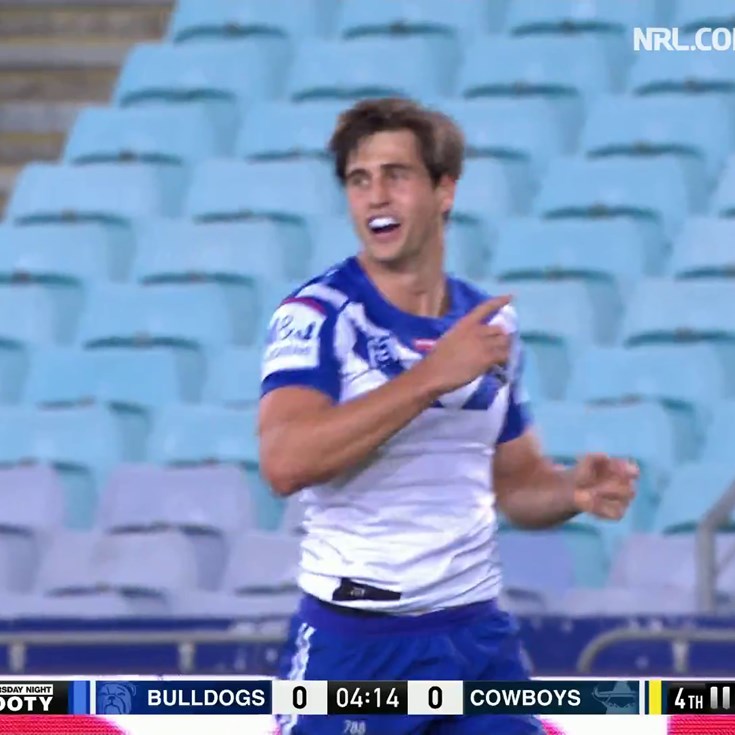 Lewis finishes off a blindside raid

Bulldogs happy to play on