After earning a recall to the Kiwis for the first time since 2017, Foran dislocated his shoulder just six minutes into New Zealand's eventual 12-8 win at Eden Park.

The injury will require surgery and the Bulldogs five-eighth will miss at least six months.

Foran had a reconstruction on the same shoulder in 2016 and this year struggled through hamstring and syndesmosis injuries.

After watching the 29-year-old overcome a spate of previous injuries, and well-documented personal issues, Johnson said Foran could handle the latest setback.

"Seeing the journey he has been on and the amount of resilience he has shown to get himself in a position to represent our country again, the fact that he has got to go through another little hurdle, and I mean little hurdle, [means I'm confident in him]," Johnson said.

"What he's been through really covers what he's about to go through.

"I am really confident he is going to bounce back. He is in a really good place with his body and mentally [now].

"Hopefully he's back [in the NRL], whether it's next season or the season after."

Johnson, who has played alongside Foran for the Kiwis and the Warriors, was among the first to comfort the former Manly and Parramatta player after he left the field clutching his shoulder.

"I was just really gutted for him. I was with him in the sheds when they had to pop it back in and I just sort of stayed with him," Johnson said.

"I have been pretty close with him since we started playing together at Kiwis level and then when he came to the Warriors.

"It's really cool for me to see, and for the rest of his teammates to see [the change in him], and that's probably why it hurts so much to see him have only five or ten minutes out there on the weekend."

The injury to Foran has opened the door for Johnson to return to the side after he was dropped following a poor performance against Australia last month.

Johnson said coach Michael Maguire had made it clear what he needed to work on and what was expected of him in the second Test against Great Britain on Saturday night at Orangetheory Stadium in Christchurch.

"We have got certain standards around our footy side and I didn't meet those in the Australia game.

"I have got certain standards around my performance … I know whether I have met them or not."

After naming Johnson at five-eighth this week Maguire praised the former Golden Boot winner's immediate reaction to the dropping and said he believed he would be better for it.

"When something has been taken away from you you realise how special that is, and I am sure Shaun understands that too," Maguire said.

"I think it's a good test of character to see how you react, and I think that's in Shaun's hands to do that by the way he plays.

"It's just the awareness around his own game … he's got to look at his own game and [ask] 'how do I make sure that I can come in any time I wear the Kiwi jersey at my best?'.

"Moving forward the big thing for Shaun is [achieving] the consistency that we are after at the highest level." 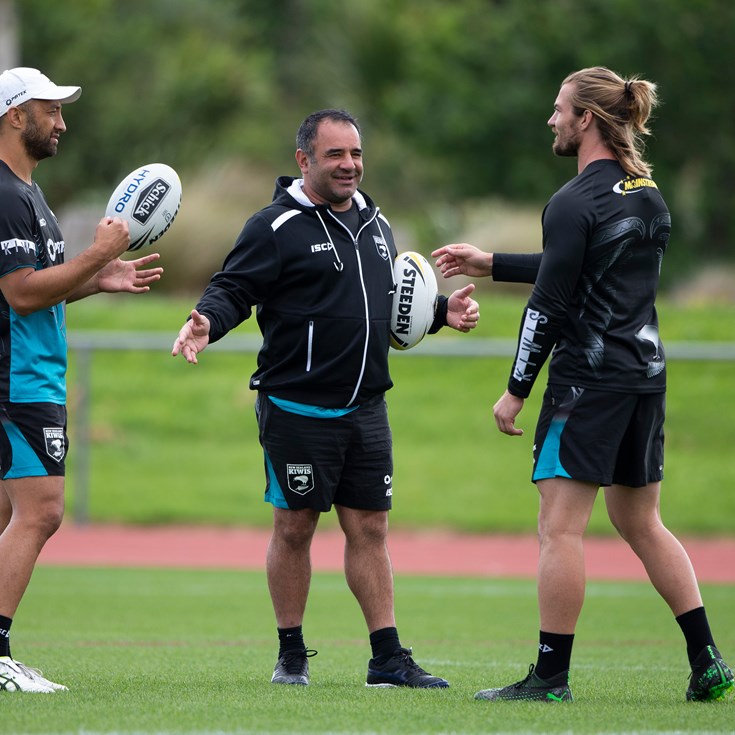