Boosted by the returns of origin and injured stars, both teams sought a crucial two points to boost their season.

Canterbury began strong, scoring just two minutes into the game through a charging Raymond Faitala-Mariner, who ran off a short pass from five-eighth Kieran Foran.

Fullback Nick Meaney was able to convert the try to extend the Dogs’ early lead to six.

It didn't take long however for St George to respond, as a cut-out ball by Ben Hunt found winger Mikaele Ravalawa to touch down for the away side’s first try.

Zac Lomax successfully converted to level the game at 6-6.

St George were able to extend their lead shortly after, as a break down the sideline allowed Ravalawa to set up a try for returning five-eighth Corey Norman.

Lomax was successful in doubling his side’s lead, taking the score to 12-6 after fifteen minutes.

With the Dragons side looking threatening, Jonus Pearson added to their lead, going over in the corner to score his side’s third try for the game.

Zac Lomax again converted, to increase the margin to two converted tries, taking the game to 18-6 at half time.

The Dragons’ dominance continued in the second half, after Ben Hunt found space near the line through a Corey Norman pass to increase the margin to twenty two.

Lomax kept his flawless kicking streak going, as he added another two points for his side.

The Bulldogs found it hard to get back in the game, as Zac Lomax went over for the Dragons’ fifth try off a Jacob Host kick.

Lomax successfully converted his own try, taking his tally to five out of five.

The Bulldogs refused to lie down though, as Danny Fualalo placed Kieran Foran through a hole, for the five-eighth to score near the posts.

Dragons however were quick to retaliate as a Bulldogs error resulted in Ravalawa’s second try of the night, diving over in the corner off another Dragons spread.

Lomax converted yet again from the corner to re-establish his side’s twenty four-point lead.

Although the Dogs side did not give up their fight, it couldn't prove enough as they went down 36-12 to the St George Dragons. 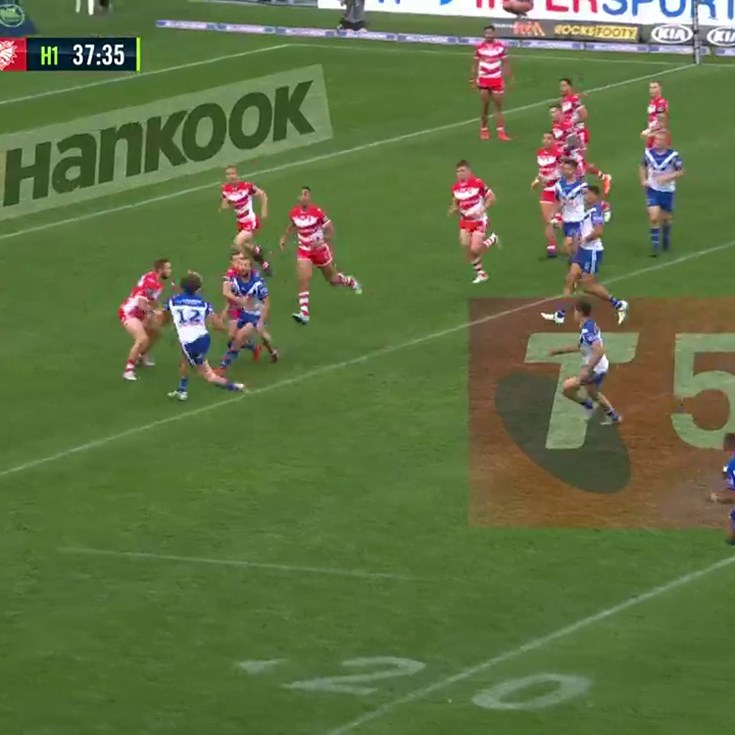 Faitala-Mariner slams the ball down