Formerly known as Belmore Oval, the Belmore Sports Ground was first opened in 1920.

It was originally a circle shaped ground before being redeveloped and re-opened as a rectangular ground in 1968.

Belmore would host its first rugby league game in 1936, shortly after the Canterbury-Bankstown Bulldogs were founded.

Since then, the ground has staged 665 first grade rugby league matches, with number 666 taking place on Sunday.

History of The Grandstand and the Hill:

In 1935, the local council purchased a large stand from the Sydney Cricket Ground which was to be re-erected at Belmore as part of unemployment relief works.

The stand would be opened on 14th March 1936 by mayor SE Parry, and was named in his honour.

The ground was redeveloped into a rectangular venue in 1968, although the Parry Stand would remain for another 12 years before it was demolished, and the still-standing Stewart Stand built in its place in 1980.

Named after Frank Stewart and his family of lifelong Bulldogs supporters, Frank was captain of the 1947 third grade team that played in that year’s final against Easts.

After his retirement, Stewart became a federal politician, and was a Minister within the Whitlam government.

The stand also undertook a large upgrade done for the 1996 season, which included a new bar and increased capacity.

The bar, which is no longer in use, is named in honour of legendary Bulldog, Steve Mortimer.

The main hill has been known as the Terry Lamb Family Hill since 1993.

Moore served the club from 1969 to 1995, a period in which the club reached the finals in 20 of 26 seasons, a truly remarkable run of success.

The club won five premierships with Bullfrog at the helm, including four from 1980-85, a period which remains the most successful in the clubs 84-year history.

The ground attendance record was set on 12 April 1993 where in Round 5 of the NSWRL season, 27,804 spectators saw the Bulldogs defeat the Parramatta Eels 42–6 in the club’s first Multicultural Day game.

Tries on the day included a hat-trick from Brett Dallas. Peter “Bulldog” Moore was ecstatic after the game, remarking that it was “one of the greatest days in the club’s history”.

In recent years, the stadium has dropped to a capacity of just over 19,000, with the Bulldogs clash against the Cronulla Sharks in round 20 of the 2015 NRL season the largest crowd since the revision at a totally sold out 19,005.

The highest scoring rugby league game in the ground’s history was played between Canterbury and the Hunter Mariners in the 1997 Super League season. Taking place on 12 May 1997, Canterbury won the game 48-36, with the teams combining to amass a whopping 84 points on the day.

Belmore was also home to one of rugby league’s lowest ever scoring games, as the Parramatta Eels defeated Manly 4-0 on 28th March 1982.

Of all the active or semi-active grounds still used by the NRL, Belmore sits fourth in terms of games hosted, behind only the Sydney Cricket Ground, Leichhardt Oval and Brookvale Oval.

Belmore is one of only six current NRL grounds to have hosted games in the breakaway Super League, joined by Mt. Smart Stadium (Auckland), GIO Stadium (Canberra), Penrith Stadium, Shark Park and 1300Smiles Stadium (Townsville) in this rare distinction.

The Canterbury-Bankstown Bulldogs aren’t the only NRL club to have called Belmore home.

In fact, two other clubs have tenanted Belmore over the years, with the Parramatta Eels playing their home games at Belmore from 1982 until the end of 1985 during the construction of Parramatta Stadium, while the St. George Dragons also played out of Belmore in 1988 as Kogarah Oval was redeveloped.

Additionally, Belmore is also home to Sydney Olympic FC, a soccer club founded by the local Greek community in 1957 as Pan-Hellenic Soccer Club.

The 1998 season marked the farewell to Belmore Sports Ground as the Bulldogs home ground.

The decision to leave Belmore upset many of the Bulldogs' loyal supporters who were reluctant to relocate given the club’s rich history of success at the ground.

Belmore had been the club’s home for 547 matches between 1936 and 1998, and the Bulldogs had a great record on home soil.

Despite the opposition, the club moved to Telstra Stadium, now ANZ Stadium for the 1999 season.

ANZ has acted as the club’s primary home ground ever since and was even home to club’s head office for a period of six years from 2005 to 2011, before the Federal Government committed $5 million to help refurbish the outdated suburban stadium they had left many years ago.

Taking place throughout 2010 and into 2011, the redevelopment of Belmore’s facilities, including the creation of the Bulldogs Centre of Excellence allowed the club to move all its administrative and football operations back to its spiritual home on a permanent basis after several years spent at Homebush.

The upgrade would mean a total overhaul of the Stewart Stand including new offices for the club administration and football staff, as well as a state-of-the-art training centre with new rehab facilities, a theatrette and lecture rooms, fully equipped kitchen, physio room, new dressing rooms and an indoor running track extending out of glass doors and directly onto the playing field.

The Bulldogs COE is considered one of the best training facilities in the NRL, and the redeveloped Belmore acted as a key cog in opening the door for NRL games to be played at the ground again, with the club making it clear that it had every intention of bringing first grade footy back to its home.

In 2015 that dream would become a reality.

Following a large push from the club’s supporters, helped by the redevelopment of Belmore, then club CEO Raelene Castle made the monumental announcement that the Bulldogs would return to their spiritual home for the first time in 17 years, heading Back to Belmore for two games to celebrate its 80th Anniversary during the 2015 NRL season.

The first of the three Back to Belmore games took place on 29th June 2015, which saw the Bulldogs trounce the Melbourne Storm 20-4 in front of 16,764 fans, with a second game against the Cronulla Sharks being played in front of a sell-out crowd of 19,005. Since then the ‘Dogs have played a further seven NRL matches at Belmore, with the games becoming a much-anticipated fixture on the NRL calendar.

The Bulldogs return to their spiritual home, the historic Belmore Sports Ground this Sunday May 26th to take on the Melbourne Storm, kick-off 2pm.

Marcelo Montoya, who is set to play his 100th Bulldogs game has labelled Belmore “a special ground” while Corey Harawira-Naera has expressed his excitement over playing his first NRL game at the famous stadium.

The game is a chance to relive the history of this great club, blending old and new to create a rugby league experience like no other. 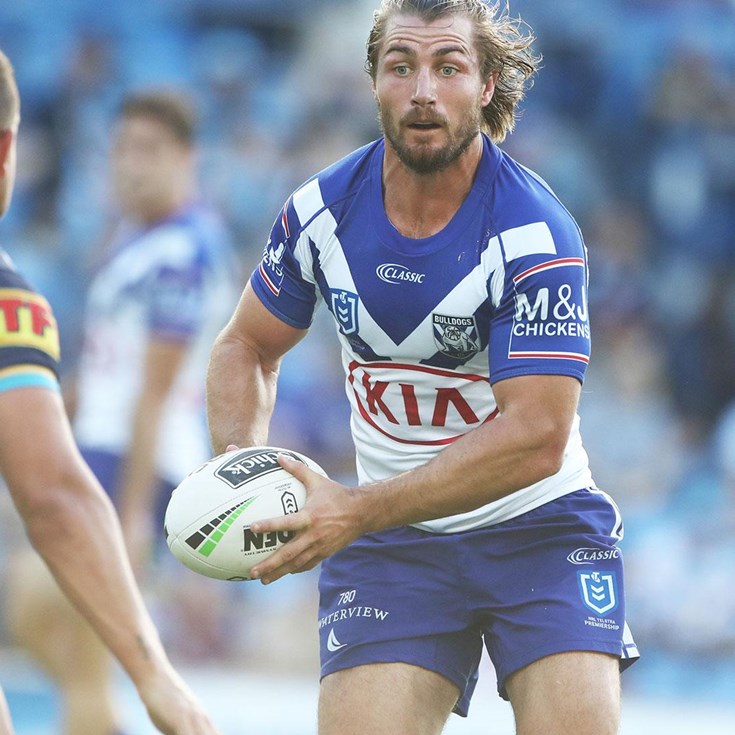