A powerful start from Canterbury fell just short in Melbourne on Sunday as injuries and fatigue set in, with the Storm coming back to win an 18-16 thriller.

The Storm maintained their unbeaten start to the season having trailed 12-0 midway through the first half against a fired-up Bulldogs outfit looking to continue their recent dominance in Melbourne, running in three unanswered tries either side of half time to take control of the match.

A try from Reimis Smith with two minutes remaining gave the visitors hope, but a Rhyse Martin conversion that would have tied the scores in the final minute was off target as the Storm held on to stand alone atop the Telstra Premiership ladder after four rounds of 2019.

There was no point-scoring record for veteran skipper Cameron Smith as the Storm failed to find their usual attacking groove, but the experienced hooker played an important role in helping his side fight back from their early deficit.

Smith's guidance was vital for a Storm side missing electric winger Josh Addo-Carr due to personal reasons and the veteran was crucial in many of the hosts' tries.

Although he landed a perfect three-from-three with the boot, he still requires a further three points to pass Hazem El Masri and become the leading point scorer in NRL history.

While the Bulldogs will be disappointed to be leaving Melbourne empty-handed, they will be buoyed by the fact they threatened to cause another big upset and win for a fourth straight time in Melbourne.

The gallant Bulldogs lost veteran big man Dylan Napa to an ankle problem in the 15th minute of the match and were even down to two on the bench at one stage as Corey Harawira-Naera was sent for an HIA after a big collision.

Halves Jack Cogger and Lachlan Lewis looked like they had been playing alongside each other for years and with a bit of luck the visitors could have easily sent the match into extra time.

The Bulldogs opened the scoring early with Kerrod Holland touching down in the third minute.

The visitors continued to press the Storm's right side defence and they duly doubled their advantage midway through the first half when Jayden Okunbor finished off some quick ball movement.

Those two tries stung the Storm into action as the home crowd got behind the competition pacesetters with Dale Finucane going close and Christian Welch having a try disallowed for obstruction.

It was a case of third time lucky for the Storm shortly after as Will Chambers was awarded a penalty try to have the hosts within six as the teams went to the sheds.

All the momentum was with the Storm and when Cameron Smith picked out Tui Kamikamica to help the hosts draw level early in the second half, it looked like the 15,432-strong crowd was going to go home happy.

The Bulldogs were trying to hold on, but with a little over 10 minutes remaining Cameron Munster touched down almost untouched as the Storm took their first lead of the night and appeared to be in control.

Reimis Smith's dramatic late try gave the Bulldogs a sniff, but the usually accurate Martin couldn't convert as the hosts held on. 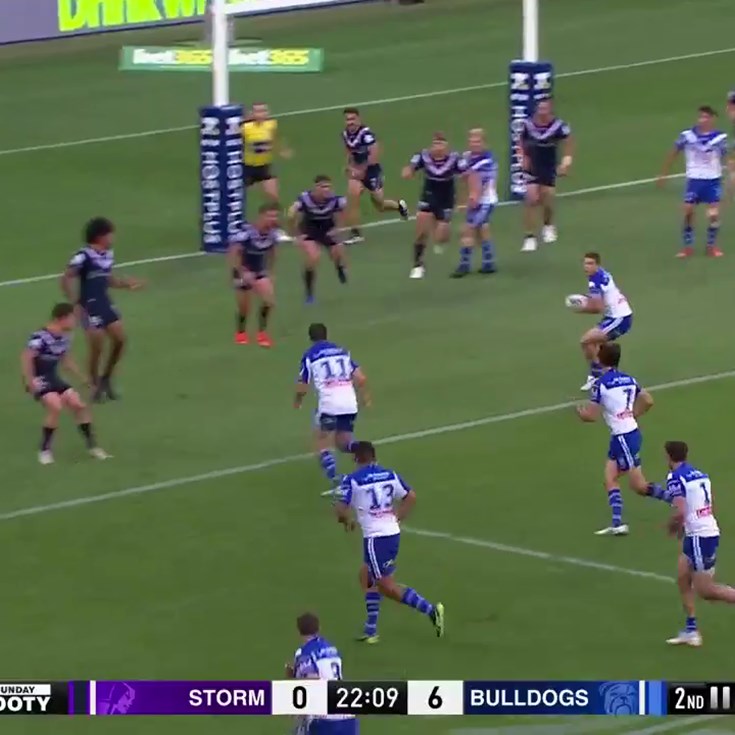