Dylan Napa joined the Bulldogs this year and has a pet bulldog called 'Julio'. This is widely known.

What is not common knowledge is that Napa had never scored tries in consecutive games in his seven NRL seasons - until now.

After crossing for a rare try in the round two loss to Parramatta, Napa surprised himself as much as his teammates when he scored again in last week's 22-8 defeat of the Tigers.

Then again, he hadn't scored at all in his last two years with the Roosters (2017-2018), so it's a welcome return for a part of his game that had been eluding him.

"I felt pretty lucky. That try on the weekend I'd just come onto the field so I felt fresher and that's why I was pushing up," Napa said.

Once in the points-scoring mood, it was hard to stop the 26-year-old. He set up a try 11 minutes later for roommate Adam Elliott in the 48th minute of the 22-8 win over the Tigers.

"It's really nice to score tries or be amongst them, but I'd trade all that just to get wins any day of the week."

Front-rower Napa and second-rower Elliott are enjoying the partnership emerging on and off the field.

"Building continuously on that partnership out on the field is something we've been working on since day one.

"Hopefully there's more of us linking up and feeding off each other."

Add in Aiden Tolman, Josh Jackson and Ofahiki Ogden and that's a middle that the Melbourne Storm will be highly respectful of on Sunday when the clubs meet at AAMI Park.

"Those relationships start on the training park. If you train it, work it, then it becomes easier come game time," Napa said.

"Even more pleasing is that we have five changes to our team [for Tigers] and it came together well. I'd like to rap Nick Meaney at fullback. It was his first game and everyone said he was a great runner but with that swirling wind out at Campbelltown he took every high ball and didn't miss a beat.

"It's another big test this weekend – the dynasty that is Melbourne. But they've got 13 players and we've got 13 starting players as well."

And Elliott is very glad Napa is in their pack.

"He's been a big confidence-booster for our team. He was the missing link so to speak to know that we had a pack that could be really damaging in the comp this year," Elliott said.

"He's added another string to my bow to have him running off me, or me running off him. It's a good partnership."

The moment that ruled Foran out for three months

Round three secured Bulldogs their first win, now for round four.

"There's been plenty of smiles around the place," Elliott said. "We're a pretty youthful team so for us hopefully backing up is not going to be a problem for us physically."

It has been a problem for five-eighth Kieran Foran, who will miss the next three months with ankle syndesmosis.

That brings Meaney's former Newcastle teammate Jack Cogger into the halves for his first run in Bulldogs colours. 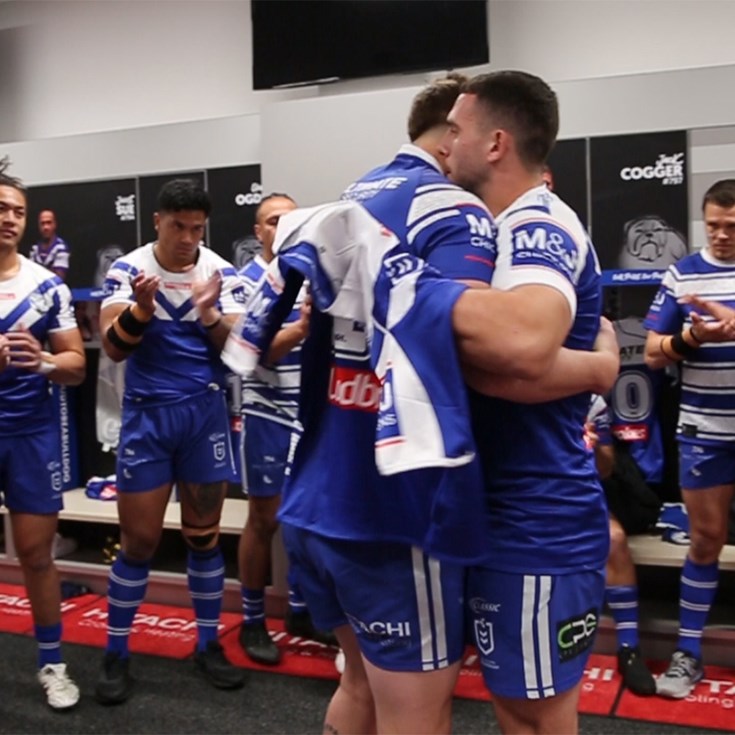