They were dubbed wooden spoon favourites before a ball was kicked but the Bulldogs proved there is still plenty of fight left in the famous club.

The first half of the season lived up to what many predicted with the Bulldogs slumping to the bottom of the ladder with 11 losses from 14 games.

However, a hard-fought win over Cronulla was followed up by a six-point victory in Newcastle and suddenly the Bulldogs had established themselves as giant killers.

The arrival of Dallin Watene-Zelezniak before June 30 proved a turning point for the club with the side going on to win five of their last eight games.

Recruits Dylan Napa, Corey Harawira-Naera, Nick Meaney and Jack Cogger delivered enough in their first years to build on in 2020.

Kieran Foran's return from a luckless run of injury was also another big talking point late in the season.

Home and Away record

An even spread of five wins at home and away was reflected in the side's ladder position.

Their second win of the season at ANZ Stadium didn't come until June but they finished strongly to win their last three at that venue.

Two successful trips to Bankwest Stadium will also give the club plenty of confidence for when they make the temporary move there from July as part of the ANZ Stadium redevelopment.

Canterbury ranked 12th in the competition for accumulating metres after contact following their second-place ranking in 2018.

The loss of David Klemmer to Newcastle was always going to be tough to replace in this area after he averaged 75m per game in the blue and white.

Aiden Tolman and Dylan Napa produced solid numbers in the Klemmer's absence, as did rookie Jayden Okunbor and Tonga international Will Hopoate.

In unhappy news, the Bulldogs conceded the most post-contact metres of any side in 2019 with 512m on average.

They struggled with a total of only 11 in the opening quarter of games across 24 outings.

The Bulldogs favoured their right edge over the left side in try-scoring measures with a combined 27 for the season.

Reimis Smith finished the season as leading Bulldogs try-scorer with 15, while centre partner Will Hopoate and Penrith recruit Corey Harawira-Naera crossed the line on five occasions each.

The left channel totalled 21 tries, while the centre of the paddock delivered eight.

The Bulldogs' woes in defence came through the middle and on both edges in 2019.

The left channel conceded the most tries with 34 in total with the left centre-wing combination struggling with 28.

The right edge was marginally better with 27 conceded, including 20 on the far-right edge.

The middle of the field conceded an additional 10 to what they scored in attack.

The centre-left and centre-right channels finished amongst the best in the competition.

A total of 28 penalties resulted in tries throughout the season in the following set after conceding with the club ranked equal fourth-worst in this department.

It contributed to 35 per cent of the tries they conceded (79) overall for the season.

Canterbury finished the year ranked second for offloads with 299 (12.5 average per game) but in return conceded the most at 11.3 per outing.

They made an additional 2075 metres for the season through offloads at 86.6m per game.

Corey Harawira-Naera led the competition for offloads with 59 ahead of Broncos forward Tevita Pangai and Sharks prop Andrew Fifita.

Harawira-Naera, Will Hopoate and Reimis Smith were among the big beneficiaries of making yardage following an offload.

The Bulldogs' ability to keep the ball alive was not an issue for the season but in the end, they struggled to turn the second phase play into points.

The Bulldogs had one of the sharpest shooters in the game to start the season but the loss of Rhyse Martin to the Super League mid-year left them needing another first-choice kicker.

Kerrod Holland slotted six goals during the season but the main duties were left to Knights recruit Nick Meaney, who finished with 32 goals for the season at an 80 per cent strike rate.

Canterbury finished with 76.1 per cent of conversions overall, missing a possible 32 points across the 24 games.

None of the missed goals could've turned any losses to a winning result, although they had a chance to level against Melbourne in round four at AAMI Park after the fulltime siren.

It was an area NRL.com looked at prior to the season and unfortunately for the Bulldogs they couldn't improve on their last-placed finish from the 2018 season.

North Queensland were only marginally better but following that the Panthers were next best with an additional 105 for the season.

This statistic ultimately comes down to the individual players in the line-up and how destructive they can be.

Will Hopoate (74) and Nick Meaney (61) were the side's best but were well behind NRL leaders like James Tedesco (147) and Josh Dugan (107) in the same positions.

Mid-season signing Dallin Watene-Zelezniak averaged four tackle busts per game from his 10 appearances and is the type of X-factor required.

Canterbury finished the season with the third-best metres recorded per set despite ranking 10th overall for total metres gained across the 24 games.

They averaged 43.3 metres per six-tackle set to fall behind eventual premiers Sydney Roosters and the Warriors.

Given the Bulldogs were also the least error-riddled of the competition, the factor for this figure can mainly be put down to possession.

The Bulldogs averaged just 48 per cent possession on average per game, the lowest of any other side, with the NRL average sitting at an even 50.

Newcastle, St George Illawarra, Gold Coast and the Warriors were all above them in the bottom five with all also missing the finals.

Injuries to playmakers Kieran Foran, Jack Cogger and Lachlan Lewis at various stages throughout the season meant plenty of shuffling in the halves but the side was still solid in this area.

Canterbury finished in the top three for most kick metres for the season - a far better result than their 10th spot ranking in 2018.

Lewis played two games less than Cogger but churned out 5366 kick metres for the season at an average of 357.7 per game.

He finished fifth overall in the NRL behind the likes of Mitchell Moses and Anthony Milford with the healthy average and was well supported by Cogger who managed an average of 301.1 per game. 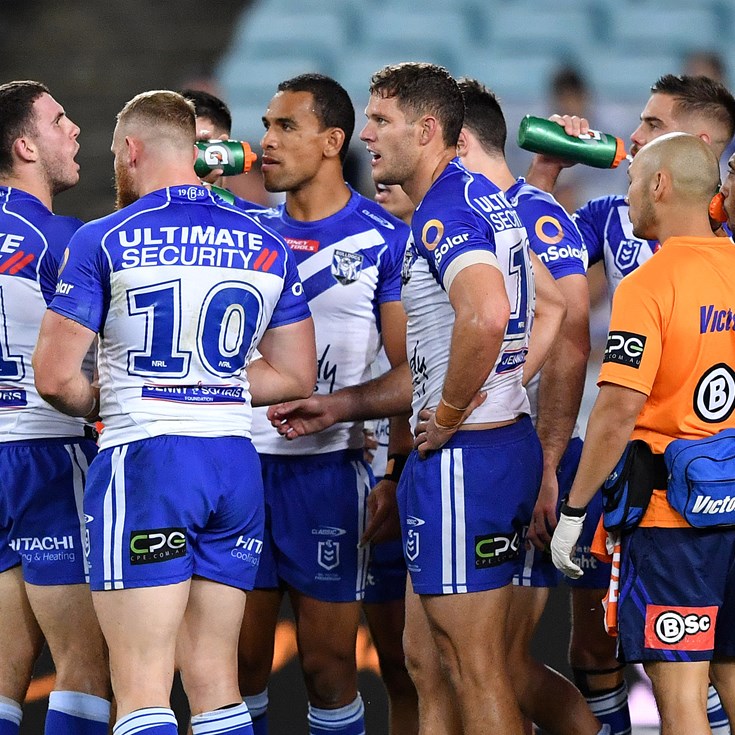