Apparently Bulldogs backrower Josh Jackson practises kicking grubbers at Belmore Oval all the time. And the 27-year-old Canterbury skipper chose the perfect moment to test out those skills in the pressure cooker atmosphere of a tight finish.

It was the Gulgong Terriers junior's finesse in the 72nd minute which forced an error from Parramatta fullback Clint Gutherson in-goal and ultimately handed the Bulldogs a 20-12 victory.

Jackson's back-row buddy Adam Elliott pounced on the loose ball and the Bulldogs were on the road to an unlikely victory from a most unlikely kicking source.

The Dogs had trailed 12-10 at half time and drew level through a penalty goal in the 55th minute before the match settled into a grind. Memories of last week's controversial 22-20 loss to the Brisbane Broncos were still fresh but the Bulldogs were rewarded for their persistence in a bizarre finish.

"It was a pretty lucky one," Jackson said post-match of his kick. "I thought it was going dead as I was chasing it pretty hard. I'm glad Adam was chasing it too."

While South Sydney's John Sutton and Cronulla's Wade Graham are edge players renowned for probing the ball in-goal, Jackson is not a NRL forward who regularly kicks close to the line.

"He practises them all the time at training," intercedes Bulldogs coach Dean Pay.

And it was just the type of luck Pay's men needed to secure their third win of the 2018 Telstra Premiership season.

More evidence of the 'rub of the green' came when Eels winger George Jennings appeared to collect a high kick just behind his try line to earn a 20-metre restart. But referee Ashley Klein said he had put a foot on the chalk, which meant possession reverted to the Bulldogs from a goal-line dropout. The Dogs scored off the next set.

"We've missed out on a few of those calls so when a couple go our way, we're certainly happy to take them," Pay said.

"We weren't the prettiest team out there tonight, that's for sure, but we found a way to win. And we just haven't been doing that.

And the turning of the tide just might kick-start the Dogs, although they will need plenty more to go their way to make the finals.

Still their round 10 victory pushed them from 15th to 12th spot on the NRL ladder – with five matches still to be played this weekend – but at least they are heading north.

"It's going to help," Pay said. "There's nothing like winning to give yourself a bit of confidence."

The Bulldogs travel to Southern Cross Stadium next Sunday to tackle the Cronulla Sharks. 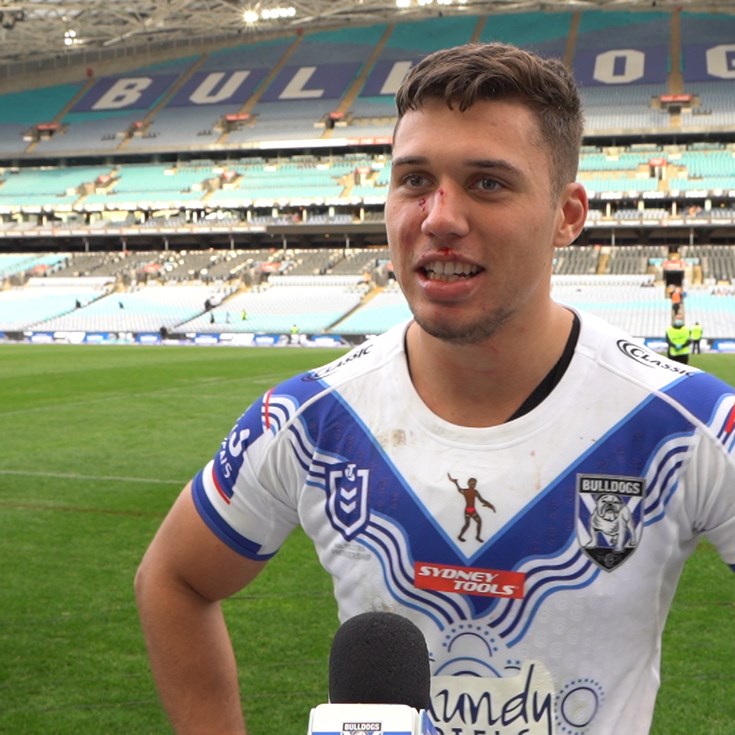 Lafai: It's good to be back