The 5 things you need to know about the round 18 clash between the Canterbury-Bankstown Bulldogs and the Brisbane Broncos at ANZ Stadium.

Both sides have won four games each out of the past eight clashes and although the Brisbane Broncos have won the last three between these two sides, the Bulldogs have won three of the last four at ANZ Stadium with both sides holding a six and six record between the two at the home of the 2000 Olympic games.

The Bulldogs back three and edge defence will have their work cut out for them on Saturday night and if they're not on their game, than this number will continue to climb at ANZ Stadium.

Curtis Rona has been one of the buys of the season in 2015 and with 16 tries next to his name, he sits on top of the NRL try-scoring list alongside Semi Radradra.

He has scored more tries than games played in 2015, but it's his ability to score tries at ANZ Stadium that has been a real highlight.

Rona has 11 tries from nine games at ANZ Stadium, including three doubles.

Rona will have the opportunity to continue his great run of scoring tries at ANZ Stadium against the Brisbane Broncos. The battle of two of the most exciting prospects in our game should be one for all to enjoy on Saturday night.

Mbye has been one of the Bulldogs most consistent players in 2015 although at times playing in a number of positions, while Milford has made a great fist of his new position after a bit of a slow start to the year.

Milford plays of the cuff and is a dynamic support player who has bagged eight tries this year to Mbye's three, but it's been the Bulldogs general that leads the way in try assists, 6-5.

Both have been earmarked as future Queenslanders and on Staurday night they will show everyone why they are two of the most exciting halves in the competition. 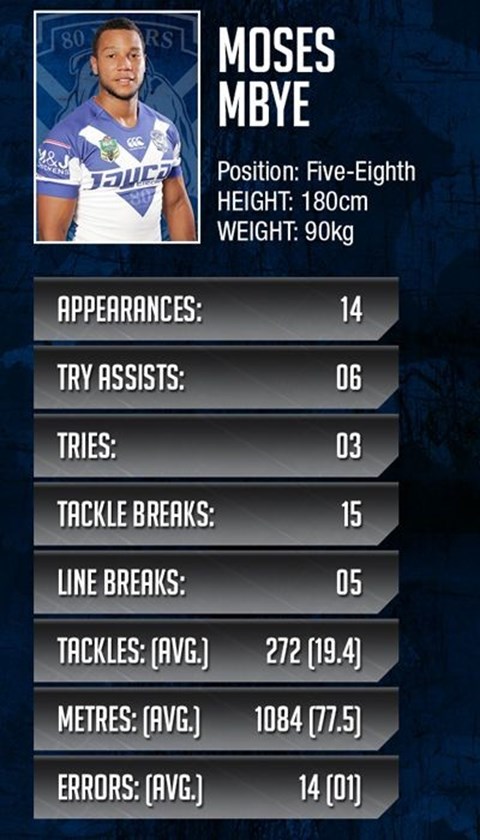 Nine players will be backing up for Saturday's clash between two of the heavy weights of the competition after the Origin decider that saw Queensland win 52-6. Five Bulldogs players and four for the Broncos.

Justin Hodges was not named by Wayne Bennett and will be rested from the clash, so with a large number of rep players backing up, it will be up to the others from both squads to lift their stars for what should be the match of the round.