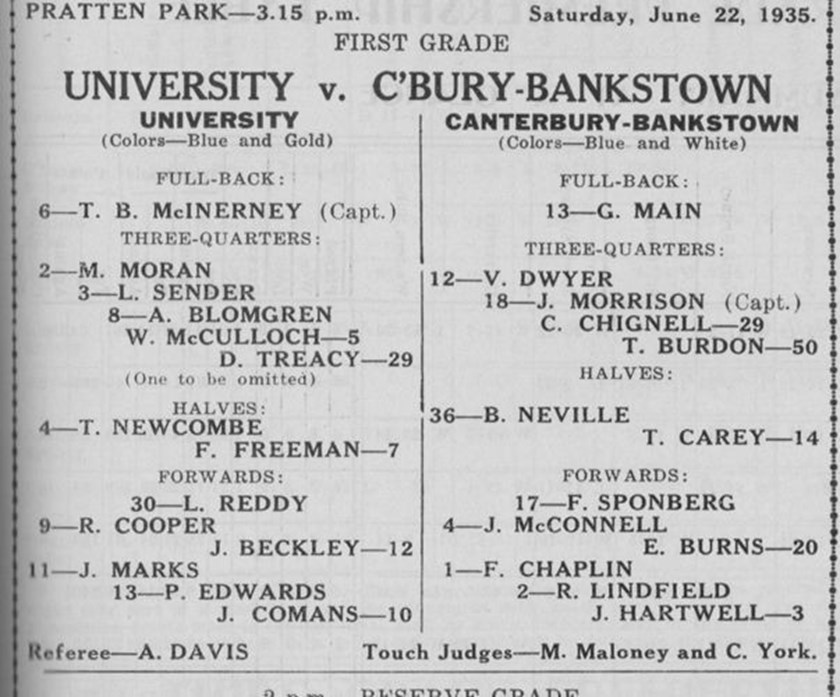 The meeting of these teams was looked to with some interests, as it was considered that, the calibre of the teams being about equal, they would provide an even display.

That anticipation was realised to a certain extent only; in fact, only during the first half of the game, during which University was slightly the better side, notwithstanding that the scores at the interval were five points to two in favour of Canterbury-Bankstown.

In the early parts of the session University was getting the ball from the scrums, and frequently stormed Canterbury-Bankstown's line, but faulty handling and lack of support lost at least a couple of tries.

Toward the end of the session Canterbury-Bankstown's weight was beginning to tell on University, whose play became ragged.

Lindfield was also getting the ball in the scrums, and the backs consequently were seen to better advantage, Carey, Elliott, Morrison, and Burdon being prominent in sparkling rushes, one of which was a forerunner to a neat try just as the bell rang.

In the second half, Canterbury-Bankstown, playing with much better combination, completely dominated the game, adding two converted tries and three penalty goals, while University did not improve its halftime position.

Main was in good form, and kicked six goals, as well as playing a splendid game at fullback. Carey, Elliott and Burdon were good backs, and Morrison imparted a good deal of life into the play.

The outstanding forwards were Sponberg, McConnell and Burns.