The Canterbury-Bankstown Bulldogs have suffered an eight-point loss to the South Sydney Rabbitohs at Cbus Super Stadium to close out round 18.

Jayden Okunbor made his first appearance of the season after suffering an ACL injury in round 20 last year, while Matt Doorey returned from concussion and Ofahiki Ogden was included on the bench.

The Rabbitohs rested Latrell Mitchell and lost Liam Knight and Campbell Graham (both HIA), as well as Alex Johnston (hamstring) through the match.

The Bulldogs led 12-10 at the break, before the third placed Bunnies ran in four tries to two in the second half to claim a 32-24 win.

Taane Milne was denied a try in the 8th minute thanks to desperate defence from Lachlan Lewis to force an error out of the winger, but Milne scored five minutes later to give South Sydney an early 4-0 lead.

Alex Johnston collected his 23rd try of the season in the 18th minute before Jaydn Su'A bombed a try to extend the red and greens lead.

Trailing 10-0, rookie Bailey Biondi-Odo produced some sharp work out of dummy-half to split the Rabbitohs markers and set up a try for Aaron Schoupp to have the Dogs behind by four.

Further points were added from the Bulldogs five minutes later when a lovely catch-and-pass from Will Hopoate put Corey Allan away down the right touchline to score in the corner. Jake Averillo's second straight sideline conversion handed the Bulldogs a 12-10 lead at the break.

Right on half-time five-eighth Lewis was sin-binned for an incident involving Cody Walker after the siren had sounded to see the Dog start the second half with 12 men.

Johnston added his second try of the night in the opening minute of the second 40, but injured his hamstring in the act of scoring, which forced him from the field before Adam Reynolds added a penalty goal in the 46th minute to see Souths lead 18-12.

Sione Katoa came up with a brilliant play in the 52nd minute when he landed a 40/20 to have the Dogs on the attack.

Lewis returned from the sin bin to send Okunbor over in the corner for his first try of 2021 and when Averillo slotted his third straight conversion from the sideline, the score was locked up at 18-all.

South Sydney would hit back with back-to-back tries to Jacob Host and Cam Murray to lead 28-18 with 15 minutes left in the match.

In his third game of NRL, Biondi-Odo pounced for his first career try after Host dropped a pass and the ball bounced up into the dummy half’s hands. Averillo added a further two points to close the Souths lead to four.

A 73rd minute try to Mark Nicholls was enough to seal the win the Rabbitohs. 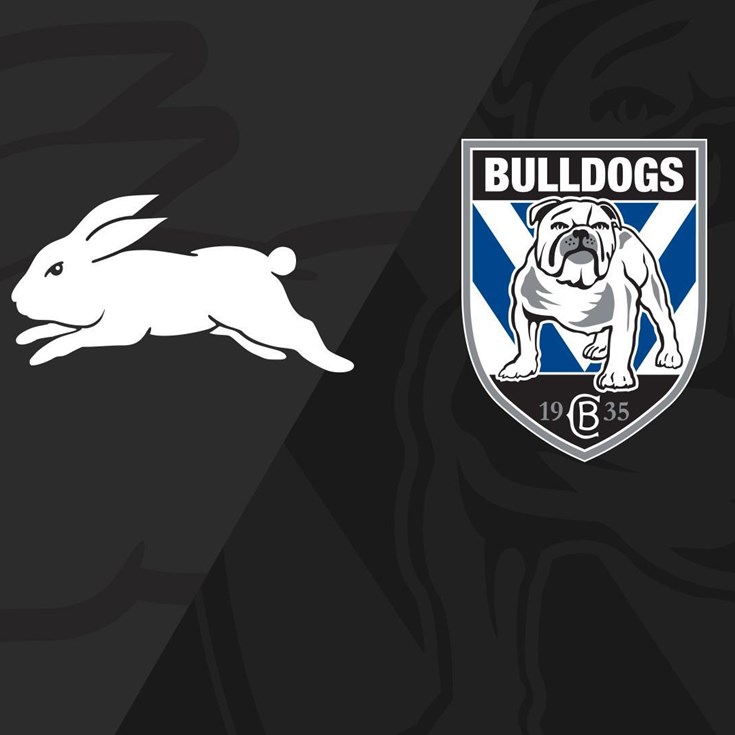