The Canterbury-Bankstown Bulldogs will be searching for their second win of the season when they face the St. George Illawarra Dragons in the annual Queen’s Birthday clash on Monday at ANZ Stadium.

With both teams struggling for consistency in 2021, the match looms as a crucial game for both sides as they aim to build momentum for the second half of the season.

The Bulldogs enter the clash fresh off the bye in Round 13, while the Dragons will be brimming with confidence after Matthew Dufty led his side to an impressive 52-24 victory over the Broncos last week.

The Dragons are placed precariously in eighth position on the table, with the six sides below them sitting just one win away from the top eight.

Meanwhile, a win for the Bulldogs could lift them off the bottom of the ladder and would be pivotal in the race to avoid the dreaded wooden spoon.

Jeremy Marshall-King has been welcomed back from injury and will immediately resume his position as starting hooker with Sione Katoa returning from suspension via the interchange bench. Corey Allen and Lachlan Lewis remain out of the squad due to injury.

The Dragons appear set to field an unchanged line-up from their last start win against the Broncos, although Tariq Sims could force his way back into the line-up if he recovers well from State of Origin.

The Bulldogs have a strong record against St George-Illawarra, winning 25 of the sides’ 42 encounters since 1998.

Prior to the NRL-era, the Bulldogs won 52 of their 131 games against the Dragons and 22 of their 27 matches against the Steelers, with premiership victories coming against St. George in the 1942 and 1985 Grand Finals.

In recent times, the Dragons have won four of their last five matches against Canterbury, including a 32-12 victory at Kogarah just five weeks ago.

The Bulldogs have won four of the six Queen’s Birthday clashes, including the first three before the Dragons claimed victory in 2018 and 2019.

The Bulldogs prevailed in last year’s fixture behind closed doors at Bankwest Stadium as the Canterbury defence held the Dragons try-less, while Nick Meaney scored fourteen of his side’s 22 points.

Arguably the most memorable recent clash between the two sides came in the first week of the 2015 Finals Series, when the fifth placed Bulldogs triumphed by one point over the eighth placed Dragons.

An early try to fullback Brett Morris gave the Bulldogs a 6-0 halftime lead in a low-scoring encounter, which was witnessed by a crowd of over 33,000 at ANZ Stadium.

The Dragons levelled the scores with ten minutes remaining through Fijian flyer Eto Nabuli, before Gareth Widdop put his side in the box seat with a penalty goal.

Facing elimination, the Bulldogs rallied in the following set and rolled down the field. Josh Reynolds created space on the edge with a jinking run before linking up with Tim Lafai, who sent Shaun Lane away to score a famous try.

A controversial penalty saw Gareth Widdop send the game into Golden Point with a goal after the siren, but it was Canterbury’s night as Josh Reynolds calmly slotted a field goal to seal the result in a classic encounter.

While they may not receive the same attention as their flashier backline teammates, the battle between these two representative-calibre forwards will be fundamental in determining the result of the match.

Both forward packs have recently struggled to dominate the middle third of the field, with both sides sitting in the bottom four for average total running metres this season.

After missing the first four rounds through suspension, Luke Thompson has nabbed two tries this year and has recently joined the ever-aggressive Jack Hetherington to form a formidable starting pair for the Bulldogs.

The British prop is averaging the tenth most running metres of all forwards in the competition.

For the Dragons, former Blues enforcer Paul Vaughan lost his spot in the State of Origin side last year and will undoubtedly be looking for an impressive performance that sends a signal to Brad Fittler.

Statistically, Vaughan has produced a similar output to Thompson in 2021, and his combination with the recently-returned Jack De Belin will be critical if the Dragons are to win the field position battle on Monday.

While the Bulldogs are yet to reach their attacking potential in 2021, the side’s ability to maintain possession and execute a simple game-plan could trouble the Dragons.

Against the Panthers, Canterbury committed only one error in the first 30 minutes of play and kicked deep into the corners of the field to keep the competition leaders to just ten points at halftime.

Up against the side with the second-highest completion rate in the league and the fewest number of mistakes, Anthony Griffin will undoubtedly be hoping his side can hold the ball and starve the Bulldogs of possession.

Should they do so, the Dragons’ attacking unit powered by Dufty, Hunt and Norman may possess too many points for the Bulldogs to match.

However, if the Bulldogs can force mistakes from a Dragons side that ranks in the top four for errors per game, Trent Barrett’s men can turn the match into a grinding, low-scoring affair that mirrors the Bulldogs’ first win of the year against Cronulla. 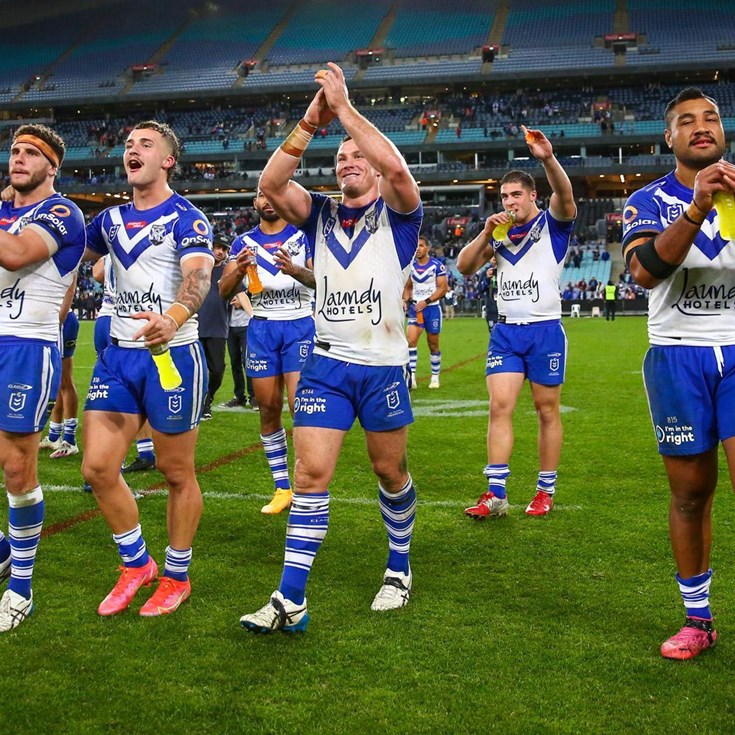