The Bulldogs are excited to launch our 2021 Indigenous Jersey, designed by Bulldogs reserve grade player and artist, Cleveland McGhie.

The artwork on the Bulldogs Indigenous Jersey incorporates three stages of everyday; the past, the present and the future. The two hands on the front of the jersey both ‘reflect’ history: history of an Aboriginal Canterbury-Bankstown Bulldogs player and the history of the Dharug Country, the traditional Aboriginal Country in which the Club and Belmore Sports Ground are based.

The left hand on the front of the jersey profiles the Tree Goanna, which is the totem of Rod “Rocket” Silva, a Kamilaroi man from Moree, who played 100 games for the Bulldogs between 1995 and 2001. “Rocket” moved from the Eastern Suburbs to the Bulldogs in 1995 and went on to score the final try in the 1995 Premiership win for the Bulldogs against the Manly-Warringah Sea Eagles. “Rocket” has been a great contributor to many communities over the years through football, culture and his work as a Police Officer in his local area.

The right hand represents the Dharug people of the Canterbury-Bankstown areas, the Aboriginal people who cared for, respected and maintained the rich land and waterways of the area, they were, are and always will be traditional landowners. The smaller handprint inside represents an Aboriginal place of significance in the Canterbury-Bankstown area, this place is the rock shelter located along the Cooks River. The Cook’s River and it’s significance to Dharug Country is also symbolised inside the hand.

The eight circles (seven rings and one full circle) connecting the hands reflect the eight premierships the Club has achieved (1938, 1942, 1980, 1984, 1985, 1988, 1995, 2004). The symbol of the man in the centre of the circle is Tedbury, the son of noted warrior and resistance fighter Pemulwuy. Tedbury was gifted to the Club by Chifley College in Mt Druitt who designed the Club’s first Indigenous jersey. He is now a strong representative symbol for the Club.

The four quadrants filled with dots around the Premiership circles are a reflection of the Club’s past, present and future, with each quadrant representing a different group of people who have, and continue to play a role with the Canterbury-Bankstown Bulldogs. They are the Players, the Staff, Sponsors and Supporters.

The hands on the back of the jersey represent current Bulldogs first grade players Adam Elliott and Chris Smith. This ties together the Bulldogs past (Rod Silva), present (Adam and Chris) and future (Area) through the 4 hands. Tedbury once again features on the back between the two hands connecting the players and their totems to the Club.

Adam’s totem is the Lyrebird, which was gifted to Adam by his father early on in his life, during a time where they travelled around for Adam’s blossoming football career, during which time they often encountered the Lyrebird. The Lyrebird always reminded Adam’s father of his son, due to his talkative and highly energetic nature. In Dreaming, the Lyrebird is known as the peacemaker in the first great dispute between all the creatures. As a reward, the Spirits gave Lyrebird the ability to be the only animal able to communicate to all the other animals. If the Lyrebird appears in your life, see his qualities of imitation as your own.  He signals a time of learning from others in some way, generally a hands-on, rather than intellectual, learning.

Chris’ totem is from the Arrernte people of the Northern Territory. His totem represents the Lightning. Lightning is a powerful force, it helps us by warning of the incoming desert storms, bringing with it the rain and fresh water, creating and sustaining life for all.

The artwork as a whole reflects the Aboriginal history of the Dharug Country in which the Club is based. It ‘Reflects’ on the history of the Club and shows respect to the Club’s past and present Indigenous Players. The artwork pays ‘Respect’ to the Indigenous people who paved the way for today’s generation of Indigenous leaders, people and communities. It also incorporates and respects the Premierships, the Players, the Staff, the Sponsors and the Supporters who have all been essential in helping the Club thrive. The artwork represents both the Indigenous community and the Canterbury-Bankstown Bulldogs. It represents the ‘Reckoning’ to come, the future of the Club and it’s local community.

The artist is Cleveland McGhie, a player in the Bulldogs reserve grade system and a proud Wiradjuri, Ngunnawal/Ngambri man, who also acknowledges the contribution the Dharawal community, Elders and leaders provided to him in his upbringing. 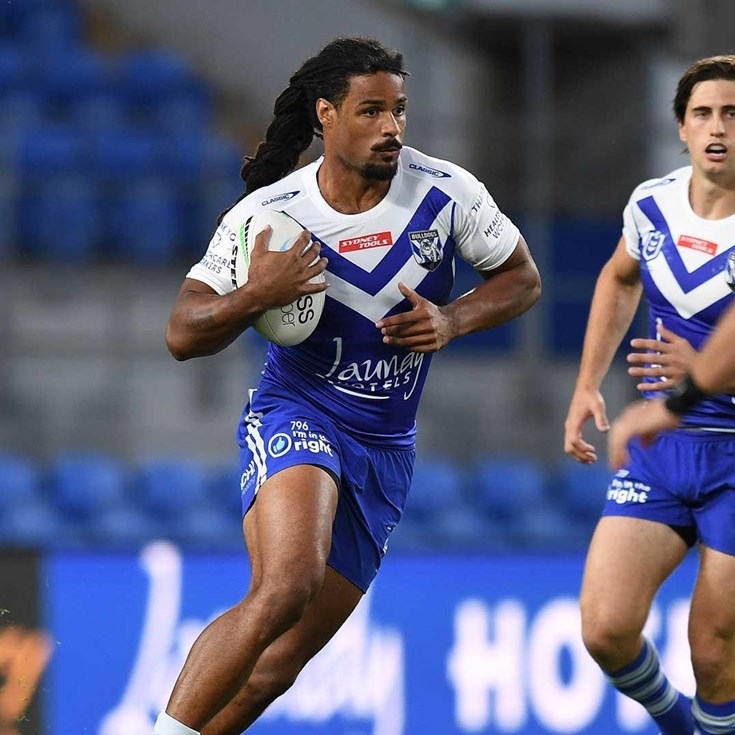