A collection of the game's most exciting players will get men's footy started for 2021 when the Indigenous and Maori teams meet for the Harvey Norman All Stars.

Cody Walker, Latrell Mitchell, Benji Marshall, Jack Wighton and Jarome Luai are only a handful of the big names who will proudly represent their cultures at Queensland Country Bank Stadium in Townsville on February 20.

Walker has been named as captain of the Indigenous All Stars team while Dallin Watene-Zelezniak and Joe Tapine will share the Maori leadership duties.

Wet weather has blanketed Townsville for most of the week and rain is predicted for game day.

Seven new players were added to the match on Sunday after Melbourne's representatives were omitted from the game due to COVID-19 border restrictions.

The Maori side, coached by David Kidwell, are reigning champions having beaten their counterparts 30-16 last year.

They possess a dangerous mix of power, skill and athleticism and will again be tough to overcome. But the blinding speed and ad-lib attacking instincts of Laurie Daley's Indigenous squad will give them hope of reclaiming the Arthur Beetson Trophy.

Adam Gee will referee the match, with Phil Henderson and Ziggy Przeklasa-Adamski the tough judges.

Indigenous All Stars: No changes on game day so the squad is as per program.

Storm flyer Josh Addo-Carr was ruled out of the match on Friday with Victoria's COVID-19 border closures. The Titans' Corey Thompson is the new face in the squad.

Sharks captain Wade Graham withdrew from the initial squad due to a perforated eardrum which meant he couldn't fly. The back-rower was replaced by Manly forward Zac Saddler, who played in last year's fixture. Tyrell Fuimaono has been promoted to start.

Dynamic five-eighth Cody Walker is back after a shoulder injury ruled him out of the 2020 clash.

Latrell Mitchell will play his first game since suffering a hamstring injury for South Sydney in late August. He has been named at fullback, but coach Laurie Daley will monitor his workload. Rabbitohs teammate Alex Johnston can also capably fill the custodian's role.

Maori All Stars: After a raft of forced replacements in the lead-up, including a late change early on game day, the final side was confirmed an hour from kick-off with no further disruption.

In the early game-day change, Raiders speedster Bailey Simonsson was ruled out with a minor leg injury and replaced by Cowboys young gun Wiremu Greig.

The side was hit hard by last Friday's border closures in Victoria with Jesse and Kenny Bromwich, Reimis and Brandon Smith, Jahrome Hughes and Nelson Asofa-Solomona all ruled out of the match.

The playmaking magician will come off the interchange with little brother Jeremy Marshall-King, while star Panthers five-eighth Jarome Luai will debut in the halves.

Titans leader Kevin Proctor withdrew from the team because of a hamstring injury, with Wests Tigers prop Zane Musgrove called up.

Raiders lynchpin Charnze Nicoll-Klokstad will represent the Maori team for the first time, taking the fullback jumper from Kalyn Ponga, who wasn't considered as he recovers from shoulder surgery.

Roosters centre Joey Manu will make his maiden All Stars appearance, having been unavailable for the past two years with his club featuring in the World Club Challenge in England. Patrick Herbert and Bailey Simonsson are other debutants.

Cody Walker v Jarome Luai. Both intuitive, skillful five-eighths who are tailor-made for fast-placed, eyes-up play. Walker, a proud Bundjalung-Yuin man, was in sizzling touch for South Sydney last season as he set up tries galore, while Panthers gun Luai had an outstanding year in which he kept growing in confidence.

Melbourne's Brandon Smith wants to become a full-time NRL hooker, and he gave a great account of himself in the Maori No.9 jersey last year. He suffered a facial fracture early in proceedings but played on to record 177 metres, 13 runs, four line-breaks, six tackle-breaks and two tries in a match-winning 59-minute performance.

Walking is the best way to access the stadium precinct. The precinct is a short walk from the CBD (approx.1.2km), walk via:

There is a free park and ride service operating from Lou Litster Park for this event. Services will run regularly between 4pm-7pm and will recommence from 9pm for return journeys.  Access to Lou Litster Park is via Brodie Street.

Please note there is NO public parking at the venue.

Reid Park: Make your visit to this event easy by pre-booking a parking space at Reid Park. The car park will open at 3pm and will close at 10pm. Access via Pit Lane on Saunders Street.

Click here for full information on getting to Queensland Country Bank Stadium.

How Queensland Country Bank Stadium is reducing risk of COVID-19

Ticket inclusion collection points below, only applicable to those that have purchased within those categories.

The Official All-Stars Pre-Game Party is brought to you by NRL Travel where you can meet and mingle with NRL Legends ahead of the game. The pre-game party provides you access to the Sky Deck North at Queensland Country Bank Stadium ahead of the game making it the perfect place to get excited with friends before the opening game for 2021.

Guests that have purchased the pre-game party inclusion can enter via Gate G from 2:00pm at Queensland Country Bank Stadium on Sat 20 Feb 2021.

Guest Names will be on a list for the pre-game party, these will be as per your Ticketmaster booking. Please bring your ID.

You will also require your game ticket to access the venue.

Witness the best of the best from both sides of the Tasman. As athletes and as people from the First Nations.

Be there as cultures collide.

Tickets are available at NRL Tickets. 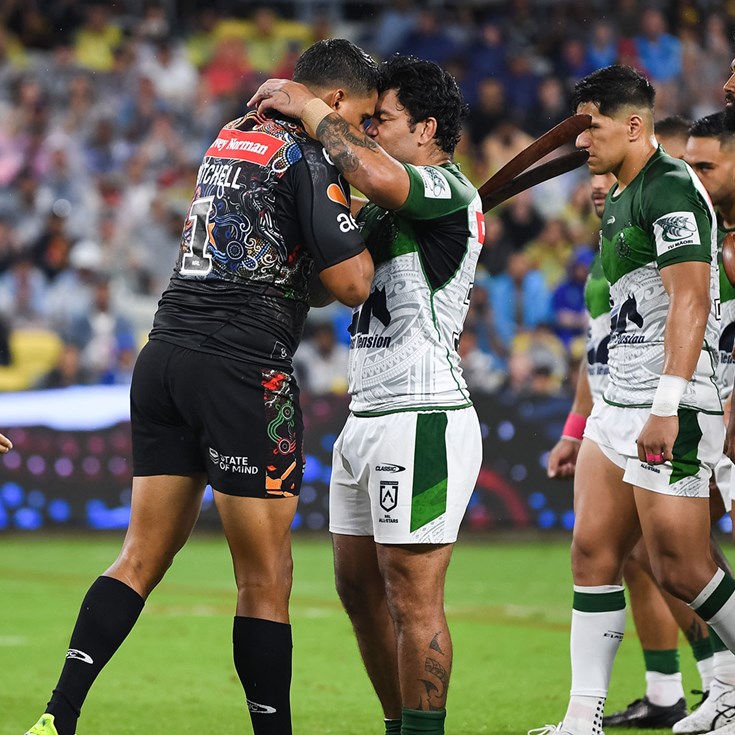 Manu intercepts a Fogarty pass and DWZ finishes the job