Steve Mortimer is permanently enshrined in NSW history as the man who captained the Blues to their first State of Origin series triumph against Queensland in 1985.

The Hall of Fame halfback's passion for NSW was encapsulated as he fell to the ground in joy after game two at the SCG that year.

The Bulldogs champion recently attended an event at ANZ Stadium to celebrate 40 years of Origin. He spoke with NRL.com about the concept's early days and some of his best memories in sky-blue.

Can you believe how big Origin has become, 40 years after its inception?

I always thought the rugby league would go well. But then State of Origin was absolutely brilliant. And yes, I was in the first decade of that. I played [interstate matches] before Origin - it started in '80, I came in '77 - and we would always beat Queensland then. And then in 1980, Queensland started turning it around and winning it all up until 1984 ... The last game in '84 we beat Queensland and the next year we beat Queensland up there 18-2 and 21-14 at the SCG.

The reason I'm saying that is because I looked at all the players I've got [in that team]. They were unbelievable. They were good blokes, no one was up themselves or whatever, it was just about being one of the team. I really do believe that a little bit of humility had a big effect on the team. Blocker Roach, [Noel] Cleal, Benny Elias, my brother Chris, Brett Kenny - an absolutely stunning player. So it was good that we kicked it off. Finally, NSW got a win.

When you were playing those interstate matches before Origin, was the passion the same?

The passion was the same. I played with Arthur Beetson, Kerry Boustead - there were about six Queenslanders in there [playing for NSW]. And basically, yeah, we won. That's great and all, whatever. But then, when 1980 [Origin] started, the administration could see this is going to be a great competition for everyone in Australia. Those that don't even know about rugby league and whatever. And all the Aussie Rules players, they love watching State of Origin.

I played up until '85, that's when we won, and I pulled out and [said] I'm not playing anymore representative football. I wasn't sorry to leave, I was just so happy to see Benny Elias, my brother Chris, Blocker, Clealy, Brett Kenny. All just great blokes and we did it. It'll always stand before me before I pass away that people go, 'Well, we had a great team in 1985'. That's what I'm very proud of.

What do you think when you see the image of yourself collapsed on the turf in joy after winning the series in '85? Does it still bring back really powerful memories?

[Laughs]. It does ... I grew up in Wagga and then came down to play for Canterbury in '76 and then went on and played for NSW in '77. Anyway, irrespective of that it was just great [to win the series]. To all of the Queenslanders, I think NSW have got the greatest footballers to represent NSW and Queensland.

I've got to also say I had the privilege to play with Arthur Beetson. I'll share one thing with you: they were about to get a scrum and then Arthur Beetson said, 'Alright boys, here's that little fella that's come down from Wagga. You want to give it to him now?' [Laughs]. I backed off and then I put [the ball] in quickly. And they're just holding the ball and I had to go and get the ball. He's the best forward I have played against and played with. I was very privileged. I'm talking like a little kid now. It was just so wonderful.

If you had to pick one, who was your favourite Blues teammate?

I'd probably have to say Brett Kenny.

Brett was a wonderful player. He scored the last try in the very first time that NSW beat Queensland in a series win. I just loved him. I hope he gets the chance to have see this. I just think the world of him, mate.

And also, there's Sterlo [Peter Sterling], the halfback. He was a great player. Absolutely respect him greatly. He came from Wagga a little bit and his father was in the RAAF. Sterlo and Brett Kenny were a great half-five-eighth [pairing for Parramatta, NSW and Australia].

And then all of a sudden Terry Lamb comes to the Bulldogs and there's Mortimer and Lamb. We had some good challenges, we really did. I'm just very grateful to have been a captain for the Blues and to have played for Canterbury and won a few premierships.

What was the competition like with so many great halfbacks in your era - Sterling, Tommy Raudonikis, etc?

I've got to tell you, when I first came down, Tommy Raudonikis just came trying to belt me all the time. But you know what, we get on very well. I love him. He played for the Kangaroos back in Wagga. I think that's who Sterlo played for too.

Tommy was a different type of halfback to what Sterlo was. Sterlo was very clever and all that sort of stuff. Tommy would just take the ball up and kick the ball and whatever. He thought rugby league was just belting blokes and scoring tries and winning. I get on very well with him, he's a great bloke and I can't say much more than that. 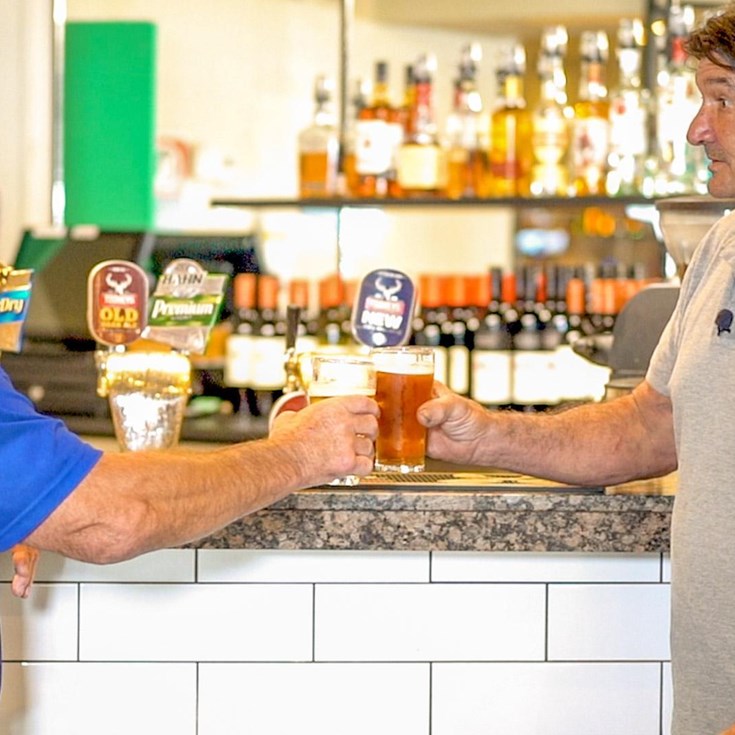