After going to a "dark place" earlier this year, Lachlan Lewis is optimistic again and credits interim Bulldogs coach Steve Georgallis with unlocking his attack.

Lacking self-belief, the halfback struggled when Dean Pay dropped him for Brandon Wakeham in round six. With no reserve grade competition to fall back on, his "outlet" was taken away.

"I was lucky enough to have a few people around me give me some good advice to turn up each day to try and become better and an opportunity would come - and it did," Lewis told NRL.com.

The 23-year-old has show improvement since being reinstated in the No.7 jersey by Georgallis three weeks ago, producing try assists in the past two games amid a growing partnership with Kieran Foran.

Lewis believes a period in the second half of Sunday's 18-16 loss to heavyweights Parramatta, in which he and Foran combined nicely to set up a left-edge try, was "probably the best we've attacked".

He said working closely with Georgallis, who played most of his 206 premiership matches in the halves, has helped his development.

"Georgie's opened up our attack a bit. We can just look up, we get to play some footy and play what we see," Lewis said.

"He has a structure for us but you never get into trouble for playing footy and it not coming off if there's a chance there.

"Me being young, [I enjoy] that little bit of freedom that I can do a few things without the big pressure of if it doesn't work. But that's one game, let's see if we can do it against the Storm [this Saturday].

"Playing with Foz and us linking when we both came down the left side there and floating ... that's something we can take forward."

Lewis said his relationship with Pay, who was his first NRL coach, "wasn't too bad" but the lack of results began to hurt.

"We weren't doing well and pressure mounts. We're a whole bunch of young players and he was a first-time first-grade coach and we just took it really hard," Lewis said.

Incoming head coach Trent Barrett, who has already reached out to Lewis, will bring a wealth of experience having represented NSW and Australia as a playmaker.

"He gave me a phone call last week just to say, 'Enjoy your footy mate. There's a few things we can work on when I come there'," Lewis said.

"But apart from that it's just let's have a good old crack for this season. I've never had Trent as a coach myself but I've heard some really good things.

Every try from round 12

Speaking after the Eels match, Georgallis described Lewis as a "young half learning the game".

"The last three weeks I've been really working hard with him with his end-set options. He's still coming up with the wrong ones; he's learning though," Georgallis said. 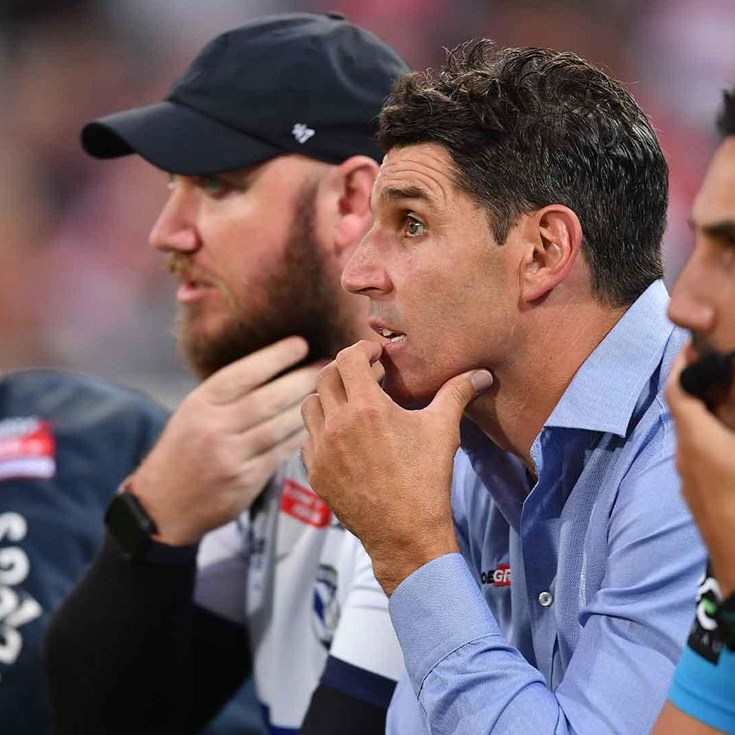