Canterbury's traditional late-season giant-killing run has claimed its first scalp, with the Knights knocked off and knocked back into a mid-table scramble for finals spots in a wet-and-wild thriller in Newcastle.

The grit and guts offered most every weekend by the Bulldogs received overdue reward on Sunday, with the visitors first marching to an 18-0 lead, then grimly defending it to head back down the F1 deserved 18-12 victors.

The upset loss cost the Knights far more than what was on paper a nigh-forgone two competition points.

Season-ending injuries to first Andrew McCullough (hamstring) and then Connor Watson (achilles) could yet bring head of football Danny Buderus into contention for a run in his old No.9 jersey.

Kurt Mann proved Newcastle's best when he took up the dummy-half duties, while one-game NRL rookie Chris Randell looms as another option for the hooking role in next week's clash with Telstra Premiership heavyweights Melbourne.

Instead of challenging for a top-four spot Newcastle could find themselves sliding to the edge of the eight pending results next weekend.

The Bulldogs meanwhile have made a frustrating habit of lifting late in a season when all hope of the finals is lost.

With roster spots under incoming coach Trent Barrett up for grabs pressure remains at Canterbury, and it brought out their dogged best in miserable conditions.

Off-contract prop Aiden Tolman made the first statement with his first try since 2017, capitalising on a glut of early possession created by five Newcastle errors in the opening 20 minutes.

Kieran Foran put what should have been Canterbury's second four-pointer on a platter as well with a pinpoint grubber soon after, but Jake Averillo couldn't hang on to the cake of soap imitating a Steeden.

Newcastle were never out of the contest, but rarely looked like breaking it open with few chances at the Bulldogs line.

When they came, so did untimely errors, Titans-bound prop Herman Ese'ese responsible for two coach-killing clangers when inside Canterbury's 20-metre zone.

A barge over from Raymond Faitala-Mariner continued momentum immediately after the break.

Five minutes later Foran was at it again with another dink into Newcastle's in-goal and Averillo made up for his earlier spill, this time grounding the ball as Ese'ese scrambled in vain to prevent an 18-0 lead.

It was only at the hour-mark that Newcastle showed signs of life.

Kalyn Ponga started the rally by drifting left and the Bulldogs' sliding defence went with him, before slipping right off Tautau Moga and Hymel Hunt as the latter stepped his way over.

Young props Jacob Saifiti and Pasami Saulo threatened to do it all themselves with bullocking charges only to be stopped just short of the line.

Instead it was Mann with a short-side raid sending Sione Mata'utia barging through, Ponga doing likewise with a difficult conversion to draw within six.

Averillo scores from a mistake at the back

Their second win of the season, and interim coach Steve Georgallis's first as a head coach since late 2011, proved just reward.

Mata'utia added to Newcastle's crowded casualty ward when he hobbled off with a knee injury in the closing stages of the match. 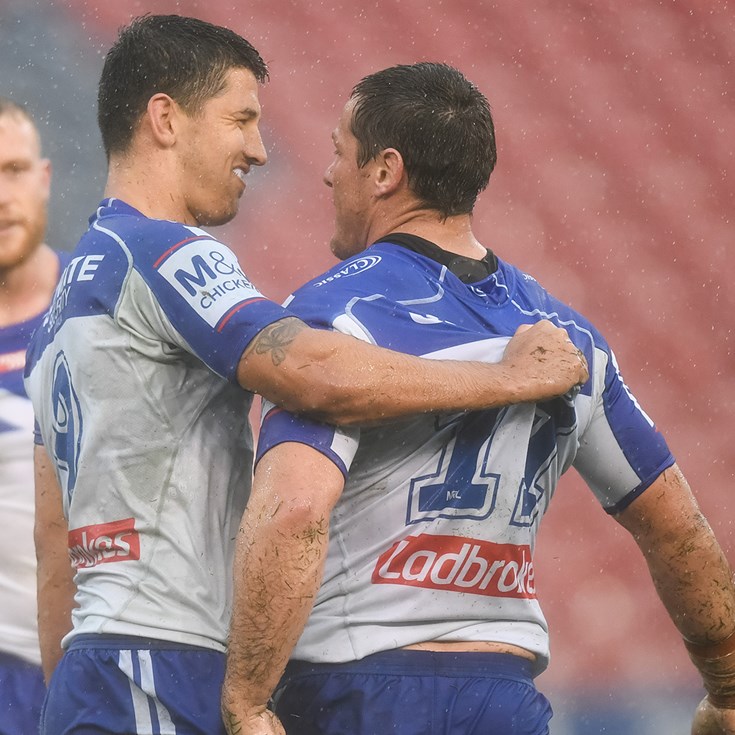 Press Conference: Round 11 vs Knights

Match Highlights: Round 11 vs Knights

Averillo scores from a mistake at the back