A 79th-minute Corey Norman try completed a remarkable St George Illawarra comeback to deny interim Canterbury coach Steve Georgallis a win in his first game since taking over from Dean Pay this week.

The Dragons scored in the first and last minutes of the WIN Stadium clash to snatch a 28-22 win over the Bulldogs, whose star playmaker Kieran Foran watched from the sideline for the final 42 minutes.

Foran was forced from the field just before half-time following a high tackle by St George Illawarra second-rower Tariq Sims but despite passing his HIA never returned to the field.

He had earlier come to the sideline with a toe injury and was off for a set of possession, but the 30-year-old didn't return in the second half and said post-game he feared he'd suffered the same injury that ended his 2018 season.

Dragons centre Euan Aitken was also placed on report for a crusher tackle on Canterbury captain Josh Jackson but the impending judiciary charges were the only major concern for St George Illawarra coach Paul McGregor.

"You take the win and those two points are priceless,'' McGregor said. "The pleasing thing is when we needed points, we found 18 points in 15 minutes.''

In contrast, Georgallis had barely taken his seat in the coach's box for his first game in charge of the Bulldogs when St George Illawarra fullback Matt Dufty scored the quickest try of the season so far.

"I was coaching the Greek team last year and Serbia scored in 12 seconds so I am used to it - and we went on to win the game," Georgallis said afterwards.

The 58-second try came at the end of the opening set of tackles after Zac Lomax flew above Canterbury fullback Nick Meaney to catch a Corey Norman bomb and passed to a runaway Dufty as his feet landed back on the ground.

Re-live the final minutes of Dragons-Bulldogs

The Dragons continued their impressive start to the match when halfback Adam Clune and Dufty combined to put centre Euan Aitken over for the second try by the home team in just the eighth minute.

However, momentum swung towards Canterbury after Sims dropped a Clune pass near the tryline and the visitors worked their way down the opposite end of the field, where Jason Marshall-King dived over from dummy half for a 20th-minute try.

“That first 15 minutes we were 10-nil down, I’m pretty sure everyone out there said ‘here we go again’ but the resilience they showed to lead, I just can’t thank them enough," Georgallis said of his team.

“We played for 77 minutes today and for three minutes we took the wrong options and came up with errors ... it can be a cruel game and we were punished for it.

The Bulldogs maintained the pressure through penalties, a six-again call and St George Illawarra errors before Meaney scored from a scrum win 10 metres from the Dragons' try-line.

Meaney's conversion put the Bulldogs ahead for the first time in the game and they continued to grow in confidence after driving Dufty into the in-goal from a kick fielded by the lightweight fullback inside the field of play.

Canterbury second-rower Raymond Faitala-Mariner extended his side's lead when he forced his way across the try-line in the 34th minute and Meaney's conversion and a penalty goal after Sims' tackle on Foran gave the Bulldogs a 20-10 half-time lead.

Faitala-Mariner makes it three on the trot for the Bulldogs

Rookie Dragons winger Jason Saab bombed a try early in the second half after winning the race for a Ben Hunt grubber only to knock on in-goal and a 55th-minute Meaney penalty goal gave Canterbury a 12-point buffer.

However, Saab made amends when he gathered in a long Clune kick that was knocked on by Meaney and strolled over to score in the 65th minute.

Saab cleans up a Bulldogs mistake to score

Clune then created the try that drew the scores level at 22-22 six minutes from full-time after breaking into the clear 30 metres from his own line before sending Dufty racing away for his second try of the match.

Norman missed a field goal attempt but just as the game appeared destined for extra time, Dragons captain Cameron McInnes charged down an attempted clearing kick by Canterbury halfback Lachlan Lewis that hit his head to keep play in the Bulldogs half.

“That is sometimes the reward you get when you play like him," McGregor said. "I know it is not the feeling he likes to have when you get hit in the head with the ball but if you look at the pressure parts of the game he is involved in most of them.

“For the ball to hit anyone and come that hard it’s because he is going that hard at the opposition so the team got a reward for his effort tonight."

The game then turned on an error by Canterbury centre Marcello Montoya, who was unable to take a long pass from Lewis and Norman picked it up before racing 30 metres to the tryline for the match winner. 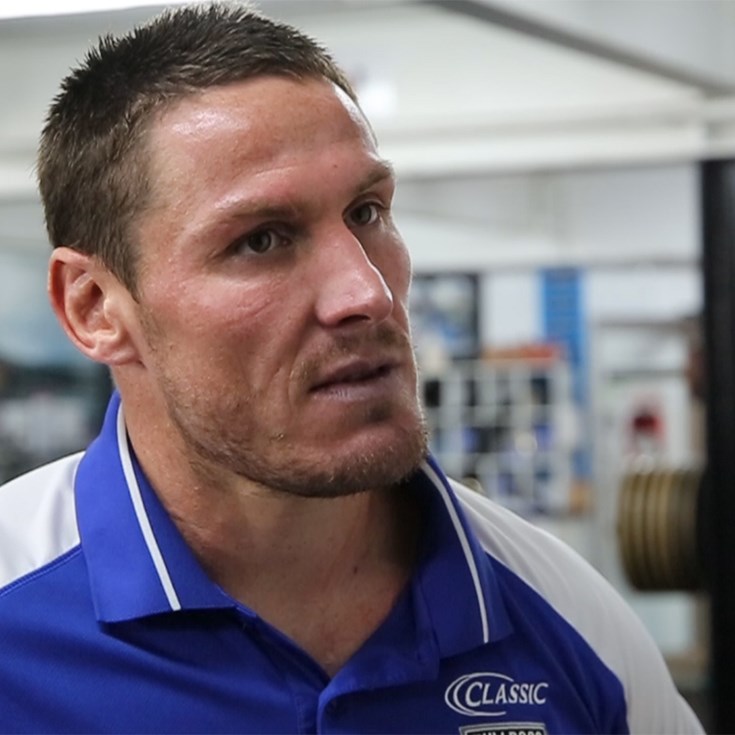 Jackson: We showed a lot of spirit and courage

Press Conference: Round 10 vs Dragons

Match Highlights: Round 10 vs Dragons

Meaney scores from the scrum as the Bulldogs take the lead