The Canterbury-Bankstown Bulldogs have been defeated by the Manly Sea Eagles, 32-6.

After more than 60 days on the sideline, the Bulldogs headed to Central Coast Stadium to tackle the Manly Sea Eagles in the final game of round three.

Dean Pay made one change to his side with Aiden Tolman coming into the 17, replacing Ofahiki Ogden. Tolman was pushed into the starting side with Sue shifting back to the bench.

Manly opened the scoring in the third minute through Tom Trbojevic after the fullback supported a Moses Suli line break to give the home side an early 4-0 lead.

The Bulldogs were down to 16 men when Adam Elliott left the field in the 12th minute following a HIA injury.

Trbojevic had his second of the night ten minutes later when he collected a short ball from his brother Jake close to the try line to score and extended Manly’s lead to eight.

A third try for Manly came in the 35th minute through Brad Parker when fullback Trbojevic delivered the final pass for the centre to score out wide. Reuben Garrick converted the try and the Sea Eagles led 14-0.

With less than five minutes in the half, Canterbury continued to look for their first try of the night, but the score remained 14-0 at the break.

Manly extended their lead when they added a fourth try through winger Jorge Taufua who collected a long ball from the Sea Eagles number one to score in the corner.

Tries to Curtis Sironen and a second to Parker in the space of three minutes as well as a conversion to Garrick in the middle of the second half gave Manly a 28-0 lead.

Canterbury lost another player to a HIA injury when centre Reimis Smith left the field with under 15 minutes to go.

The Dogs grabbed their first four pointer of the night and Jake Averillo scored his first try of his career when he collected a chip kick from Lachlan Lewis and run 30 metres to score under the post.

Manly hit back four minutes later when Garrick scooted from dummy half and crashed over the Bulldogs line to give the Sea Eagles a 32-6 and the win. 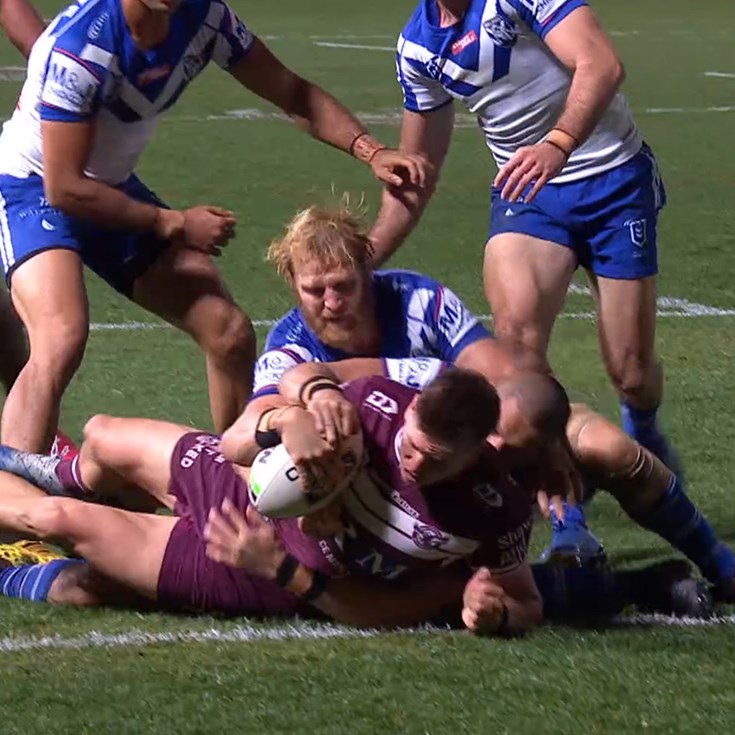 Press Conference: Round 3 vs Sea Eagles