The Canterbury-Bankstown Bulldogs restart their 2020 campaign this weekend against the Manly Sea Eagles in Gosford.

The Bulldogs and Sea Eagles have played on 129 occasions since 1947 with Canterbury claiming 58 victories, Manly 65 and there have been six draws.

Club legend Hazem El Masri holds the record for most points in a game with 22, while the biggest win came in 2003 when the Dogs defeated the Northern Beaches side, 56-24 at Brookvale Oval.

Over the years, there have been some fierce battles and memorable games between the two sides with none better than the 1995 Premiership win.

With the two sides set to close out round three this weekend, bulldogs.com.au takes a look at five memorable games between the two sides.

The 1947 season saw Manly enter the competition and the meeting in round 18 was the second time the two sides met that year.

The Sea Eagles grabbed a 24-23 victory earlier in the year, before Canterbury claimed their first ever win over the new team with a 30-17 win.

The Berries did not have things all their own way early, but came with a great finishing run to beat the home side at Brookvale Oval.

The game was packed with thrills and many spills with Canterbury’s forwards dominating the game as they used their weight to advantage in rucks and scrums.

The first half lacked any free-flowing rugby league, although the visitors collected three excellent tries to lead 13-7 at half-time.

Manly faded in the latter stages of the match which allowed Canterbury to score several attractive tries to claim a 13-point win and become minor premiers.

The Canterbury-Bankstown Bulldogs claimed their seventh premiership after downing the Manly Sea Eagles 17-4 in the 1995 decider.

Having finished in sixth place at the end of the regular season, the Bulldogs managed a history-making finals surge, winning three sudden death matches to make the Grand Final.

The Sea Eagles went into the game as hot favourites, having finished the regular season with a 22-3 win/loss record.

Canterbury were ahead at half-time 6-4 and withstood the pressure from Manly through their magnificent defence, even when Lamb was sent to the sin bin for a professional foul, the Dogs stood firm.

Showing enterprise and confidence, the Bulldogs ran in a further two tries through Rod Silva and Glen Hughes to register a remarkable premiership victory.

Canterbury shutdown Manly’s key men and held the Sea Eagles tryless for the first time in the season.

Jim Dymock claimed the Clive Churchill medal and at game's end, Lamb enjoyed the rare honour of celebrating as a retiring victorious skipper and was carried to the dressing-room on the shoulders of his teammates, although he surprisingly returned for the 1996 season.

The Bulldogs crushed the Sea Eagles 56 - 24 at Brookvale Oval as Hazem El Masri kicked his way into the record books as the Dogs piled on 10 tries against Manly.

All eyes were on El Masri who equalled Henry Paul's world record of 35 consecutive conversions with his kick after Matthew Utai's 38th-minute try.

It was their fifth of the match, with Manly only managing Luke Dorn's 23rd-minute try in response.

Canterbury were so dominant, they led 34-10 at half-time, but gave the Sea Eagles a sniff as the home side drew within 14 points after a pair of Steve Menzies tries.

Hazem missed the chance to be sole owner of the record when his conversion attempt to a Luke Patten try after the break faded to the left of the upright.

The Sea Eagles fightback was only momentary, with Vagana, Utai, Thurston and Mason all grabbing four-pointers for the Bulldogs.

Utai's try was his third of the match and he became the first player since Brett Mullins in 1994 to score three or more tries in three successive weeks as the Dogs scored more than 50 points for the third match in a row.

Bulldogs captain Terry Lamb always delivered in the blue and white and it was the same at Belmore Sports Ground on a sunny Sunday afternoon.

A crowd of 17,055 witnessed Lamb at his best as he tore Manly apart scoring three tries in the Bulldogs 21-12 win.

Manly’s hopes of an upset took a battering after only 90 seconds when Dean Pay charged down a Matthew Ridge kick and Lamb pounced for a try.

He grabbed his second 14 minutes later to steer his side to an early 12-0 lead.

Canterbury led 14-6 at the break, before the lovable Lamb grabbed his third and his 100th try in Bulldogs colours in the 58th minute to put the result out of reach for the visitors.

Lamb was outstanding! He scored all of Canterbury’s tries and kicked and tackled his heart out in another magnificent display in the Bulldogs jersey.

Round 14, 2013: Bulldogs get home in golden-point thriller

The Bulldogs got home in a golden point thriller, 32-30 over the Sea-Eagles at Brookvale Oval in front of 12,157 fans.

It was five tries apiece with Trent Hodkinson converting a penalty in the fourth minute of golden point extra-time.

Josh Morris opened the scoring in the second minute of play for the Bulldogs, before Frank Pritchard, Josh Reynolds and two tries to Ben Barba looked to put the Bulldogs well in the clear.

The final 15 minutes of the match saw the Sea Eagles run in three unanswered tries, two to Daly Cherry Evans and a dramatic 79th-minute effort from Steve Matai to level the scores at 30-30 and send the game to extra time.

It took just four minutes for the Bulldogs to secure the extra-time win when Hodkinson calmly stepped up to nail the two points and secure a two-point victory. 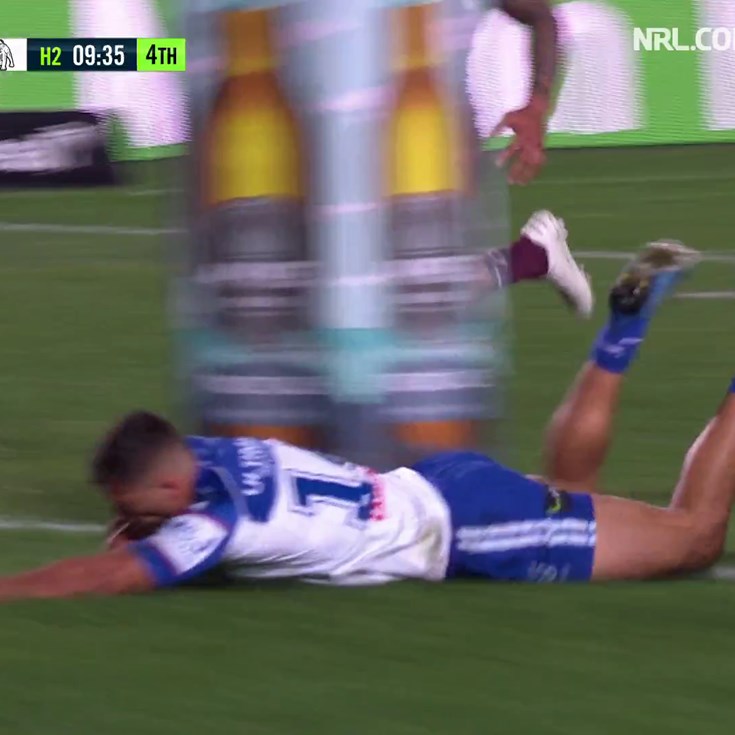 Hoppa to wait and see on six-again rule