Todd Greenberg has spent more than two decades working for the Canterbury Bulldogs, ANZ Stadium and the NRL.

Greenberg announced on Monday that he was stepping down from his role as NRL CEO.

Greenberg worked at the Canterbury Bulldogs as operations manager for three years.

Greenberg takes on a role as general manager of commercial operations at ANZ Stadium, working with Australia's major sporting codes including the NRL, AFL and football.

After six years at ANZ Stadium, Greenberg returns to the Bulldogs and is appointed CEO, replacing Malcolm Noad.

The side struggles on the paddock with five wins for the season to finish 16th. Greenberg tells then coach, the late Steve Folkes, his time was up coaching the side after 11 years at the club.

Greenberg is faced with a huge challenge early in his tenure with star Bulldogs forward Sonny Bill Williams hopping on a plane mid-contract to France and walking out on the club.

The Bulldogs boss explores legal options with no get-out clause negotiated as part of Williams's contract.

"I've just got off the phone to Sonny's manager Khoder Nasser and he has confirmed to me that Sonny has left the country," Greenberg told ABC Radio at the time.

"Quite simply, if Sonny intends to play overseas, we'll be looking to take out an injunction which will effectively stop him playing in France, England or anywhere else he intends to do it."

Williams is essential banned from the NRL until the 2013 season with a $750,000 compensation payout delivered to the Bulldogs from Williams's management.

Greenberg announces the coaching appointment of Des Hasler for the 2013 season, just six days after Hasler guided the Sea Eagles to premiership success.

Hasler was later released by the Northern Beaches club early where the Bulldogs had Jim Dymock on their books as caretaker coach after Kevin Moore was sacked during the season.

The Bulldogs reach the NRL grand final under Hasler.

Greenberg announces he is leaving Canterbury - he was replaced by Raelene Castle as CEO - to take up a role in July as the NRL's head of football, working with former NRL CEO Dave Smith on the code's elite competitions in a brief that included a strategic focus on the "whole of the game" rugby league operations.

Greenberg plays a huge part in the rubbing out of the shoulder charge tackle after concerns around concussion and illegal play grew louder with players suffering injuries.

He implemented a heavy penalty strategy that remains in place.

"We need to be clear about this... we cannot allow player welfare to be put at risk by shoulder charges," he said in a statement at the time.

"A player carrying the ball cannot protect himself properly against the force of a shoulder charge.

"We have seen this type of tackle have tragic consequences recently and the NRL has an obligation to put player safety first."

Greenberg replaces David Smith as the NRL's chief executive officer, who resigned from the position following the 2015 season.

The NRL and RLPA announce an historic collective bargaining agreement that will deliver the best deal to players in the game’s history with Greenberg a big part of discussions.

Greenberg said at the time the $980 million agreement signalled the start of a genuine partnership between the game and the players.

Greenberg meets with the ARL Commission to discuss his future with his contract due to expire in October.

The NRL season is suspended indefinitely, mounting pressure on clubs and stakeholders to survive in the short and long-term.

Greenberg resigns as NRL CEO after four years at the helm. 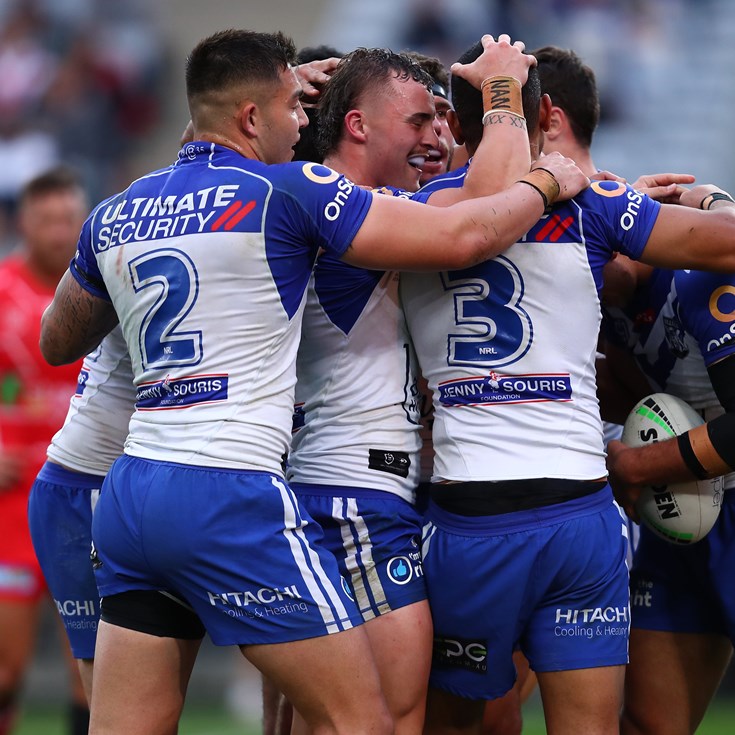 Averillo mesmerises the Dragons for his double

Averillo does it all himself for the Bulldogs