The Bulldogs have continued their giant killing late-season run by knocking off the finals-bound Brisbane Broncos 30-14 at ANZ Stadium on Saturday night.

The Bulldogs charged home to win five of their last six matches, upsetting the apple cart of the Panthers, Wests Tigers, Rabbitohs, Eels and Broncos to give their fans plenty of cause for optimism for 2020.

Brisbane came into the clash on 25 competition points and will finish eighth unless the Wests Tigers and Cronulla Sharks play out an unlikely draw on Sunday to both leapfrog the Broncos.

Bulldogs winger Nick Meaney ran in a treble for the home side with Jamayne Isaako caught out in defence on multiple occasions in a concern for Anthony Seibold going into next week's sudden-death final against Parramatta.

Meaney’s 22-point haul was the highest from a Bulldogs player against the Broncos in club history.

Brisbane were impatient and simply out-enthused against a Bulldogs outfit who will take momentum and belief into their summer training after recovering from a disastrous 3-11 position after 14 rounds to win seven of their last 10.

The Broncos' big men failed to fire a shot despite another heroic effort from Payne Haas (226 metres and six tackle busts).

Fellow big man Matt Lodge had an opening half to forget with two errors in an unflattering 27-minute stint as the Bulldogs raced to a 12-0 lead.

Canterbury halfback Lachlan Lewis delivered an unusual yet successful cut-out pass for Meaney's first of the night, before skipper Josh Jackson, who declared his intentions to remain at the club earlier in the week, finished off a Lewis kick.

Two tries before the half-time break through Kotoni Staggs saw Brisbane pull it back to 12-10.

Staggs' second effort in particular was the highlight of the night with the 20-year-old outleaping Tongan team-mate Will Hopoate to score on the half-time siren.

Canterbury delivered a double blow in the second half to push their advantage out to 14 with Lewis finding Meaney for his second with a pinpoint cross field kick.

Meaney's third on the Bulldogs left edge provided enough of a buffer despite a try to Anthony Milford with 16 minutes remaining.

Reimis Smith iced the win with his 12th try of the season with Hopoate again the man to deliver the final pass.

Staggs leaps above Hopoate for a first half double 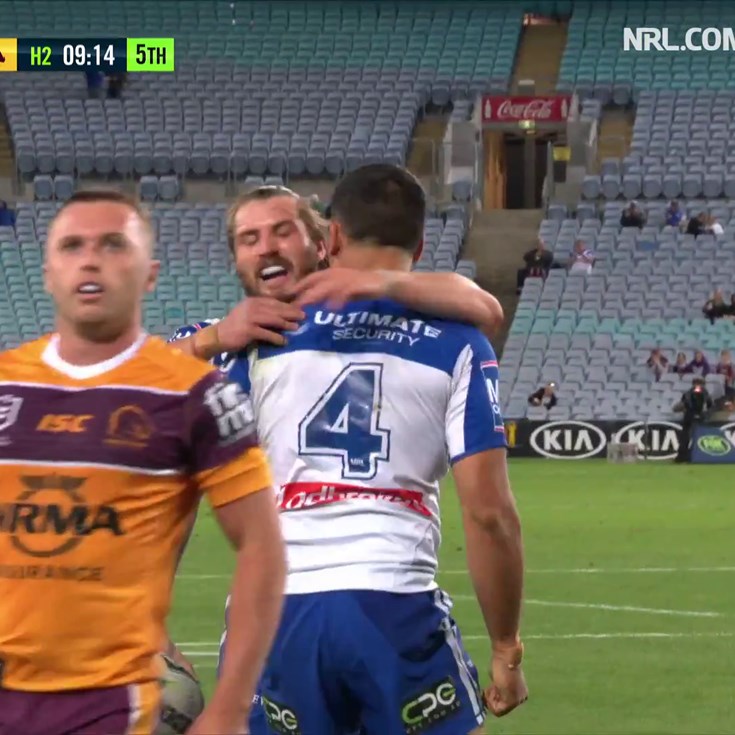