The Cowboys sealed a win over the Bulldogs and farewelled 1300Smiles Stadium in style with a late try in the 79th minute, running out 15-8 winners in front of 15,141 in Townsville on Friday night.

The evening was full of emotion as the home side farewelled retiring prop Matt Scott and second-rower Scott Bolton who’ll leave the club at the end of the 2019 season.

In the opening 20 minutes both sides played a tight and gritty game but as the half went on the errors were mounting and they went into the break 2-all.

Jordan Kahu opened the Cowboys' account five minutes into the first half after Kieran Foran was penalised for impeding Gavin Cooper when Michael Morgan put up a high ball.

The Bulldogs’ Nick Meaney levelled the score four minutes later with their own penalty after Jake Granville was found to be slow getting off a player.

Canterbury were disallowed a try in the 15th minute after Foran found space through the middle.

Dallin Watene-Zelezniak was judged by the Bunker to have bobbled the ball under pressure from Kyle Feldt as he fell over the line after scooping up Foran's kick.

The Cowboys were starting to march their way up the field after repeat sets, Morgan reaching out but falling agonisingly short of the line in the 22nd minute, handing the ball back to the Bulldogs.

Jeremy Marshall-King capitalised on the hand-over and kicked a 40/20. The Dogs were deep in Cowboys territory but were unable to turn it into points.

Kahu slots the field goal which gets Cowboys into the lead

The Bulldogs started the second half off with their second successful penalty shot of the game by Meaney after Peter Hola put pressure on the kicker.

Veteran winger Feldt finally posted the first try of the match in the 50th minute when he got on the outside of opposite number Meaney and crossed in the corner.

It didn't take the Bulldogs long to respond, the visitors loading up on the right-hand side five minutes later and sending it through the hands for Jayden Okunbor to stroll over in the corner for his second try against the Cowboys in 2019.

After repeat sets deep in enemy territory, and with four minutes to go, Jordan Kahu potted a field goal to put his team one point ahead. Nick Meaney then sent the kick-off on the full and to give the Cowboys ball straight back.

The Cowboys sealed a win in the final minute of the game, and ended Canterbury's improbable run at a finals berth, through a Shane Wright try after Morgan surged to within a metre of the line.

Bolton was given the honour of taking the kick for goal as he was playing his final game at home and nailed a beautiful attempt, the first goal of his 244-game career, to put the icing on the home team's seven-point win.

Scott Bolton converts for the final ever points at 1300SMILES Stadium 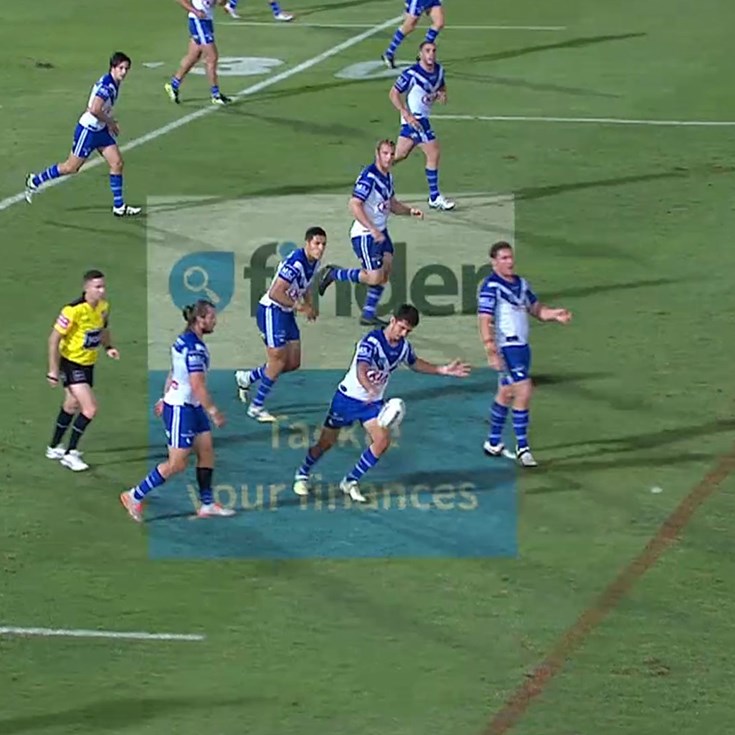