A brilliant defensive display from Canterbury, led by inspirational skipper Josh Jackson, has earned a thrilling 12-6 win over the Eels at Bankwest Stadium in a match that could have repercussions for both teams.

Nathan Brown (shoulder charge) and Reimis Smith (leading with the head) were each sin-binned early in the second half and face a nervous wait on the charge sheet from the match.

Dallin Watene-Zelezniak, the recipient of the shoulder charge that sparked a huge melee, also spent time off the field with a shoulder injury.

The loss, just the second all year at their new home ground, dents Parramatta's hopes of a top-four finish but a home final in three weeks still beckons.

In between the dramas there was some thrilling end-to-end football as the Eels' high-octane attack repeatedly came unstuck in the face of stern Bulldogs defence.

The Eels started brightly with plenty of ball movement and it was a brilliant pair of offloads from Nathan Brown and Manu Ma'u that set up Waqa Blake in the sixth minute, the mid-season recruit beating the last few defenders to plant the ball down.

The Eels showed a lack of patience in attack for the remainder of the first half as Ma'u coughed the ball up three times off passes from Mitch Moses.

The other real highlight for the home side in the opening 40 was a monstrous hit from winger Maika Sivo, the tackle-of-the-year contender forcing an error from Watene-Zelezniak that allowed the Eels to race downfield in the 15th minute.

The Dogs held firm and pressed the Eels' left edge of Dylan Brown, Shaun Lane and Michael Jennings when they did get in range.

Nick Meaney produced some superb takes under Moses attacking bombs and the visitors were twice unlucky on attack, fumbling kicks with the line begging.

Their pressure on the Eels' left edge finally paid dividends in the shadows of half-time as some beautiful lead-up work from Kieran Foran and Josh Jackson set up Will Hopoate to make it 6-all at the break.

Nathan Brown lit the fuse early in the second half with a shoulder charge on Watene-Zelezniak that sparked an all-in brawl.

Brown was sin-binned and placed on report while two Bulldogs were cautioned for retaliating.

Watene-Zelezniak appeared hampered thereafter and was soon after taken off with an apparent shoulder issue, but later returned and finished the game

The Dogs earned a six-again call while attacking shortly after the Brown sin-bin before a monumental brain explosion from winger Reimis Smith.

With a full set on offer against a reduced defensive line Smith head-butted Maika Sivo to land himself on report and in the sin-bin and hand possession back to the Eels in the process.

The Eels had a golden opportunity to take the lead on the hour mark but Maika Sivo failed to ground the ball properly with a one-handed put down.

The deadlock was eventually broken by a penalty try - a Kerrod Holland line break and kick ahead forced a repeat set before Holland backed it up to send Nick Meaney over for a try. Moses kicked the ball loose in the act of grounding resulting in a penalty try and an easy conversion for a 12-6 lead.

With the clock winding down the Eels earned a final push at the line, forcing a dropout and one last full set but despite countless passes and offloads they were unable to find a way through the blue-and-white wall.

The resurgent Bulldogs have now beaten the Panthers, Wests Tigers, Rabbitohs and Eels in successive weeks to breathe new life into a season that looked dead and buried when they slumped to 3-11 after 14 rounds. 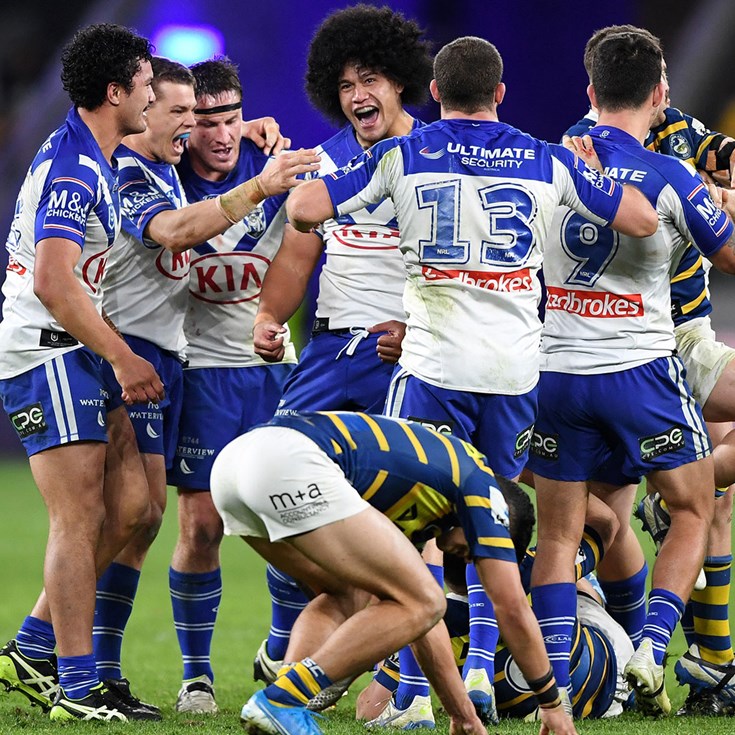