The Tigers stayed in the finals race with last week's convincing home win over the Cowboys but they can't afford to relax.

With so little room for error in the run to the play-offs the Tigers must maintain their intensity, especially against a team they'll be expected to beat.

The Bulldogs showed last week that they aren't about to roll for anyone over in the run to the finals when they put a big dent in Penrith's play-off plans.

Bulldogs: The Bulldogs are 1-17, with Jayden Okunbor and Ofahiki Ogden dropping off the reserves list. Raymond Faitala-Mariner gets his first game back in the NRL since round 14. Brandon Wakeham and Kayne Kalache were omitted 24 hours out from kick-off.The Bulldogs have won three of their past five games.

Wests Tigers: Thomas Mikaele replaces the injured Josh Aloiai (hand) at prop and Elijah Taylor joins the bench. Tommy Talau and Chris McQueen dropped off the extended bench on game day. Josh Reynolds and Jacob Liddle were omitted from the squad on Friday night. Wests Tigers require 14 points to reach 10,000 points since the club entered the premiership in 2000.

Veteran five-eighth Benji Marshall continues to prove age is no barrier with the Tigers now inside the top eight. His opposite number Jack Cogger is just 22 and has played 268 less NRL games but he showed plenty of composure in last week's upset of Penrith and he'll enjoy testing himself against the mercurial Marshall.

Avoiding the wooden spoon should provide sufficient motivation to play their final five games like there's no tomorrow. The Doggies need to out-muscle the Tigers up front and not be afraid to chance their arm early in the tackle count. Defensively they have to keep close tabs on crafty Tigers veteran Robbie Farah.

For the Tigers to win

After coming from behind to beat the Knights in round 19, the Tigers were all business from the opening whistle in last week's 28-4 defeat of the Cowboys. Maguire got valuable contributions all over the park and will be asking for the same effort on Saturday. If the Tigers turn up with the right attitude they should win comfortably.

This should be a close game. Canterbury can defend well and the arrival of Dallin Watene-Zelezniak has provided a real boost for their attack. They still aren’t scoring a lot of points but are at times grinding out wins. The Wests Tigers are also a grinding outfit. It will be a nice, big, arm wrestle, this one. The Tigers don’t have a big milestone to play for this week. Wests Tigers by 1

It doesn't reflect on the ladder but the Bulldogs lead the NRL in one department – set completion. Canterbury's 80 percent is level with the first-placed Melbourne Storm. Getting to a kick is one thing, but threatening the line is another as Dean Pay's men prove.

It was way back in round three when the Bulldogs notched their first win of the season - a 22-8 defeat of the Tigers. The Doggies have only won five games since then, while the Tigers have been hard to pick all season but they're still right in the finals hunt with a 9-10 record. The Tigers trailed 18-0 at half-time in that round three clash and it might be in the back of their minds come Saturday. 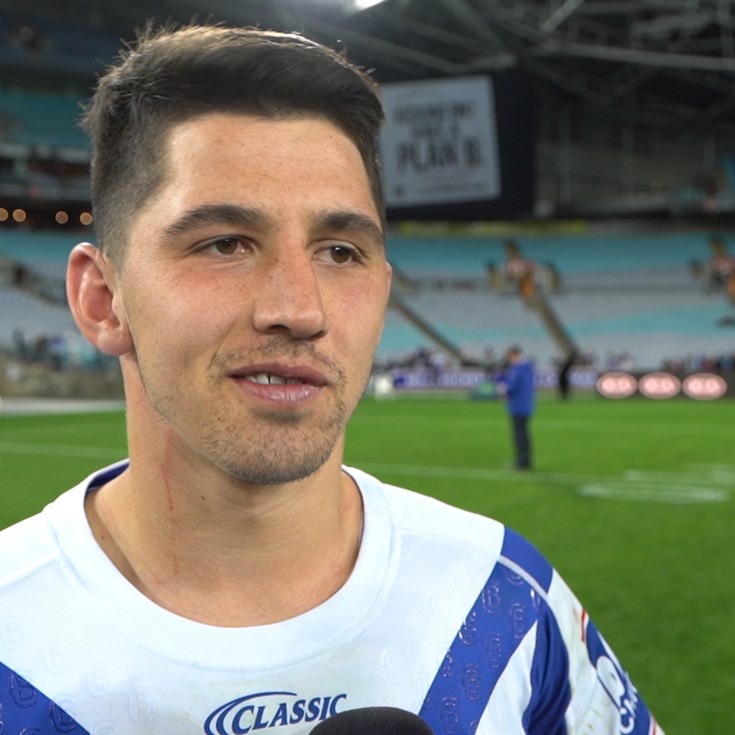 Marshall-King full of praise for team's fight back