It was this time last year that the Roosters started rumbling ominously toward the finals.

They're not playing quite as well in 2019, but the Chooks are still the NRL's scariest team not based in Victoria and boast some of the game's most lethal match-winners in Tedesco, Mitchell, Keary and Cronk.

They cruised to an easy 38-12 win when they met the Dogs in round 14 and shouldn't have much trouble repeating the dose on Sunday.

The Bulldogs won two in a row before being brought back to earth with last week's 28-6 road loss to Brisbane. Avoiding the wooden spoon has become the primary goal for Dean Pay's men.

Bulldogs: Lachlan Lewis returns from an ankle injury at halfback in place of rookie Brandon Wakeham, while Kerrod Holland comes in for Marcelo Montoya, who suffered a season-ending knee injury last weekend. Kieran Foran (hamstring) was in line for a return after being named as a reserve but was cut from the squad on Saturday. Raymond Faitala-Mariner was the other player cut 24 hours out from kick-off. With Aiden Tolman's return to the front row, forward Okahiki Ogden was cut an hour before the game along with outside back Jayden Okunbor.

Roosters: Victor Radley has been shifted back to his usual place at lock, allowing Canterbury Cup star Sam Verrills (No.14) to come off the bench and start at hooker for the injured Jake Friend. The No.13 named on Tuesday, Isaac Liu, moves to the interchange forwards. Brett Morris has been elevated from the bench to the starting side in place of Ryan Hall, while Sitili Tupouniua moves up to the bench. Joseph Manu is back in the centres after being rested last week. Zane Tetevano returns from suspension on the bench as well. Poasa Faamausili and Billy Smith were omitted an hour before kick-off.

Dylan Napa won't need any extra motivation when he takes on his former team. The Bulldogs prop spent six years with the Chooks before switching clubs this season and will be itching to lock horns with Roosters enforcer Jared Waerea-Hargreaves.

It's going to take a special effort but the Doggies have shown they are capable of occasionally stepping up to the plate and this might be one of those games when they're on song. Napa and his fellow forwards need to slow the Roosters up front, while inexperienced halves Brandon Wakeham and Jack Cogger have to play out of their skin.

For the Roosters to win

Maybe they're just in a slow-burn as they work their toward the play-offs, but the Roosters are still struggling to not only hit top gear, but they're also having trouble maintaining a consistent high level during games. Still, the signs are there and they never stop believing they are the best team in the comp. Win No.12 should be a formality.

The Roosters flexed their muscles last weekend. The really good teams grind away for 50-60 minutes and then the points flow in the last 20. I expect the Dogs to be defensively good again, but they just don’t have the attacking game to match it. They’ve only got to 20 on four occasions. The only concern for the Roosters is who plays dummy half with Jake Friend out. Roosters by 14

Latrell Mitchell remains on track for the tryscoring and pointscoring double. He currently leads the NRL in points (169) and is second in tries (12). Roosters fullback James Tedesco leads the NRL in line breaks (15) and tackle breaks (103).

He has a regulation first name but his middle name is up there with the best in the NRL. We're talking about one Dylan Hercules Napa, who will be hoping to lead the Bulldogs to an upset win over the premiers. 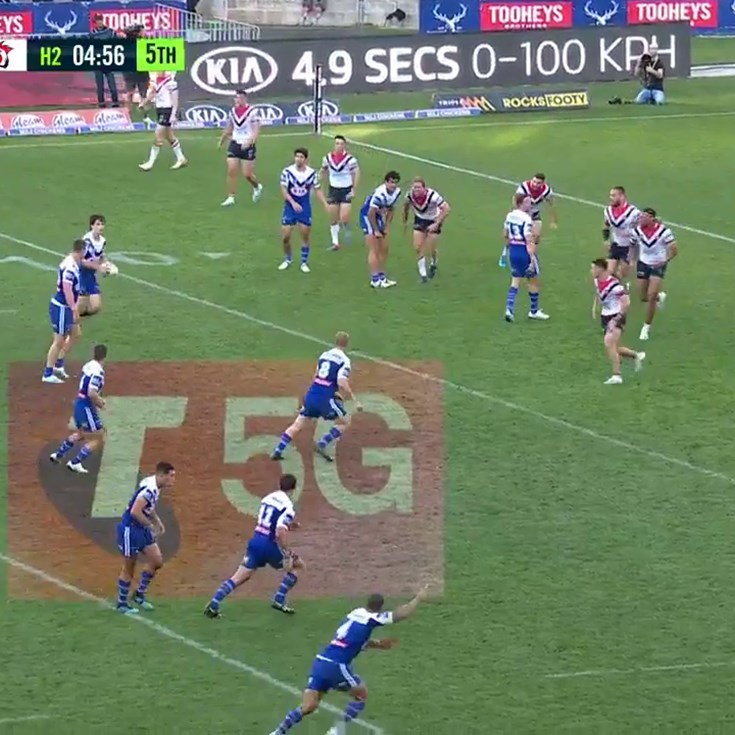