Canterbury pulled off their second upset in as many games to shock Newcastle 20-14 at McDonald Jones Stadium on Friday night and climb out of the Telstra Premiership basement.

Scoring two converted tries in a four-minute stretch while Knights prop James Gavet was in the sin-bin for a late tackle on Chris Smith, the Bulldogs clawed back an 8-0 deficit to consolidate their 14-12 victory over the Sharks a fortnight ago and put a dent in Newcastle’s play-off campaign.

After Penrith’s 24-2 victory over Gold Coast earlier in the night, the Bulldogs leap-frogged the Titans to leave the embattled Robina-based club in last place.

Newcastle were chasing an eighth win from their past 10 matches but have now lost three of their past four heading into a game against the second-placed Roosters at the Sydney Cricket Ground next Saturday.

Fijian international Brandon Wakeham sparked the Bulldogs with two pieces of brilliance in the 67th and 71st minutes, creating tries for Corey Harawira-Naera and Reimis Smith.

Newcastle began well and when they jumped to a 6-0 lead after five minutes, it looked like it was going to be their night, but the Bulldogs had other ideas.

Fresh from his role in helping NSW win the Origin decider last Wednesday night, Knights halfback and captain Mitchell Pearce threw a 20-metre left-to-right harbour bridge pass over the out-stretched arms of Nick Meaney for Shaun Kenny-Dowall to score in the fifth minute.

Pearce was one of four Newcastle players to back up after the Blues’ 26-20 victory over Queensland at ANZ Stadium. He and props Daniel Saifiti and Tim Glasby started the game, and David Klemmer came off the bench against his former club.

Mason Lino converted Kenny-Dowall’s try from the sideline to give the Knights a 6-0 lead.

The Bulldogs had a chance to hit back five minutes later but winger Reimis Smith could not handle Will Hopoate’s no-look flick pass with the line looming.

Newcastle continued to dominate the middle of the field, giving Pearce and Connor Watson room to scheme and create, but could not convert their early advantage into further points.

Sione Mata’utia regathered Pearce’s grubber kick in the 15th minute but was held up over the line.

Despite being on the back foot early on, Canterbury recovered and counter-attacked by spreading the ball to the edges with quick passes and changes of direction.

Bulldogs centre Marcelo Montoya appeared certain to score when he steamed on to a Jack Cogger pass in the 22nd minute but initially grounded the ball on Jamie Buhrer’s leg then was held up.

Lino’s one-on-one strip earned the Knights another six tackles on Canterbury’s line but Pearce lost the ball in a tackle before the end of the set and another scoring opportunity went begging.

Knights centre Kurt Mann was replaced in the 27th minute when he appeared to aggravate a sternum injury while conceding an escort penalty. Mann’s misfortune gave Tautau Moga his first appearance in the NRL since undergoing a fourth knee reconstruction in April last year.

Both sides were guilty of missed tackles and sloppy handling in the final 10 minutes of the half and the Knights had to settle for a 6-0 half-time lead despite having the upper hand.

Newcastle turned down penalty goal attempts in the 25th and 30th minutes, despite being within kicking range. Instead, they backed themselves to crack Canterbury’s line, but the Bulldogs held firm.

They did not decline a third opportunity when awarded a penalty in the 47th minute for Dylan Napa’s high tackle on Josh King, and Lino kicked the goal from close range to extend their lead to 8-0.

From the play-the-ball, the Bulldogs shifted the ball to the right against Newcastle’s back-pedalling defence and Hopoate stepped inside attempted tackles Gavet and Danny Levi to score.

Hopoate scores after Montoya breaks away

Former Knight Nick Meaney converted to cut the deficit to 8-6, then levelled the scores five minutes later when he kicked a penalty after Gavet’s late tackle on Bulldogs lock Chris Smith.

Referee Matt Cecchin deemed the tackle “forceful and late”, and Gavet was reported and banished to the sin-bin for 10 minutes.

While Gavet was off the field, Wakeham delivered a short ball for Harawira-Naera to crawl over and score in the 67th minute, then four minutes later planted a pin-point cross-field kick for Reimis Smith to touch down out wide.

Meaney converted both tries to build a 20-8 lead but there were still some nervous moments to endure when Napa spilled a pass in front of his own posts in the 73rd minute and Kenny-Dowall scooped up the scraps to score between the sticks.

Lino converted to make it 20-14 but Newcastle’s last chance came and went when Mann’s speculative pass in the 78th minute was intercepted. 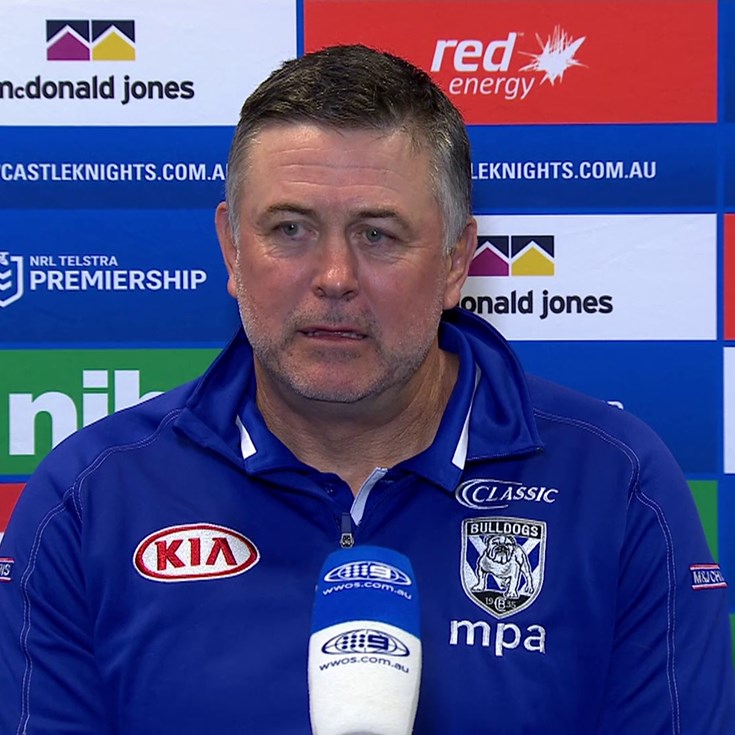