A look back at Aiden Tolman’s journey to 250 NRL games ahead of the club’s clash with the Sharks on Sunday afternoon at ANZ Stadium.

Aiden Tolman makes his NRL debut for the Melbourne Storm in round six against the Canberra Raiders. Tolman starts from the bench in jersey 17 and the Strom claim a seven-point win over the Raiders. He finishes the season with seven games under his belt and was a member of the preliminary final side that defeated the Cronulla Sharks to advance to the Grand Final.

Tolman plays every game for the Storm in 2009, finishing with 27 appearances. He starts from the interchange bench on 18 occasions and features in the starting side seven times, including the 2009 Grand Final. The prop forward crosses for his first NRL try in the Storm’s round 13 victory over the Brisbane Broncos and ends the season with three tries.

Tolman plays his 50th NRL match against the Canberra Raiders and scores a try in the Storm’s final game of the season against the Newcastle Knights. On May 18, the Bulldogs announce Tolman will be joining the club on a three-year contract.

Tolman joins the Bulldogs from the Storm and makes his club debut in the opening round of the season, where Canterbury claim a 24-14 victory over the Wests Tigers. He scores his first try for the club against the Rabbitohs in round seven and earns selection in the Country rugby league team that defeats City, 18-14. In his first season with the club, Tolman is named the Club’s NRL Player of the Year.

Tolman plays every game for the club in 2012 and was a member of the Grand Final team that went down to the Storm, 14-4. He scores a try in the club’s 23-22 victory over the Wests Tigers and collects the Coaches Award alongside James Graham at season’s end. The prop forward plays his 100th NRL match against the South Sydney Rabbitohs in the side’s 32-8 win over the Bunnies in the Preliminary Final.

Tolman features in 25 games for the club, scoring a try in round 11 against the Brisbane Broncos and is selected in the Country team that defeats City Origin.

Tolman plays 22 matches for the club and is a member of the Grand Final team that went down to the South Sydney Rabbitohs. The prop forward scores two tries throughout the year and is selected for Country in the front-row.

Tolman plays his 150th NRL match in the opening game of the season against the Penrith Panthers. He scores a try against the Brisbane Broncos in round 22 and plays his 100th NRL and club game for the Bulldogs in round four. Tolman receives the Dr George Peponis Medal as the NRL Player of the Year alongside Brett Morris and is named in the Bulldogs’ Team of the Decade during the club’s 80th anniversary gala dinner.

Tolman plays every game for the club in 2016 and carries the ball for more than 3000 metres for the season. He crosses the try-line during the club’s round 12 clash with the Canberra Raiders.

A member of the senior leadership group, the club extends Tolman’s contract for another three years to keep him with the club until the end of the 2020 season.

Aiden plays in all 24 games for the club, scoring a try in the final game of the season and finishes the year as the club’s number one tackler with 908 tackles. Tolman plays his 150th Bulldogs NRL game against the Tigers in round eight and his 200th NRL match against the Broncos in round five. He collects the Coaches award at the club’s presentation night.

Tolman plays 16 games for the club after missing 10 weeks with an ankle injury and is announced as the Clubman of the Year at the awards night.

Tolman enters his ninth season at Canterbury as the eldest and most experienced player on the club’s roster. He has featured in all 14 games to date, averages 133.4 run metres, 37 tackles and 58 minutes per game. The Bulldogs round 15 clash against the Cronulla Sharks will see Aiden play his 250th NRL match. 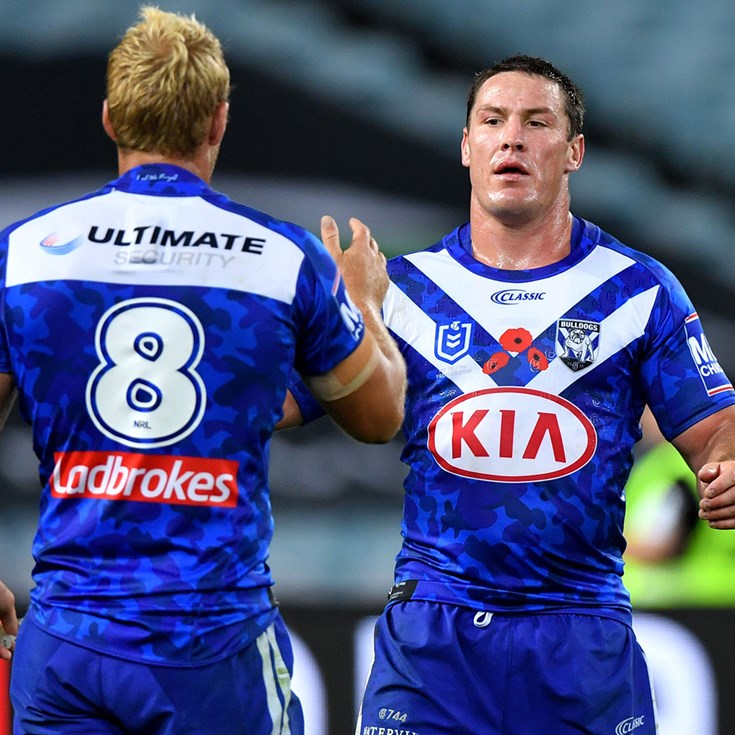 Consistency the key to Tolman's game

Elliott: He is an extreme competitor