The Bulldogs will return to their spiritual home, Belmore Sports Ground to take on the Storm (Sunday 26th May, 2pm kick off) looking for back to back wins after last week’s 22-16 comeback victory over the Gold Coast Titans.

The boys from Belmore are finally back in the winner’s circle following their 22-16 comeback victory over the Gold Coast Titans.

It looked like the Bulldogs were in for a long afternoon early on, finding themselves 16-0 down after just 17 minutes courtesy of two Dale Copley tries and a pair of penalties from Ashley Taylor.

But the Bulldogs got themselves on the board through Marcelo Montoya who got on the end of a clever kick from Kieran Foran to score before Jayden Okunbor crossed after a darting run through the centre of the Titans defence to get his side back within four points after a successful conversion from Nick Meany.

A cagey start to the second half followed before Okunbor crossed again for his double, with Meany adding the extras to give his side for the lead for the first time.

The Bulldogs weren’t done yet however, with Jack Cogger gliding his way through to score again late on and seal the result.

This sets the Bulldogs up nicely for their huge Belmore clash against the Storm on Sunday, who got out of jail once again in their tight 24-22 win over Wests Tigers last week.

The Storm were less than convincing in round 10, escaping with a slim 2-point win having been pushed right to the end by a valiant Wests Tigers side at AAMI Park on Thursday.

The sides traded penalties early on, with the Tigers leading 6-2 before Ryan Papenhuyzen crossed for Melbourne for the evenings first try.

It wouldn’t take long for Wests to hit back however, as Josh Aloiai crashed over just minutes later, before Luke Brooks added a second just after half time.

From there the sides traded tries, before Will Chambers ripped through the Tigers defence in the 77th minute for what would turn out to be the winning try.

This wasn’t the first time the Storm have been pushed this season and will need a much-improved performance if they’re to get up against the Dogs on their home turf.

Captain Cameron Smith and star five-eighth Cameron Munster will be key for Melbourne in this game, and Craig Bellamy will be looking to them to ensure a fast start against a fired-up Bulldogs side.

Club captain Smith has 5 try assists and a further 3 line-break assists in 10 appearances so far this season, whilst also showing his solidity in defence with 415 tackles made at a 92% efficiency rate.

When Smith is on, the Storm are on, and put simply, he must be shut down if the Bulldogs are any shot on Sunday.

In addition to Smith, the ‘Dogs will be keen to keep Cameron Munster quiet.

The five-eighth has 5 tries and 4 try assists in 10 games this season and will be keen to exploit any defensive weaknesses in a leaky Bulldogs side.

The Storm will be without prop Christian Welch this weekend after he suffered a knee injury late in the first half of their win over the Tigers.

Meanwhile Albert Vete, Scott Drinkwater, Curtis Scott and Tom Eisenhuth all remain on the casualties list, although fullback Jahrome Hughes could return after missing the Tigers game with a concussion suffered against the Eels in round 9.

The sides last met in Round 4 at AAMI Park, with the Storm suffering a serious scare, but ultimately scraping past a valiant Bulldogs side.

The ‘Dogs got off to a fast start and lead 12-0 after 22 minutes thanks to tries from Kerrod Holland and Jayden Okunbor, before Melbourne got on the board through Will Chambers.

The Storm kicked on from there, scoring a further two unanswered tries through Tui Kamikamica and Cameron Munster to give themselves the lead.

The Bulldogs pulled one back with just three minutes to play through Reimis Smith, but with Rhyse Martin failing to convert his side remained two points adrift with little time to score again, the game ending 18-16 to the home side.

Despite the result there were plenty of positive signs for a young Bulldogs side, who were without star man Kieran Foran on the day, and they will certainly feel they’re a chance this weekend with Foran back in the side. 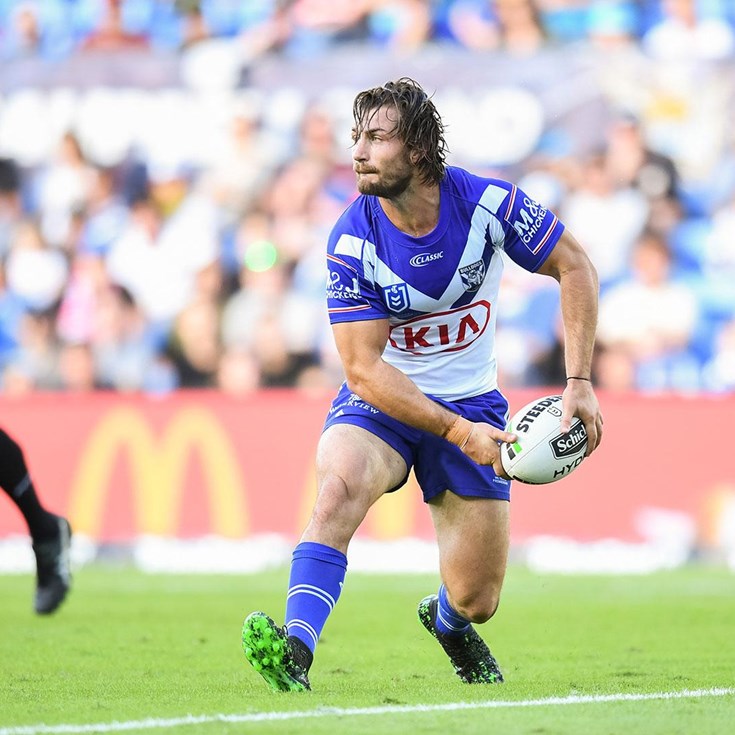 Napa: I'm excited to run out where we train each day