The Bulldogs shook up their football department last week letting four coaching staff go but it didn't change the on-field result with an 18-10 loss to Manly - their third for the season by eight points or less.

That's now six defeats from eight games. However, this week's opposition at Suncorp Stadium hasn't fared much better. The Knights are in the bottom-half of the NRL ladder with a 3-5 record.

But they keep edging upwards off the back of two straight wins, currently lying 10th after being 15th just two weeks ago.

Regardless both Dean Pay and Nathan Brown will see this result as a chance to retrieve further confidence and belief in making the back end of their seasons better.

Bulldogs: Kieran Foran returns from injury at halfback and Adam Elliott joins the starting side. Dean Pay initially dropped Ofahiki Ogden to the reserves and promoted Sauaso Sue to the bench, but Ogden was given a reprieve and is on the bench alongside Sue. Lachlan Lewis was dropped on Thursday, while Rhyse Martin and Kerrod Holland were officially axed as expected an hour before kick-off. Corey Harawira-Naera withdrew during the week for personal reasons.

Knights: Just one late change for coach Nathan Brown, with Jesse Ramien given the nod to start in the centres and Sione Mata'Utia moving back to the bench. Josh King and Pasami Saulo were omitted an hour prior to kick-off, while Mason Lino and Jamie Buhrer dropped off the reserves list on Friday. The Knights are seeking their third straight win.

Bulldogs fullback Nick Meaney plays against the immovable object at No.1 for the Knights in Kalyn Ponga - or more simply, the reason Meaney knew he'd have to leave the Hunter to get more NRL games. The 21-year-old has now played five with the Bulldogs after his five with the Knights in 2018. But in averaging four tackle-busts a game in 2019 he's set to increase his time in the NRL.

Kieran Foran returning from a five-week lay-off should lift the spirits, as he renews his burgeoning halves combination with Lachlan Lewis before the ankle injury intervened. With Jeremy Marshall-King's improving work around the ruck (42 tackles last week) and the post-contact metres by Dylan Napa, Rhyse Martin and Josh Jackson, Foran has the platform to work with.

For the Knights to win

Mitchell Pearce needs to have another game impact like he did against the Warriors last week (1 line-break, 2 line-break assists, 2 try assists, 2 tackle-busts) or the Eels a week earlier, when along with a try, he had a mammoth 20 kicks for 412 metres. If the No.7 can get near those kinds of figures again the Bulldogs won't be able to keep up.

Pearce (Roosters) and Lewis (Bulldogs) are both in the NRL top-five for the number of kicks they let fly and the distance in metres they make. This will make for a first class display of positional and attacking kicks.

Newcastle's Edrick Lee gets to celebrate his 100th NRL game in Knights colours after five seasons with the Raiders and two with the Sharks. 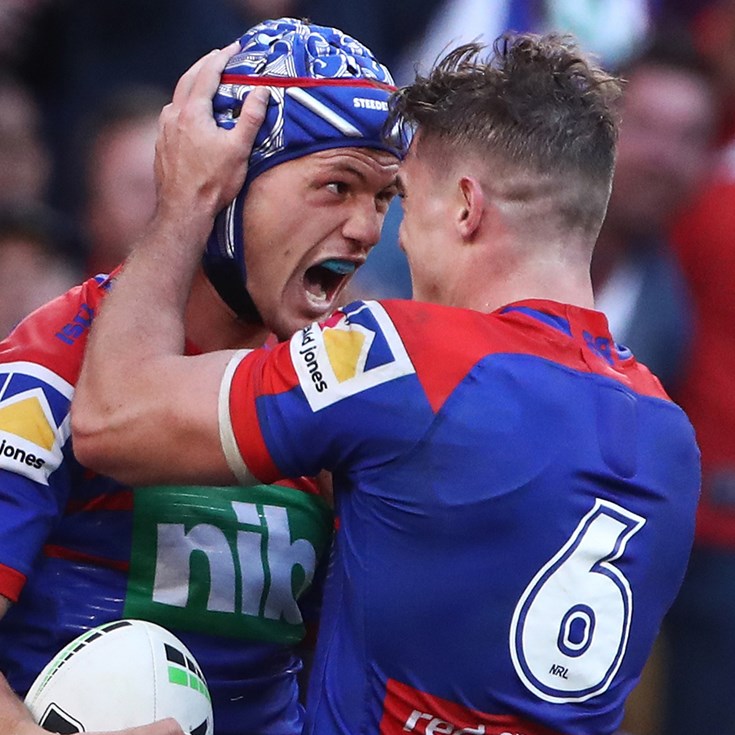