South Sydney maintained their top-four position on the NRL ladder but without making any real message of intent in their 14-6 win over the Bulldogs at ANZ Stadium on Friday.

It was the Rabbitohs’ fifth win of the season but it’s fair to say it was their least convincing. It was by no means as slick as the five-try demolition of the Warriors at the Sunshine Coast a week ago.

The grinding nature of this annual Good Friday tussle was evidenced by the fact no points were scored in the second half. It was the first scoreless second half  since the Bulldogs-Storm game in round one of 2017.

With such limited opportunities on offer to post points, when Bulldogs winger Jayden Okunbor and then centre Kerrod Holland were dragged over the eastern sideline close to the corner post early in the second half, the fans threw their hands in the air.

Then Corey Harawira-Naera missed the bounce off a deft Lachlan Lewis kick, with the Rabbitohs line open. Coach Dean Pay put his head in his hands.

And why not. By halftime the home side had made 60 more tackles. By full-time it was only 43 more but the Bulldogs had missed 45.

They defended their hearts out for most of the game but that can’t be the only element to the Bulldogs game, and even that needs more attention.

Bennett: Referees easing off the whistle is impacting the game

Their handling errors may have only tallied 11, but it was nearly double the Rabbitohs and so were the penalties (12-8 against the Bulldogs).

To be fair, the Bulldogs lost fullback Nick Meaney for the majority of the second half with a severe laceration to his finger. Will Hopoate went to the back and Corey Harawira-Naera, who had passed an HIA test during the break, went to right centre.

But Pay’s team needs to provide far more in attack.

Same goes for Souths on Friday’s display. Coach Wayne Bennett will have to find out why the flame seems to have gone out in the Rabbitohs. Often during the match Souths players were standing still and passing the ball around like it was a training drill.

The Bulldogs were counting their lucky stars that they were only eight points down at halftime.

Souths were hanging on to a 67 per cent possession rate, had six more sets with the ball, and had given away less penalties.

Both sides had a try disallowed in the opening 40 – Holland in the 10th minute when he pushed Dane Gagai in the back to get to the ball, and Liam Knight’s obstruction in the 40th minute robbing Corey Allen.

The points came early. Campbell Graham slid over for his sixth try in six games in just the third minute. Then bullocking Ofahiki Ogden ran over the top of Damien Cook to score next to the posts in the 13th.

From then the match descended into your classic Good Friday arm wrestle, highlighted by Sam Burgess’ continual exchanges – both verbal and physical - with young Dogs halfback Lachlan Lewis. 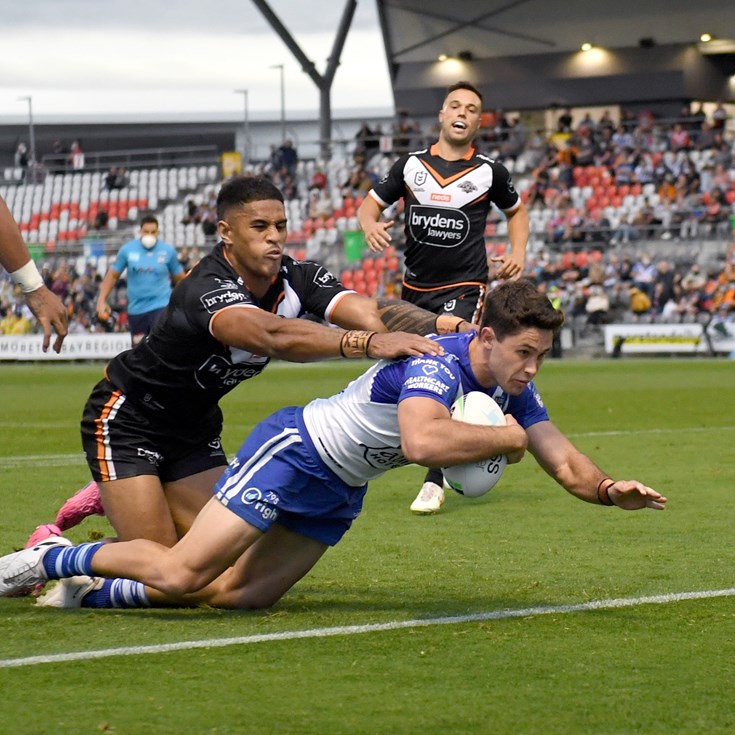 Biggest victory over the Rabbitohs