The stage-managed pre-game walks of the 21st century were nowhere to be seen in State of Origin football in the 1980s.

Instead, it was bacon and eggs for breakfast, teaching Peter Sterling a lesson or two in the local video game arcade and a pub lunch before attention turned to the main event later that night.

Then, once the game was over, the real fun began.

Half an hour after the game, at about a quarter to 10, I grabbed a dozen cans and headed outside the dressing room. I knew some old mates from Inverell were waiting around to catch up on old times.

People were packed in trying to get autographs and talk with players, so we went out onto the field. Just sat down on Lang Park and drank and laughed and had a good time.

It had been a long day, a real bugger of a long day. My room-mate was Mick O'Connor and we'd both slept well the previous night. Got up at 8am and had bacon, eggs and toast for breakfast. Then tried to find something to do.

So we teamed up for a game of tennis on a half court against Sterlo and "Bert" (Kenny). They flogged us! A bloody good team. But it was great to give my mind a rest from thinking about the State of Origin.

Then we went off and played pinball at Las Vegas. It was like a pentathlon - pinnies, Pacman, soccer ... we beat those Eels easily - Sterlo was bloody hopeless.

A few of the Queensland blokes were there too — [Dale] Shearer, [Chris] Close and [Colin] Scott. We did our own thing. After a couple of hours - I don't normally go to pinball parlours by the way - we nipped around to the pub next door for lunch.

[Coach] Ron Willey had let everybody do their own thing. He knew we were thinking about the match and didn't want to force too much on us.

Anyway, we caught up with most of the team at the pub.

I got stuck into a big rump steak. Well, "Junior" (Pearce) was sitting next to me and had a go — "Why are you eating that steak?" he complained.

He had raced over to the shop for banana sandwiches! Everywhere he goes he carries his wheatgerm and Sustagen. He looked really dirty when I put salt all over the steak.

Occasionally little points to do with the game would pop up. I grabbed Royce Simmons for a moment and said, "Just remember to tap the blokes playing the ball on the backside to get 'em to play it quickly so I've got room to kick".

You have to reinforce things because we all play different games in different teams.

I get on with all the boys — there's no bitterness, which is the most important thing in a football side. It's bloody team spirit that wins games. It really is. We would die for each other.

That close feeling gets strong as soon as you land in Brisbane. When I stepped off that plane on the Monday I had a different sensation. People look upon you as second-rate and that adds to the build-up. Only 15 of us against the whole of Queensland.

By mid-afternoon a few of the guys slipped back to the hotel for a bit of a sleep. I tried to, but Terry Lamb and Bert - hyperactive blokes - won't let you sleep. Real practical jokers. Bert rang me up and pretended to be Sydney Morning Herald journalist Alan Clarkson. "You mind if I talk to you for a moment?" he said.

That went on for a while before the penny dropped. Just can't help himself, Bert.

I locked myself up properly then - phone off the hook, door bolted, TV and radio on, and dozed until 5 o'clock when we had a team meeting.

It was like a pentathlon - pinnies, Pacman, soccer ... we beat those Eels easily - Sterlo was bloody hopeless.

Blokes were getting serious now; they had started to quieten down. At the meeting, we all said what we thought was most important in the game. The kicking was crucial, I reckoned.

Their big, fat forwards wouldn't like turning around and bringing the ball back. And our chasing had to be keen.

"Junior" never got up and tried to ram anything down our throats - do this, do that. Everyone was kind of humble. Ron just clapped his hands and said, "Let's go." It was the first time I had seen him all day.

It was 5.30pm when we jumped on the bus. I don't know if they were jerking us around but the driver took us via Townsville to get to Lang Park. What was a 10-minute trip the day before stretched to 25 minutes. Boy, was I agitated.

As we drove along, every bugger gave us the finger or yelled out abuse ... in my first game up there (1984) a couple of cans were thrown in the tunnel and I wondered if it would be the same. They're definitely different up there.

It had been all quiet on the bus except for blokes having a word on the side, a reminder about something. Then we hit Lang Park and woke up.

The under 19s were playing so we all sat in the stand and watched. Their win was a boost. No one hassled us, though; still, it was obvious we weren't welcome.

People would be lookin' out the corner of their eyes. You can feel that they are all against you. And that got my back up. I started to feel a bit aggressive.

At a quarter to six we went down to the shed. A couple of the Queenslanders were standing in the tunnel but nothing was said.

I had my right ankle strapped first — always do after busting it a long time ago. Had a bit of a stretch, a bit of a punch. Just slipped over to a corner to get myself going.

The kicking was crucial, I reckoned. Their big, fat forwards wouldn't like turning around and bringing the ball back.

They're a big part of team spirit, and Roachy is looked upon by most blokes as being a leader. He gets me geed up good without going overboard.

Sterlo had only a little to say but everyone listens because of his status and he's a heady footballer. He refreshed our memories on the simple points. Ron went around to each bloke and encouraged him, which I appreciated a lot.

I had wondered what he really thought of me and I knew I had all his respect when he said: "I've admired you for a long time." That got me going too. I was ready to blow my stack.

When we ran out the noise was deafening. Oh, the boos!!! I couldn't hear a teammate yelling to me from 10 metres away.

All the time my mind was on Gene Miles. It had been for nine days since the Sunday I was picked. I had played against him once, in a night cup match two years ago. But I was sick of reading in the papers Miles this, Mal Meninga that, like they're Jesus Christ. I really had the ------.

I was conscious of trying to be better than Miles and was looking for him. He's a good footballer but takes a while to get wound up and Wally Lewis made him look good.

Remember when Roycey went down early? And how he got back into the line . .. that was a sign of how the guys felt for each other.

He didn't know where he was but all he could think about was not leaving a hole. You more or less kill for your teammates, which you've got to do in State of Origin.

They had the ball all the time it seemed, and we made some bad mistakes to let them in. I thought
referee Kevin Roberts gave us a hard go - penalties 9-2 - and figured he'd have to even accounts in the second half (2-1 to NSW).

At half-time, Ron stressed quick play-the-balls, tight defence and talk. It's so simple, I know, but that's how you win games. Too many blokes forget the basics.

But when they scored to lead 16-12 I thought we'd be pushing it uphill. We were stunned. They had a wind and Wally's kicking was beautiful.

Just before Royce's try we should have had them on the left with a long ball but a gang of them came from nowhere. All that mattered now was Mick O'Connor's conversion. The crowd gave it to him and that got me angry. But he showed 'em.

From then on we had heaps of possession and the guys chased my kicks fantastically. The win was so sweet after every bastard had written us off. And I was ready to play another game, I was so pumped.

I ducked out of the main dressing room into an adjoining one to be by myself. I need that. Other players came in, away from the yahoos. There was a lot of back-slapping, there always is. But it was genuine and warm.

Then I remembered the lads from Inverell, where the family lived for 18 months while I finished high school. After an hour or so we all had to make tracks.

There was a function at the Park Royal Hotel where we tucked into chicken mornay before jumping into our going-out gear at midnight. We converged on a nightclub called Rosie's until three in the morning which was jammed with girls sussing out the single guys in the team.

We drank beer and had pillow fights until six or seven.

Some blokes kicked on but I headed back to our hotel with others. We drank beer and had pillow fights until six or seven.

After an hour's sleep I woke up and drank gallons of orange juice. I had destroyed a few brain cells. My ribs were killing me and I wished that I'd put ice on 'em.

Then it dawned on me that I had to play against Illawarra this Sunday. The euphoria was over. 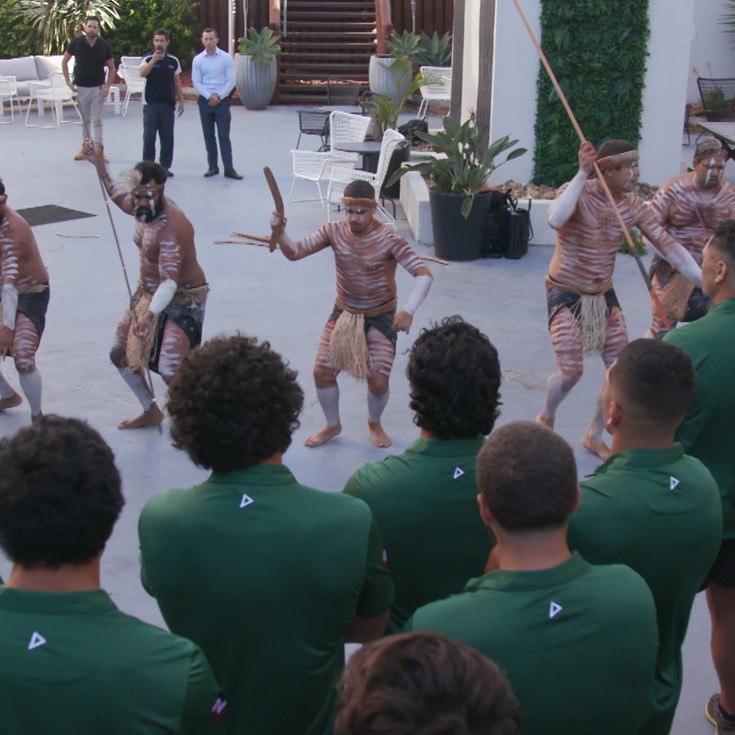