Cronulla's 30-18 win over Canterbury at ANZ Stadium has created history with the four highest-placed teams finishing on the same competition points for the first time in the 111-year history of the premiership.

The Sharks finished the season fourth, trailing the Roosters, Storm and Rabbitohs on for and against, making it the closest finish at the top of the ladder of all time, bettering the 1941 season when Balmain, Canterbury and Eastern Suburbs finished on 18 points, one ahead of St George.

It was another high-class performance from in-form fullback Valentine Holmes, who scored his 21st try for the season, which helped the Sharks stave off a gutsy Bulldogs outfit.

In the final game in blue and white of Brett and Josh Morris, Greg Eastwood and Matt Frawley, Canterbury staged several fightbacks each time Cronulla looked to be pulling away but the class of Holmes, Andrew Fifita, Chad Townsend and Josh Dugan helped Cronulla to a vital win.

Cronulla entered the final day of the regular season knowing a loss to Canterbury followed by a big Brisbane win over Manly could potentially tip them out of the top four and a crucial second chance in September but a three-try burst early in the game put them on the front foot.

Holmes was best on field with a four-pointer and three try assists, creating two of those for left-side flanker Sosaia Feki.

The Sharks managed to concede an error and a penalty from the opening two plays of the game to hand Canterbury a two-point head start but went on to dominate the next 20 minutes, posting three unanswered tries.

Some nice shape on the left resulted in Kurt Capewell crossing for the game's first four-pointer in the 12th minute and some sustained pressure shortly after resulted in Fifita crossing despite a hint of an obstruction from Luke Lewis.

The Sharks were on a roll when Dugan sprinted through on an attacking Chad Townsend grubber to make is 16-2 after 22 minutes before the Bulldogs fightback started.

A long-range Josh Morris break culminated in Will Hopoate powering through three defenders to score and another long-range break from Hopoate helped the home team attack again.

Smart work from Michael Lichaa to take the quick tap from a penalty 11 metres out and bump away from Jayden Brailey to score closed the gap to 16-12.

However the Sharks struck a killer blow in the shadows of half-time.

Brett Morris failed to control a tough bomb under pressure to hand the Sharks a full set at the line and Feki tiptoed down the sideline moments later to earn his team a 20-12 advantage at the break.

It became a quick double-strike not long after the resumption as Holmes carved through Canterbury's brittle right edge in the 46th minute.

The Bulldogs hit back through Brett Morris, who was on the end of a lovely lobbed pass over the top from Hopoate, who was Canterbury's best on the day with a try, try assist, eight busts and 207 metres.

A Bulldogs error near halfway in their set after points helped Cronulla hit straight back as Holmes again showed up the Dogs right side defence with a well-worked scrum play for Feki's second try.

That made it 30-18 with just over 20 minutes to play and it ended up being the final score as both teams struggled to make anything of their attacking chances in the final stages.

The Bulldogs can be encouraged by a bright finish to their season with the emergence of some future stars and impressive wins over the Dragons, Warriors and Broncos.

The Sharks move on to a qualifying final against the Roosters next week with the winner earning a week off and a ticket to a grand final qualifier.

News & Notes: Michael Lichaa played his 100th NRL game ... Valentine Holmes has scored nine tries in his last eight games and finished the season with 21 tries, second only behind Warriors winger David Fusitua with 22 tries ... Sharks next week play a qualifying final against minor premiers the Roosters in Sydney. 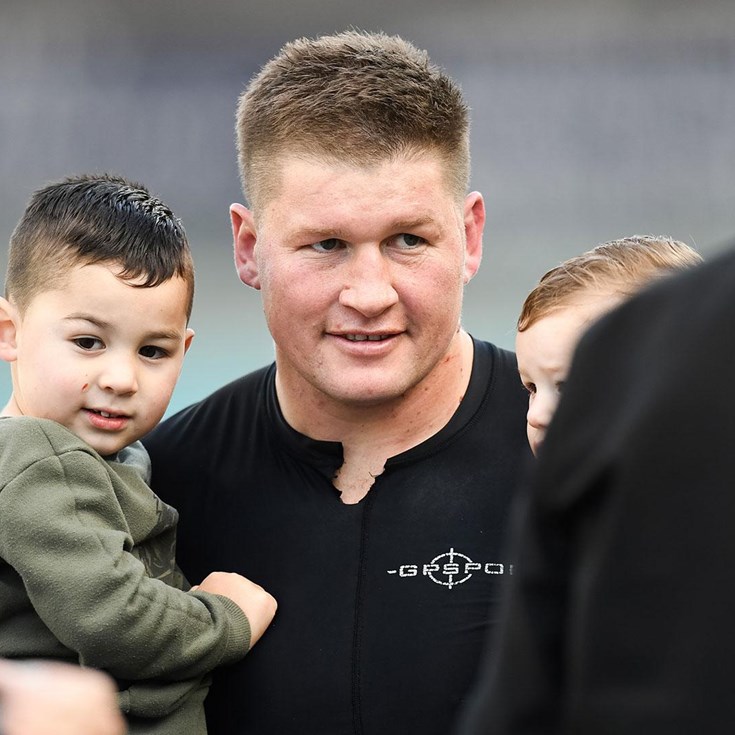 Lichaa: We've found a style of play that works for us

Frawley: We have a special playing group here