Which club skipper has been the best of the best in the 2018 Telstra Premiership season? Our reporters and contributors have their say.

Hayley Byrnes (NRL.com reporter)
Roger Tuivasa-Sheck: There were question marks when he took over the captaincy a couple of years ago from Ryan Hoffman but he's grown into the role, has got the team firing and his own form has been fantastic. He's the first to admit he was initially uncomfortable with the role, but RTS has been able to continue to develop under experienced teammates like Tohu Harris, Adam Blair and Blake Green.

Michael Chammas (NRL.com chief reporter)
Greg Inglis: Last year Greg Inglis lasted just eight minutes of the season. He battled his own demons and spent time at a rehab clinic such were the concerns over his mental health. Months later South Sydney sacked coach Michael Maguire and many feared South Sydney would take years to recover. But Inglis has returned a man on a mission and, together with rookie coach Anthony Seibold, has the Rabbitohs primed for a premiership assault in the coming weeks.

Chris Kennedy (NRL.com reporter)
Josh Jackson: For a first-year captain, playing under a first year coach, at a club that has seen an exodus of senior players (one that continued into this season) combined with injuries to key players and a fan base deeply frustrated at both current and former management, it would have been easy for Jackson to shrug his shoulders and go through the motions and hope for brighter teams next season. He has done the opposite. Jackson has been among Canterbury's best every week this season and not just held the squad together through some tough times but rallied them, led a host of younger players into first grade and helped them flourish to the point a team once staring at a wooden spoon has now won four of six games – many in commanding fashion. Jackson has leadership written all over him.

Dan Walsh (NRL.com reporter)
Roger Tuivasa-Sheck: It's easy to forget he's still only 25 and as the most expensive import in Warriors history, he's always carried serious expectation in a perennially underperforming side. Has returned to his spellbinding best to be in Dally M medal contention and his teammates have followed his lead, with RTS's impressive efforts as the last line of defence a standout early in the year as the Warriors tackled with rarely seen resolve.

Margie McDonald (NRL.com senior reporter)
Ryan James: To get all the NSW Origin gear – twice – but not get on the field once, would have been a savage hit. But James came out and played some of his best football of the year throughout the Origin period. Gold Coast hadn't won outside of Queensland all year and then boom-boom Rounds 15 and 16 wins at two of the most difficult grounds in the NRL: Belmore and Leichhardt Ovals. James was key to both those wins with his hit-ups, metres and tackle-breaks – he also scored a try in both games.

Paul Suttor (NRL.com editor)
Josh Jackson: Amid the rubble of Canterbury's 2018 Telstra Premiership campaign, their fearless leader has been just that – he has led from the front without flinching despite teammates departing mid-season, star recruit Kieran Foran being ineffective and injured, and the ramifications of the club's salary cap predicament virtually making it a massive achievement for the Dogs to avoid the wooden spoon.

Zac Bailey (NRL.com reporter)
Roger Tuivasa-Sheck: A lot of critics questioned his leadership credentials when he was named captain of the Warriors ahead of 2017. He's clearly learned a lot in 18 months. He has led from the front on-field all year to lead the Warriors to their first finals campaign since 2011 and has also been one of the key drivers of the club's new culture implemented by coach Stephen Kearney.

Mary Konstantopoulos (Ladies Who League)
Cameron Smith: In a year where many predicted that the Storm would falter with the loss of Cooper Cronk, he has again led the Storm admirably and has continued to be the general and mastermind for the team on the field. His decision to put his team first and retire from Origin just before the series showed his dedication to the team and also really helped the Storm maintain momentum during this usually tumultuous period of the season for them.

Scott Hazlewood (NRL.com reporter)
Greg Inglis: It's tough to go past him for the impact he's made on the Rabbitohs after coming back from injury. GI's presence on the field has been sorely been missed in the last six weeks, which saw Souths lose important games against the Roosters and Broncos. Even though his return came in a losing effort to the Raiders last round, Inglis was busy in attack and defence and looks set for a huge finals series.

Andrew Marmont (NRL.com reporter)
Cameron Smith: To guide a much weaker team (on paper) in 2018 to lead the ladder heading into last round of regular season is a special achievement. Consider they've fielded several halfbacks, key injuries and unusually high number of suspensions, plus a heavy Origin toll - and Smith is still helping them find ways to win. If the Storm win the minor premiership, Smith is your captain of the season.

Peter Jolly (NRL.com reporter)
Roger Tuivasa-Sheck: The Warriors and their skipper have not got all the credit they deserve; a team that has boasted potential for a while but lacked consistency - that was until this year. New Zealand have had several injuries in 2018, which normally would have seen them wilt, but the fullback has led from the front and steadied the ship with outstanding individual form that not only has the Warriors a premiership contender, but has him favourite for the Dally M.

Tanisha Stanton (NRL.com reporter)
Russell Packer: He has been a monumental part of the Wests Tigers leadership group this year. He's led the pack which has had a positive influence on their backs to get the side off the bottom of the ladder. And although they just missed out on the top eight, we haven't seen the West Tigers play the way they have this year in a long time. He is also well respected among his teammates.

Alicia Newton (NRL.com reporter)
Josh Jackson: The inspirational leader has experienced a tough season in his first year in charge but has always looked for the positives out of a tough campaign. He lost his NSW jumper after claiming the Brad Fittler medal in 2016 and being one of the more consistent back-rowers in the competition. Given Canterbury's woes this year, you won't find a more passionate skipper.

Steve Renouf (Former Maroons centre)
Roger Tuivasa-Sheck: I've noticed how Roger has the respect of all his teammates and he's only 25. I reckon the Warriors would be one of the hardest teams to captain in the NRL. They have under-achieved in the past and the expectations are huge. This year they are on track for the finals and Tuivasa-Sheck's leadership is a major factor.

Jamie Soward (Former Blues five-eighth)
Roger Tuivasa-Sheck: The amount of scrutiny this team is under year after year would be hard for any captain but he has been in superb form this season and his leadership has grown.

David Piepers (Big League editor)
Roger Tuivasa-Sheck: He may have looked a little daunted by the weight of expectation last year, but he's come a long way in the past 12 months and it shows in his team's results. To assume leadership of a side containing Shaun Johnson, Issac Luke and Simon Mannering says something about the regard RTS is held in by his coach and team, and he's had little problem leading by example out on the pitch. Even when the team started losing and we were all happy to anticipate another late collapse, he almost single-handedly pulled them out of their minor slump and they're shaping as a real danger side in their first finals appearance in a long time.

Neil Cadigan (NRL.com reporter)
Ryan James. Despite what could have been soul-destroying setbacks of twice being given the expectation he would play for NSW only to be dumped out of the 17 at the 11th hour, and despite having to carry an enormous load on the field for the Titans, James has been a rock for his team. He has played 70 minutes of more in 16 games, in 11 of them he played the whole 80, as a front-rower! And of the field no captain portrays himself better.

Joel Gould (NRL.com reporter)
The Melbourne Storm appear set to claim another minor premiership and Cameron Smith has once again been front and centre in that achievement. Without Cooper Cronk beside him the 35-year-old has taken on more of the game management of the Storm side and done so with aplomb. Smith's match winning performances through the State of Origin period have proven to be the difference between the Storm being in prime position to challenge for a third title and being in contention for a fifth to eighth placing. His leadership in the big moments and the mundane ones remains peerless. 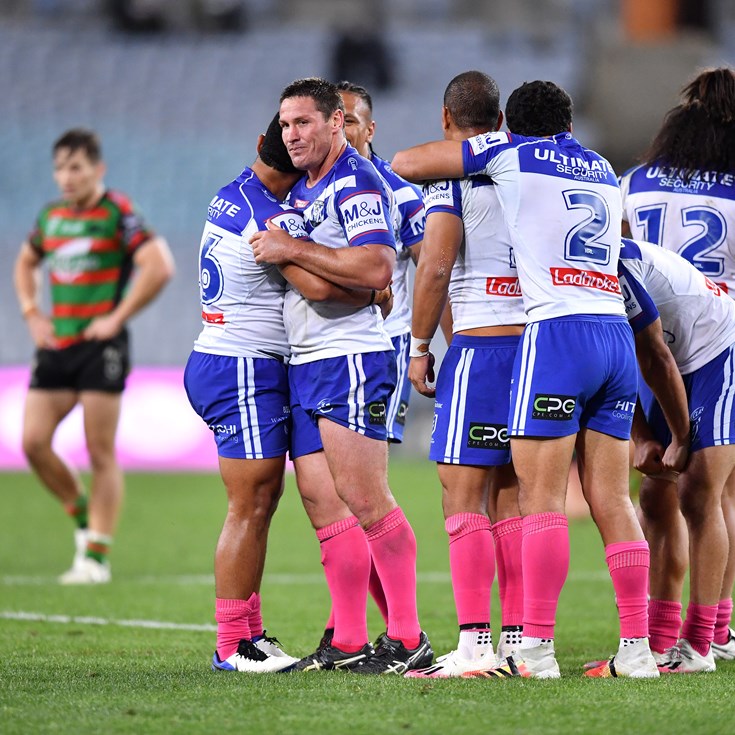