The visitors dominated first-half possession but had little to show for it at half time whereas the hosts blew the game apart in a 22-minute spell of second-half football in which they totally dominated possession and scored all three of their tries for the match.

Trbojevic and Cherry-Evans were the stars, with the fullback chiming into some sweeping plays and proving far too tough for the Bulldogs' right edge defence to handle while the skipper had no shortage of high-quality passes and kicks to starve Dean Pay's men of ball and threaten their line at every chance.

A 37-16 missed tackle count against Canterbury proved critical, while Manly dominated possession 59-41% in the second half – fuelled by three goal-line drop outs and the away side's 50% second half completion rate.

The Bulldogs' kicking game was largely ineffective, in part hurt by the game-day withdrawal of five-eighth Lachlan Lewis due to undisclosed personal reasons.

The news wasn't entirely good for Manly, who lost Martin Taupau and Brian Kelly late in the game to injuries.

After an early feeling out period, Cherry-Evans opened the scoring with a seventh-minute penalty goal but it was Canterbury with the better of the field position for most of the first half.

Despite a mountain of attacking ball their only points to show for it came via Reimis Smith's 20th-minute try.

The rapidly-improving winger burst on to a clever Michael Lichaa inside ball in the only four-pointer of the opening 40.

With the penalty count getting out of hand for an ill-disciplined home side, bench hooker Trent Hodkinson compounded the issue with a professional foul from a Bulldogs quick tap to land himself in the sin bin for the final 10 minutes of the half.

However the Bulldogs couldn't cash in on their advantage and a second Manly penalty goal were the only points scored before his return.

There was an almost complete momentum shift to the home side early in the second half with Canterbury completely starved of possession and not helping themselves with some poor errors.

When Manly spread it left from an attacking scrum in the 46th minute Tom Trbojevic got the first of his tries, getting outside Kerrod Holland.

The fullback had two tries in five minutes when Manly scored from a scrum play off a Rhyse Martin drop near his own line.

With another spread left, Trbojevic fed it to Brian Kelly who popped a superb late offload for Trbojevic to fall over the line.

From the time Jeremy Marshall-King's kick sailed out on the full in the 59th minute, the Dogs had to do a mountain of defending including four straight sets on their own line before the pressure eventually told when Addin Fonua-Blake crashed onto a Cherry-Evans short ball to make it 18-6 with just over 10 minutes to play.

The Bulldogs managed to earn some attacking ball over the final 10 minutes but brought themselves done with some poor execution as Manly held on to an 18-6 win – their first win at Lottoland in their past seven starts.

To mark Women in League Round, Lottoland was briefly renamed McGrath Foundation Stadium for the evening.

News and notes... Manly earned their first win at Lottoland in seven matches... Martin Taupau and Brian Kelly both picked up injuries... Trent Hodkinson was sinbinned in the 30th minute... Manly host the Titans at Lottoland next Friday while the Bulldogs are at home to the Warriors on Sunday. 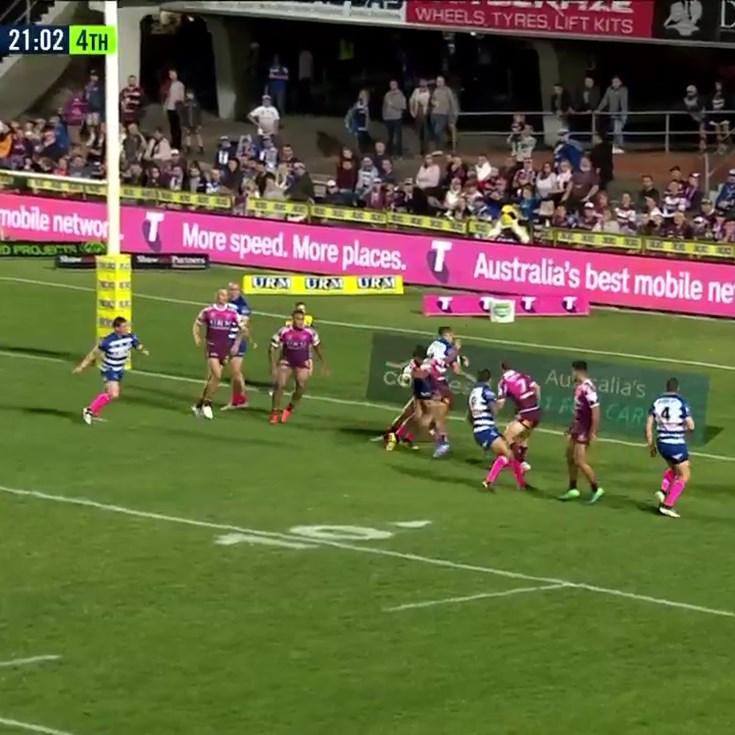