A third career hat-trick from winger Robert Jennings and a stunning contribution from Blues hooker Damien Cook have shored up the Rabbitohs' spot at the top of the Telstra Premiership ladder despite a disciplined and determined showing from Canterbury.

Jennings' third try moved him to 16 for the season and came off the back of enormous stints from NSW reps Cook and Angus Crichton just three days after a gruelling Holden State of Origin III.

Cook racked up 46 tackles, four busts, 122 metres and a line break while Crichton chipped in 179 meters and three busts, a line break and 28 tackles. Both got an early shower about 10 minutes from full-time once coach Anthony Seibold was satisfied the result was beyond doubt.

The 24-6 scoreline didn't do justice to what was one of Canterbury's most impressive efforts of 2018. Dogs skipper Josh Jackson was immense on the right edge in his 150th game while fullback Will Hopoate was outstanding, creating one try and racking up almost 300 metres with 10 busts.

It is the ninth straight win for Souths – the first time they have managed that feat since 1989 – while the Bulldogs remain ahead of only Parramatta at the foot of the ladder.

Souths threatened to shoot out of the blocks early but a clean break from Crichton in just the fourth minute did not pay dividends when the Blues back-rower's pass went astray.

The blue and whites produced several impressive pieces of defence in the opening 20 minutes to keep the ladder-leaders scoreless.

They opened the scoring via a Rhyse Martin penalty goal in the 19th minute but it was the red-hot Rabbitohs' left edge that created the first try with Cody Walker and Alex Johnston combining from a scrum play to send Jennings over for a four-pointer in the 27th minute.

It became a quick double strike when Cook shredded the Dogs up the middle to put NSW teammate Crichton in space. Crichton's neat pass sent Cody Walker through a gap with Reynolds supporting to score.

The impressive Bunnies defence produced try-savers from consecutive plays later in the half as Will Hopoate was held up then Reimis Smith was bundled into touch trying to score, allowing them to take their 12-2 advantage into half-time.

They stretched their lead via a penalty goal and from the next set Jennings joined Warrior David Fusitu'a atop the try-scoring leaderboard with his 15th four-pointer of the season. It came via a lovely Reynolds short-side grubber after spotting some space behind the line.

The Bulldogs quickly clawed one try back as Hopoate created their first try of the day with a lovely one-handed offload to put Smith over in the corner to make it 18-6 after 53 minutes.

The 15th-placed Bulldogs simply refused to yield and had by far the better of the next 20 minutes as Nu Brown added spark off the bench and Jeremy Marshall-King, Martin, Josh Morris and Hopoate all found space with long runs at different stages.

There was a no-try ruling against Aiden Tolman from the Bunker and Reimis Smith was bundled into touch, as the Rabbitohs showed the sort of defensive steel befitting the ladder-leaders.

After soaking up a long period of pressure it was the Bunnies who stretched their lead.

Jennings completed his third career hat-trick and went to the outright lead in the 2018 try-scoring stakes when he finished off yet another nice left-side shift in the 72nd minute.

Rabbitohs won their ninth straight game – the first time they have done so since 1989 ... Bulldogs skipper Josh Jackson played his 150th NRL game ... Robert Jennings' third career hat-trick moves him to the top of the season try-scoring leaderboard with 16 ... next week Bulldogs face Eels at ANZ Stadium on Thursday ... Souths also feature as the away team at ANZ Stadium when they take on Wests Tigers on Saturday ... Crowd 14,278.

Rabbitohs try of the year? 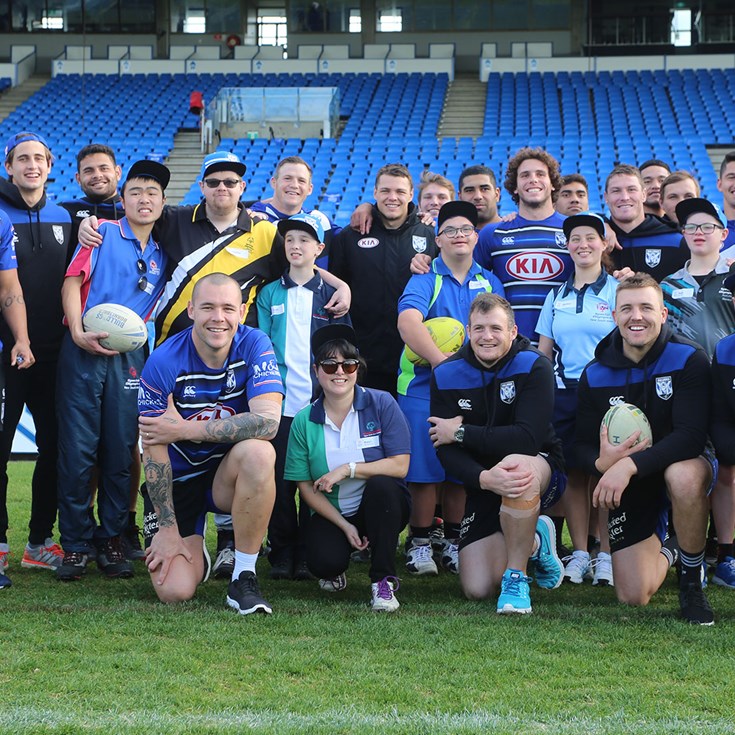 Why Jackson is loved by his teammates