And he would've breathed another sigh of relief when star centre Josh Morris was cleared to return from a knee injury. Morris hasn't played since round 11.

Of course, Canterbury still remain out of the finals picture with a 4-11 record and will probably play out the season with a team made up mostly of fringe first-graders, but they played traditional Bulldogs footy against the Knights, fighting hard for 80 minutes and relying on an all-round team effort rather than a few players.

The challenge for the rest of the season is to have that same approach and attitude in every game. It might not get them much higher on the ladder this year but will give the Doggies a solid base to build on in 2019.

The poor old Green Machine might need to bring in a psychologist to help them figure out why they have so much trouble hanging onto a lead. After being the better team for most of the game and losing yet again last week against Brisbane, it's anyone's guess what frame of mind the Raiders will be in this week.

Key match-up: While some theorists suggest Ricky Stuart's tension and anxiety on the sideline makes the Raiders too nervous to function confidently, others say the problem lies directly with the hot and cold performances of play-making duo Blake Austin and Aidan Sezer. The pair is under pressure to prove the critics wrong and both need big games on Saturday night.

For the Bulldogs to win: Forget about intricate game plans - the Doggies will be in every game for the rest of the season if they play with the same passion and purpose they displayed last week. Oh, and it wouldn't hurt if goal-kicking back-rower Rhyse Martin could kick 6/6 like he did last week when he knocked them over from everywhere against the Knights.

For the Raiders to win: Stop getting leads and see if they have better luck playing from behind. Obviously, that's an absurd strategy, but the Raiders' inability to hang onto a lead is beyond ridiculous. Team leaders Jarrod Croker and Josh Hodgson have to get their teammates all on the same page, while Sezer and Austin need to understand how important they are to Canberra's success.

Bulldogs stat attack: David Klemmer didn't let the sadness of having his best mate Aaron Woods leave for the Sharks stop him from turning in a monster display against the Knights. The Blues and Kangaroos prop finished with 200 running metres (including 85 post-contact metres), 33 tackles (at a 97 percent tackle efficiency), and four offloads.

Raiders stat attack: The 58 tries the Raiders have scored is good enough for second best in the NRL behind South Sydney. In grim news, they've now lost five matches this year by four points or less.

And another thing: Ricky Stuart and Dean Pay played for NSW together in 1994 and toured with the Kangaroos at the end of that same season. Stuart drew the curtain on his playing career in 2000 and was coach of the Sydney Roosters two years later, guiding them to the premiership in his first season. Pay retired from footy in 1999 and waited eight years before getting into the coaching game. Stuart is in his 13th season as a coach, while Pay is in his maiden year as a first grade coach. Saturday's clash will be the second time Stuart and Pay have gone head to head, with the Raiders winning 26-10 in round five in Canberra.

A huge bonus for the Bulldogs with Josh Morris returning from a knee injury in the centres. Morris hurt his knee against the Sharks in round 11. Marcelo Montoya who was originally named in the centres played Intrust Super Premiership. In the pack, Danny Fualalo starts at prop for Blues rep David Klemmer and Clay Priest joins the bench. Asipeli Fine and Matt Frawley were dropped from the squad 24 hours out from kick-off.

The Raiders are 1-17 as named on Tuesday. Blake Austin has been dropped to the bench with Sam Williams called up at five-eighth. Siliva Havili moves into the starting side at lock for Maroons rep Josh Papalii. Charlie Gubb and Royce Hunt were left out 24 hours out from game time.

Blake Austin has been dropped to the bench with Sam Williams called up at five-eighth. Siliva Havili moves into the starting side at lock for Maroons rep Josh Papalii. Charlie Gubb and Royce Hunt were left out 24 hours out from game time. 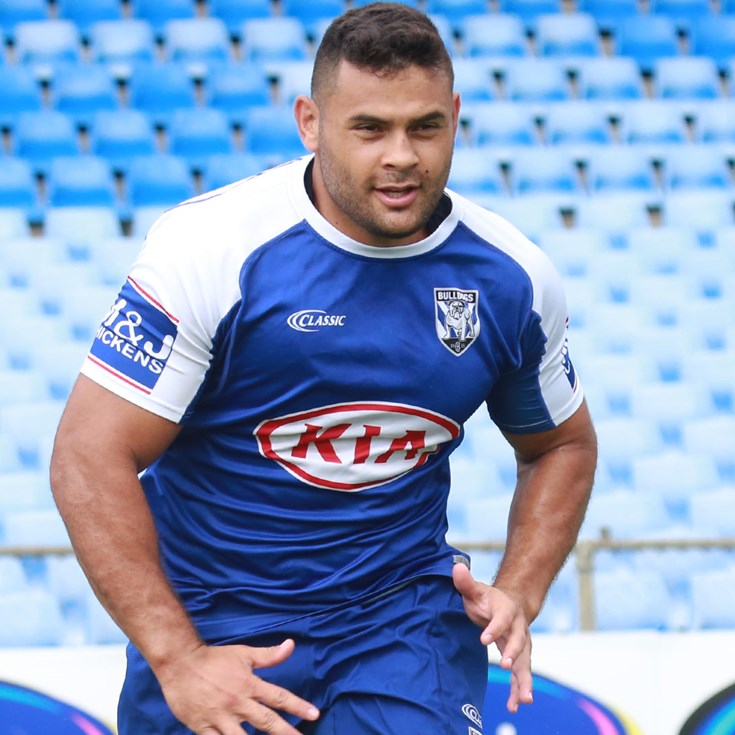