Josh Reynolds is still leaving his fingerprints in attack with his old club the Bulldogs despite shifting camp to the Wests Tigers.

Reynolds shares a house with Bulldogs five-eighth Matt Frawley, who admits he regularly bounces ideas off the ex-NSW Origin No.6 and former Bulldogs fan favourite.

"A hundred per cent. He's a really good mate," Frawley said, as Canterbury prepare to face the Tigers in round 12 action on Sunday at ANZ Stadium.

"He's been through it all and being at another club he can give me a few lessons. He's learnt a lot from here and now he's learning from other people at other clubs.

"We're always talking footy on and off the field. He's a really important aspect to my footy and my life."

Frawley has needed to draw on that knowledge bank more recently after coach Dean Pay dropped from the NRL side after two rounds. He returned in round nine after seven weeks in Intrust Super Premiership.

Pay told Frawley he wanted him to take the line on more and demand the ball more often.

"He wanted me to back myself a little more. He thought I wasn't doing as much as I probably could have," Frawley said.

So Frawley has taken that advice and combined it with his fireside chats with Reynolds.

"Grub is pretty good but he doesn't give me too much specific stuff… it's more being there as a mate," Frawley said.

"He believes in my football ability and gives me confidence. He tells me to go out there and back my ability. He's always good to bounce off. He comes to me for advice; I go to him for advice. It's good to get it all out in the open when we're at home.

"I am lucky to have him there. He's done a lot of things – played Origin and grand finals. So he's had a lot of experience – been through it all – and especially here at the club he knows all the ins and outs and how it all works.

"When you do get dropped you sort of get doubts. But I'm pretty lucky I've got a good support base with Grub, my family and the boys around here."

Frawley also wanted to lift the spirits of his halves partner Kieran Foran, who has also been suffering the yips with his form after missing a lot of football in the past two years. They toiled away in Sunday's clash with Cronulla but couldn't get the Dogs home in the narrow loss.

"I can't speak more highly of Foz as a person and as a footy player. He's been another massive person to help me throughout the process," Frawley said.

"His efforts are always there. He's starting to get his body right and that is sometimes the issue. His body is better week by week and he's getting back to playing every weekend. I love playing alongside him." 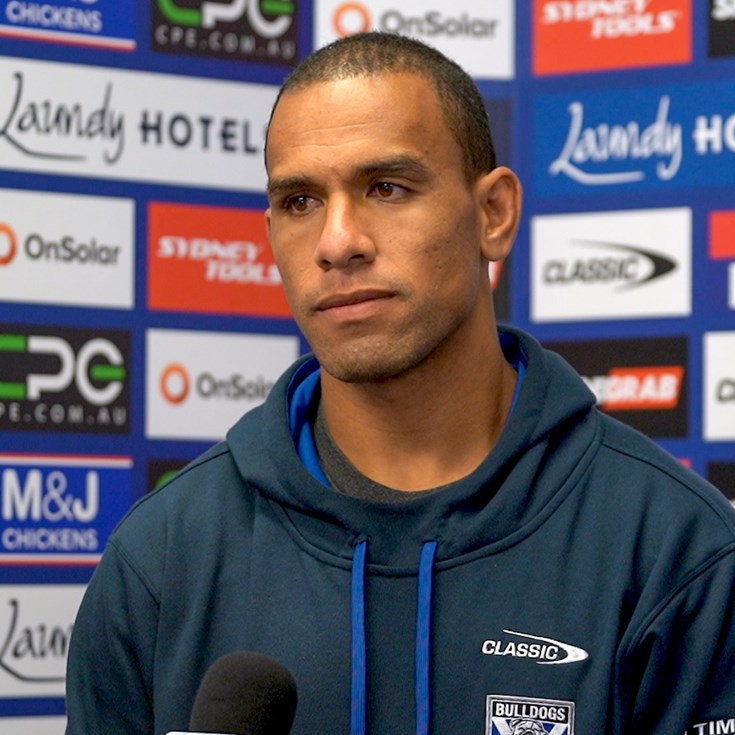