Have to tip your hat to Shane Flanagan and the never-beaten Sharks.

Despite injuries to a host of big-name players, Cronulla are officially the NRL's hottest team with a four-game win streak, coming from behind to claim an in-form Canberra's scalp on the road last Sunday.

Flanagan isn't exactly underrated as a coach, but he probably still isn't fully appreciated for his ability to make players understand what he expects from them as a coach and what teammates should expect from each other – whether it's a star like Matt Moylan or a role-playing reserve.

He flat out refuses to make excuses and his team plays with exactly the same mindset. The Sharks are playing like a top four team.

In a clash of the bottom two teams last Friday, the Bulldogs got a much-needed win over the Eels. Their reward is a Sunday afternoon stoush with the Sharks in enemy territory.

The Doggies will be hard-pressed to notch their fourth win of the season against a team growing in confidence by the week, but this is the NRL and we all know the form guide sometimes works in reverse.

Key match-up: Andrew Fifita won't be playing for NSW in the Origin series after declaring his allegiance to Tonga. That's his choice and good luck to him, but it's a shame we won't get to see the NRL's form forward in the Origin arena. Fifita is up against former Blues teammates Dave Klemmer and Aaron Woods on Sunday and the big fella will be looking to lead from the front as he has done all season.

For the Sharks to win: They go into the game as favourites but the Sharks are such a tough side to beat when their backs are against the wall that it might be worth convincing themselves they are the underdogs on Sunday. Cronulla have settled into a nice groove over the past month and are quietly building momentum as they start to get key players back from injury.

For the Bulldogs to win: As much as the Doggies like to get into a physical slog with opponents, they don't do it as consistently well as the Sharks. While they definitely need to bring their power game with Woods and Klemmer, halfback Kieran Foran has to control the tempo to ensure his team avoids being lured into a Sharks-style arm wrestle.

Bulldogs stat attack: Winger Brett Morris has an enviable strike rate against the Sharks, scoring 15 tries in 16 meetings. However, the Dogs have been cursed on Cronulla's home ground, with no wins since 2011.

And another thing: Without trying to sound too dramatic, this is pretty much a grand final for the Bulldogs. Last week's win restored some much-needed belief and they go in as underdogs this week at a ground that can be a graveyard on a Sunday afternoon for visiting teams. The Doggies say they aren't here too make up the numbers and can prove it if they upset the in-form Sharks.

Joseph Paulo has been elevated to the starting side ahead of Jayson Bukuya, who is back to the bench. Paul Gallen (knee) returns at lock and Bukuya (illness) is also returning. Kurt Dillon and Luke Lewis were cut from the reserves on Saturday. Josh Dugan (calf) has been named to return, replacing Sosaia Feki, while Braden Uele was also omitted an hour before kick-off.

Clay Priest has been promoted to the run-on side with David Klemmer going back to the bench. Raymond Faitala-Mariner is out and replaced in the back row by Adam Elliott. Asipeli Fine has been added to the interchange with Michael Lichaa, Greg Eastwood and John Olive the players omitted.

Steve Turner's prediction: The Sharks once again dug deep and shower plenty of spirit thanks largely to Andrew Fifita and Valentine Holmes to make it four wins in a row after a come from behind win in Canberra. Fifita has been outstanding and will be the focus for Canterbury. Stop him and it goes a long way to winning. The Bulldogs left it late, but they did end a three-game losing streak with a win over the Eels. The win was built on defence and commitment, something they will need this week in the Shire. Canterbury just need to keep winning and will thrive on the occasion this weekend. Big crowd and Sunday afternoon footy, does it get any better?
Tip: Bulldogs by 8 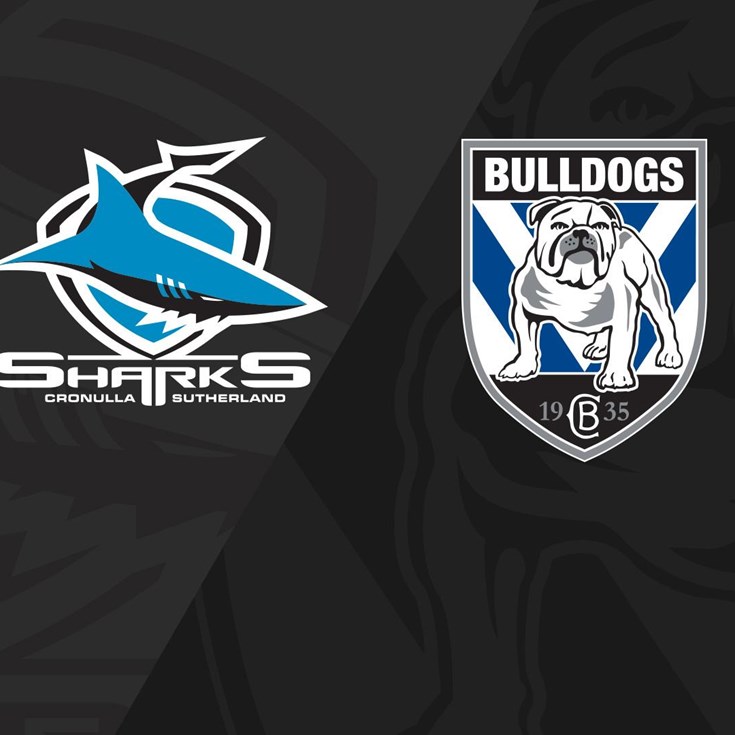 The story behind Rhyse Martin's success