Nailbiters Feature in Closest Day Ever

If you expected the Intrust Super Premiership to feature blowout scorelines in Round 9, you would have been disappointed after Saturday's incredible day of Rugby League.

The 5th of May, 2018 will go down as the closest day of second-tier Rugby League on record, with the margin across four games totalling just five points. When Mounties kicked off the weekend in style, fighting back to overcome the Warriors 30-26, it looked as though it could have been the round's highlight - but would end up being the biggest margin of the day.

The Newtown Jets and North Sydney Bears played out a remarkable draw, followed by the same result in the Wyong Roos' clash with the Newcastle Knights, before a third stalemate looked to be on the cards at Belmore Sports Ground. The Bulldogs, however, managed a 23-22 win over the Wentworthville Magpies, putting the icing on a day which was indicative of one of the most evenly-contested competitions in Rugby League.

Oldfield, Moceidreke the Difference for Mounties

The weekend began with the highly-anticipated clash between Mounties and the Warriors in Canberra, with two of Mounties' backs ultimately the difference for the home side.

Sitiveni Moceidreke, who kicked six goals and scored three tries last week, was unable to cross the try line in Round 9, but had a similar day out with the boot; his five goals from as many attempts ensured the victory compared with the Warriors' Chanel Harris-Tavita, who converted three of the side's five tries.

In general play, however, it was veteran centre Michael Oldfield who helped the Dragons the most, finishing three plays to come up with an impressive hat-trick. The victory consolidates Mounties' first place on the Intrust Super Premiership ladder, while the Auckland-based side drops to sixth.

A solid attendance at Henson Park was treated to a see-sawing affair between the Newtown Jets and North Sydney Bears, as the first leg of the 2018 Frank Hyde Shield lived up to all expectation.

Having trailed 12-6 at the break, the local crowd willed Newtown into the lead, before Bears winger Amanaki Veamatahau clutched onto a crossfield kick to level things up after the full-time siren had sounded. It set up a breathtaking sideline conversion attempt from Dean Hawkins, which hit the post and ensured a 22-22 draw.

The most thrilling of finishes was witnessed by Channel Nine's Phil Gould, Jamie Soward and Joel Caine, along with South Sydney Rabbitohs coach Anthony Seibold. It means the Frank Hyde Shield will be decided in the teams' follow-up clash in Round 18 at North Sydney Oval, broadcast live on Fox League on Saturday, 14 July.

Just two hours after the remarkable result at Henson, Intrust Super Premiership fans were treated to another draw at Morry Breen Oval - and once again, it ended in exceptional circumstances.

Having trailed 20-12 early in the second half, the Wyong Roos fought back to be level with the Newcastle Knights at 22-all in the dying stages. It was then that two of the competition's youngest halves stood up.

In his Intrust Super Premiership debut, Sean O'Sullivan - son of long-serving recruitment officer Peter - added the extra point for Wyong with just three minutes remaining. The Roos looked to have secured their first win since Round 3 when another inexperienced playmaker - Knights' No.6 Jack Johns, son of NSW True Blue Matthew - kicked a field goal of his own on the full-time siren.

Elation from the Knights was met with devastation from the Roos as the sides settled for one competition point each - largely thanks to two of Rugby League's future stars.

Kostjaysn Takes the Reigns as Brown Watches on

With the immediate departure of Knights Intrust Super Premiership coach Simon Woolford, the clipboard was handed to another former hooker, Rory Kostjaysn - a man who officially retired from playing less than one year ago.

Kostjaysn, who had signed with the Knights last year but never played a game due to injury, had already been in the club's coaching ranks and will lead the side for the rest of the year, starting with Newcastle's thrilling draw with Wyong. Watching on with a keen eye was the club's head coach Nathan Brown, who will be pleased with the Intrust Super Premiership side's ability to hold on in the dying stages.

Also on the sidelined at Morry Breen Oval - and especially happy with Jack Johns' last-minute field goals - was father Matthew. The former Knights, NSW and Kangaroos playmaker continues to play a major role in his son's development.

A week on from Fa'amanu Brown and Renou To'Omaga's match-winning performance against the Blacktown Workers Sea Eagles, the pair played a major role in the Bulldogs' narrow win over the Wentworthville Magpies.

Once again, the rampaging To'Omaga scored a quick-fire double for the home side, breaking tackles at will as the Bulldogs returned from a 16-0 half-time deficit. When Josh Bergamin scored late in the game, it levelled the scores and the Intrust Super Premiership looked destined for its third draw in one day - before hooker Brown calmly added the extra one point.

It doesn't hurt the pair's case for NRL selections - and given Michael Lichaa's relegation to the Intrust Super Premiership, Brown could be more likely for a bench spot in the top grade. For the Magpies, a Nathan Davis double was not enough to secure what would have been a fourth consecutive victory.

You Can't Take the Grub out of Belmore

One interested onlooker at Belmore Sports Ground was former Bulldogs favourite Josh Reynolds, who took in the side's clash with the Magpies from the stands.

The Wests Tigers recruit, who has played just 29 minutes in between hamstring and shoulder injuries, opted to watch the Intrust Super Premiership clash over the Tigers' NRL game against the Warriors, which was being played at the same time. Understandably, Reynolds was not required to travel to Auckland for that game and will instead watch a replay of the game.

Reynolds, a Fox League presenter and general Rugby League fan, has made the most of his time on the sidelines, attending several Intrust Super Premiership and NRL games in recent weeks. The man known affectionately as 'Grub' is due to return to the field in two weeks.

As the St George Illawarra Dragons convincingly defeated the Western Suburbs Magpies to bounce back to form, the standout was Jordan Pereira who had one of his best performances in the 13-man code.

Pereira, originally from Wellington, had played rugby union his whole life when he found himself in Perth in 2013, making the switch to Rugby League and playing in the NRL WA's Cash Converters Premiership. The winger was signed to the Mackay Cutters in 2014 before making the trip down to Wollongong midway through the 2017 season, where he has played for the Dragons ever since.

Sunday afternoon's game saw Pereira run in four tries - the first time he has achieved such a feat in senior Rugby League. The 25-year-old was a constant threat on the Dragons' left edge as they won 42-12, with fullback Patrick Herbert and halfback Jack Payne also performing admirably. Contracted to the NRL squad, Pereira is signed to the Dragons until the end of the 2018 season and continues to push for first grade honours.

A post shared by Intrust Super Premiership NSW (@intrustsuperprm) on May 5, 2018 at 8:59pm PDT 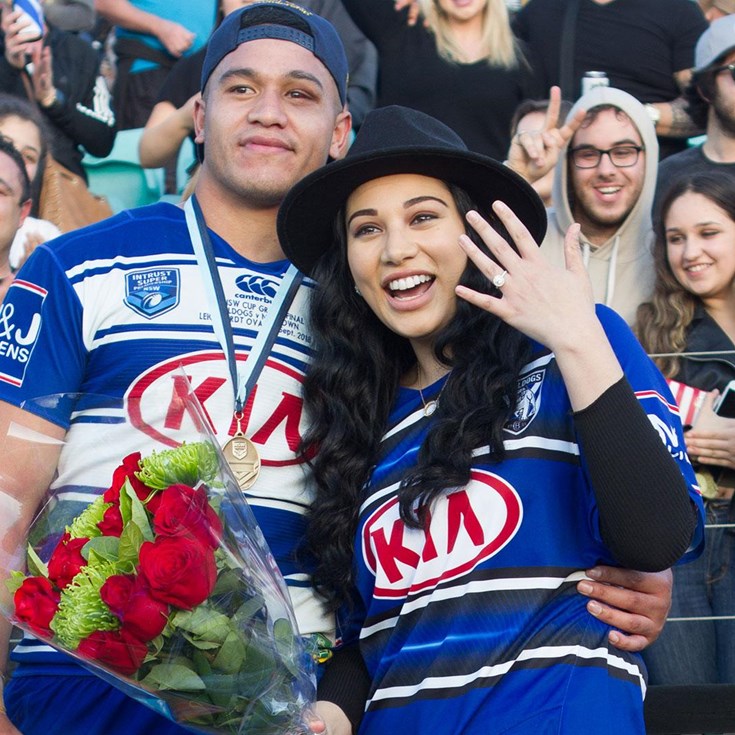 Brown: This is what we play for