Renouf To'omaga and Fa'amanu brown were simply outstanding for the Canterbury-Bankstown Bulldogs in their 44-14 victory over the Blacktown Workers Sea Eagles.

Jackson Hastings lined up for the Sea Eagles, as did Moses Suli, but those rising stars were not enough to stop the Bulldogs at home.

An incredibly powerful effort opened the scoring for the Bulldogs when Renouf To'omaga hit the defence eight metres out from the try-line and carried the Blacktown players on his back the whole way to score what was a remarkable try.

They looked to have another one just moments later when Jayden Okunbor threw a wonderful floater to Reimis Smith, but the winger stepped out in his pursuit for a four-pointer.

Blacktown hit back in the complete opposite fashion to the Bulldogs' first try, with the ball traveling through seven sets of hands and being shifted towards both sidelines in the search for some space, before Taealoaloa saw an opportunity to dart through a small hole which was enough to find the try-line.

Lachlan Lewis was shifted to the halves in the hope that he would put his players through some holes, but it would be him running a perfect line onto a pass from Brown at dummy half that saw him stroll through a gap adjacent to the posts.

With the Bulldogs leading 12-6, a penalty just to the right of the posts was too good an opportunity to pass on, with Brown nudging the home side out to an eight-point lead.

Brown tripled that effort shortly after, scoring a try from the shortest possible range at dummy half under the posts, before converting his own try which increased the Bulldogs' lead to 20-6.

That seemed to be the half-time score, but the Sea Eagles 'never say die' attitude kicked in when a Josh Cleeland kick was deflected and caught by Johnathan Wright with the buzzer going off in the background. He then offloaded to Tom Wright, who showed plenty of speed to tip-toe the sideline and burn two defenders to score an important, and timely try.

An amazing piece of play led to Blacktown's first try of the second half, when a cross-field kick on half-way went straight into the hands of Vai Toutai, before he put a grubber infield for Tyler Cassell to re-gather and then throw a 'Hail Mary' offload that was touched by the Bulldogs and then dived on by Cassell. He then played the ball, and the Sea Eagles took advantage of the backtracking defence with a right-to-left shift that saw Tom Wright score his second try.

To'omaga once again showed his strength to score his second try of the day, charging for the defence before spinning out of a tackle, breaking another and planting the ball down to give the Bulldogs an 12 point lead.

Lewis led the chase from a Cleeland bomb to force a repeat set, and the Bulldogs took advantage of the field position when Brown scored an identical try to what he did in the first half, picking the ball up from dummy half and simply planting it down. 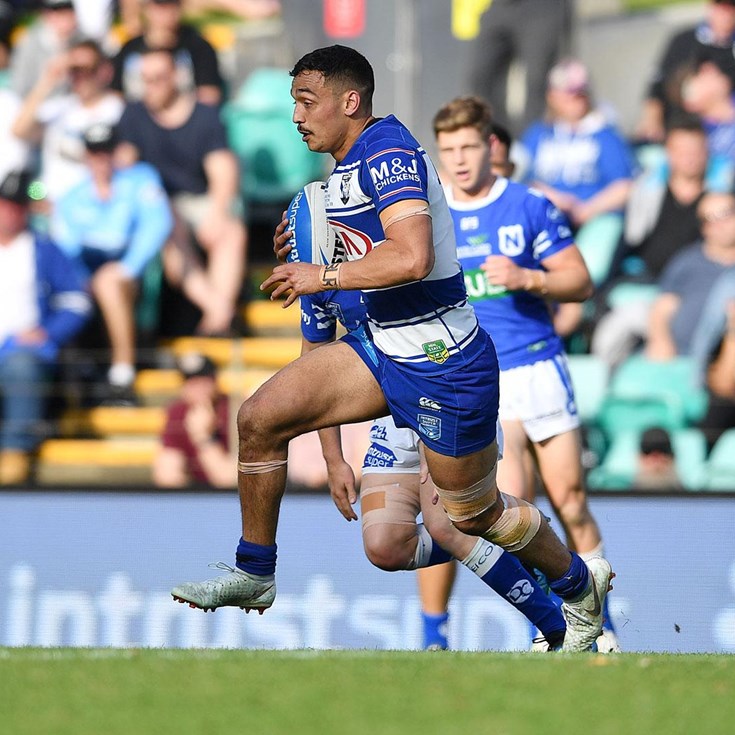 Bulldogs Back in Winners' Circle with Blacktown Win