The Canberra Raiders have broken their four-match losing streak to open their Telstra Premiership account for 2018 by overcoming a horror injury toll to beat the Canterbury-Bankstown Bulldogs 26-10.

The home side lost Ata Hingano, Michael Oldfield (concussion) and Sam Williams (knee) leaving the Raiders with just one fit man - Liam Knight - on the bench for the entire second half.

Penalties and errors at crucial times cost the Bulldogs but a much-improved defensive effort by the Raiders helped propel them to a gutsy victory at home in front of an 11,800 crowd.

Adding insult to injury, Bulldogs captain Josh Jackson was placed on report late in the game after a late tackle on kicker Aidan Sezer left him rattled.

The Raiders opened the scoring with a sensational length of the field movement, started with a daring run by Nick Cotric from his own in-goal. Then Jordan Rapana flew down the sideline only to be cut short by Jeremy Marshall-King in desperate cover defence.

Joey Leilua finished off the move on the next play as the home side moved to a 6-0 lead after just nine minutes.

Canterbury suffered a blow with Brett Morris left bleeding from his cheek bone after copping a boot to the head while attempting to chase down Rapana. He did not return.

Leilua earned his second try, when he combined with Rapana who tapped down an accurate Sezer chip-kick across field to make the score 12-0.

The Bulldogs continued to attack on their left edge but despite enjoying 62 percent of possession through the first quarter of the game they were unable to cross the stripe.

Luke Bateman was taken from the field in the 27th minute for a concussion test after coming off second best with the shoulder of Aaron Woods.

Canberra continued to turn around the Bulldogs wingers with well-placed kicks in behind the defence, with Rapana unlucky not to pull off a sensational effort in the 30th minute.

Hingano was flattened after colliding heavily with the hip of Greg Eastwood and was taken from the field and also failed to return for the rest of the night.

The Raiders' concussion woes continued when Oldfield was taken from the field in the 40th minute as the numbers on the home side's bench started to thin.

Despite a late surge by the Bulldogs right on half-time, the Raiders' goal line defence managed to hold solid as they maintained their 12-0 lead at the break.

The Raiders bombed what looked to be a certain try early in the second stanza, when quick hands created an overlap on their left edge only for the final pass to the find the grass.

It came back to hurt them straight away when the Dogs drove down field with Kieran Foran spying a gap in the 51st minute close to the posts to make it 12-6.

The momentum was all with the Bulldogs as Will Hopoate flew high only to just lose control of the ball over the line.

Canberra's horror injury toll continued when Sam Williams was carted off the field with a knee injury after an accidental collision with Elliott Whitehead.

Amazingly the Raiders were next to score when another Sezer kick early in the tackle count bounced perfectly for Jarrod Croker to make the score 18-6.

Croker bagged his double minutes later when he flew high to pluck another excellent chip-kick from Sezer out of the air as Canberra stretched the lead by 16 points.

Two late penalties for Croker rounded out the scoring to see the home side seal a gusty victory. 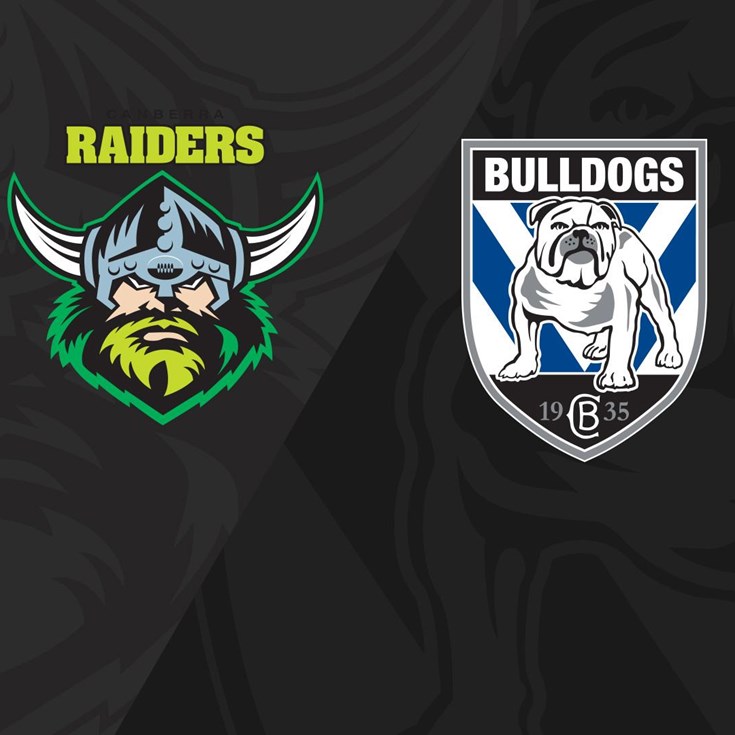