After just his third NRL game for the Canterbury-Bankstown Bulldogs, young half Jeremy Marshall-King could be in line for a lot more after a solid 80 minutes in the 20-18 win over the Penrith Panthers tonight.

The same jink and side-step that his older brother Benji Marshall possesses was in evidence tonight as Marshall-King took over the No.6 jersey from Matt Frawley, who played in the opening two Bulldogs losses for the 2018 Telstra Premiership season.

''He was good Jez,'' Bulldogs coach Dean Pay said, when asked if the 22-year-old would retain the five-eighth role for the Good Friday annual clash against the South Sydney Rabbitohs next round.

''I just said to him during the week 'your attack will look after itself; we just need you to make sure you make your tackles.' He was really good in that area. Right from day one he had a great attitude towards his footy and his training.

Marshall-King played just one NRL game for the Wests Tigers before signing with the Bulldogs this year.

He was not in Pay's original thoughts for his halves when he pieced together his initial 25-strong first grade lineup. But he has now offered him a full-time contract and brought him into the 30-member NRL.

Another player to bring a smile to Pay’s face on Friday night at ANZ Stadium was hooker and half turned fullback, Moses Mbye.

He scored a brace and made three line breaks in the first half alone.

''I’ve always thought of him as a fullback,'' Pay said.

''He's a runner and in any sort of open field, or broken play, he's dynamic at what he does.

''And he's improving every week and getting more confidence in what he's doing.''

It was a tough season for Mbye in 2017 as he didn’t seem able to spark the Bulldogs attack while wearing the No.7 jersey.

''He's worked extremely hard and in a new position it's never going to be easy for you,'' Bulldogs captain Josh Jackson said.

''He's taken it in his stride and playing really good footy. Obviously he's doing well in attack for us but the stuff he's doing off the ball is also really good. His communication on the try-line, his defensive effort … and he's only going to get better.''

After conceding 30 points in last week's loss to the Sydney Roosters and 36 the week before to Melbourne Storm, Pay was pleased to see some holes being plugged.

''We trained really hard during the week and the boys worked with a lot of intensity,'' he said.

''Obviously our defence was better tonight. It's nice to score a few points but we've still got some [defensive] work to do.''

Attack and execution also seemed more on song with an 87 per cent completion rate - only failing to finish five sets.

The Bulldogs only made six errors and conceded seven penalties - the Panthers gave away 12 and missed a hefty 51 tackles. 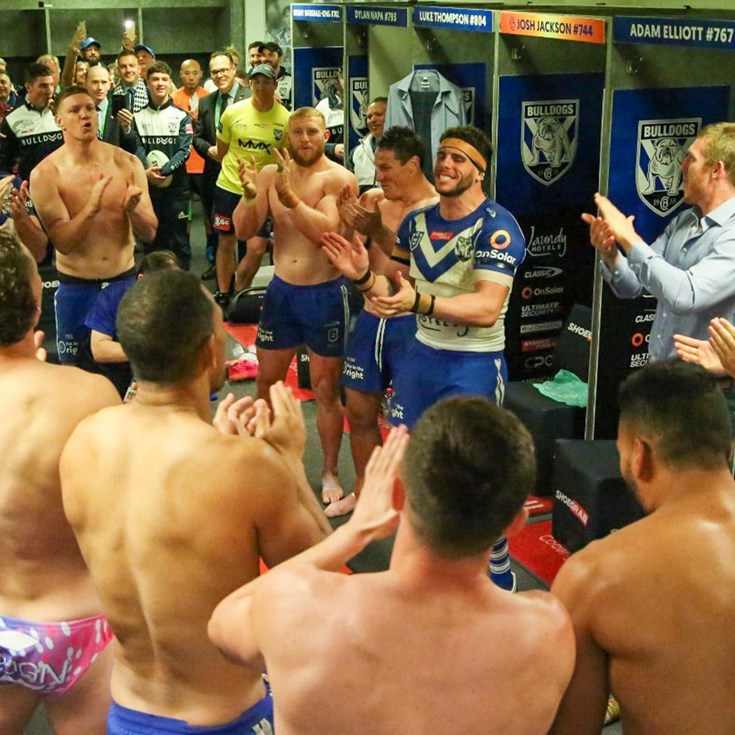