The Canterbury-Bankstown Bulldogs farewelled a favourite son in Steve Folkes and celebrated another in Josh Morris as they registered their first competition points for 2018 at the expense of Penrith 20-18 at ANZ Stadium on Friday night.

But the big news was Penrith's goalkicking halfback Nathan Cleary suffering a knee injury, which could severely dampen the Panthers' chances of staying in the top eight over the next few weeks.

Cleary did not start the second half, sitting with ice strapped to his left knee, and dressed in a clean polo shirt to signify his night was over.

Reports from the bench said the 20-year-old had strained medial knee ligaments and could miss between one to four weeks. Cleary will now have scans to give a more precise diagnosis.

With Cleary down, the Panthers were looking to No.6 James Maloney to lift and organise them but he failed on both counts. He did manage to kick a conversion to Josh Mansour’s acrobatic try from the sideline in the 73rd minute to put the Panthers within two points.

It was the Bulldogs' first home game for the 2018 Telstra Premiership season. Both teams honoured Folkes - the club's former premiership winner as both player and coach with a minute's silence before kick-off, and then a small half-time tribute. The 59-year-old died four weeks ago from a heart attack.

Morris was given the honour of leading his teammates out in recognition of his 200th game.

He then scored a 90-metre intercept try off a Cleary pass to emphasise the night meant something to him. As fatigue set into those 31-year-old legs, Morris dived under the posts from nearly two metres out as he heard the footsteps of Penrith pair Waqa Blake and Christian Crichton right behind him.

But it was teammate and fullback Moses Mbye who stole the show for the Bulldogs with two tries, two goals and three line breaks - and that was only his first half score card. In the second half he was much quieter but always looked dangerous with the ball in hand.

The Penrith bubble had finally burst. They were undefeated after two rounds and trying to win three in a row from scratch for the first time since 1997.

For a third straight week Penrith conceded points early when Mbye crossed on the right side in the fifth minute, after the bunker cleared a possible obstruction of Panthers No.6 James Maloney. The try came in the next set after the bunker disallowed a Brett Morris try, ruling the Bulldogs winger had been held up over the line.

Then the Josh Morris converted try blew the score out to 10-0 with the game only 12 minutes old. But the Bulldogs weren’t finished yet.

Will Hopoate showed lightning quick reflexes in the 17th minute to get the ball on the chalk before he was yanked backwards by Mansour. Mbye missed the conversion by just centimetres to put the Dogs 14-0 ahead - exactly the same score line the Panthers faced against Parramatta and South Sydney over the past fortnight.

They won both those games, and when Maloney backed up Isaah Yeo’s break upfield to score five minutes later, it looked like the Panthers' customary revival was on again.

Dylan Edwards scored a relatively simple try five minutes before the break to push the Panthers within eight points 20-12. That remained the halftime score.

It didn’t change until Mansour scored in the south-eastern corner with his left arm wrapped around the goal post. That gave the Panthers a real sniff with six minutes left on the clock.

But their last attacking move broke down; then they gave away a penalty - their 12th - and the Bulldogs kicked upfield to save the match.

The Bulldogs are back at ANZ Stadium on Good Friday for the annual Easter clash against the South Sydney Rabbitohs, while the Panthers are off on a road trip to Townsville next Thursday to face the North Queensland Cowboys. 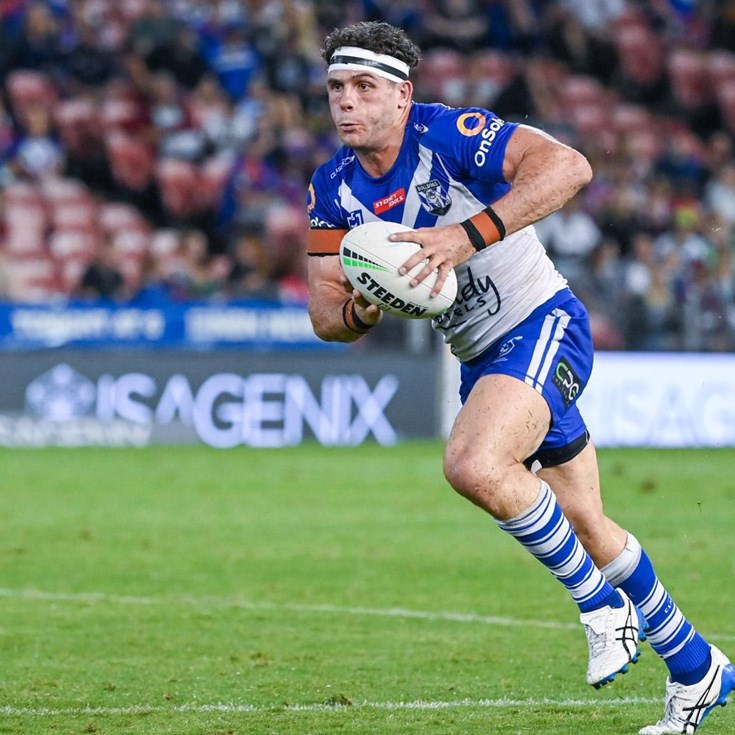