It's the 'C' word that ultimately brought Des Hasler unstuck, but new Bulldogs coach Dean Pay believes he has what it takes to bring the club's long-standing culture back to Belmore.

Pay played seven seasons with Canterbury, winning a premiership in 1995 in a side that epitomised the 'Dogs of War' culture, but that feared character trait has been missing for a number of years with many people claiming Hasler – who took the club to two grand finals – didn't understand what the Bulldogs were all about.

The rookie coach has served a lengthy apprenticeship as an assistant and helped guide the Junior Blues to plenty of success in the under-20s State of Origin arena, but his biggest test will be returning the Bulldogs to the finals after a disappointing 2017 campaign.

"From what I've known of the club, it's always had a rich family value as a club. Hard work is something else the club really values," Pay told NRL360.

"The main thing is that we want to make sure that we create an environment that the boys really enjoy coming into work and are happy with what they're doing, because if they're happy with what they're doing off the field and they enjoy coming to work, that's when they're going to play their best football. That's what we need to make sure that we create."

Pay's attempts to deliver an attitude adjustment have been dealt a blow with Josh Reynolds – long considered the heart and soul of the club – and former skipper James Graham no longer at the club after accepting lengthy deals at the Wests Tigers and Dragons respectively.

While their absence will leave a gaping hole on and off the field, Pay is confident guys like Josh Jackson, David Klemmer and the Morris twins, as well as new recruits Aaron Woods and Kieran Foran, can stand up in their stead.

"It gives blokes like Josh Jackson, Klem – Woodsy's coming in as well – so we've got a number of guys who have got the potential to stand up to make sure they're leaders. We've still got a fair bit of experience with the Morris boys as well so there's an opportunity for a lot of those younger guys to fill the void."

Graham's move to the Dragons also means the Bulldogs are on the hunt for a new captain.

"At the moment there are a few contenders," Pay said.

"Jacko is right up there, and I've got a lot of time for Aaron Woods as well. Klem has been there for a number of years so there are quite a few options. But we'll address that as we go along." 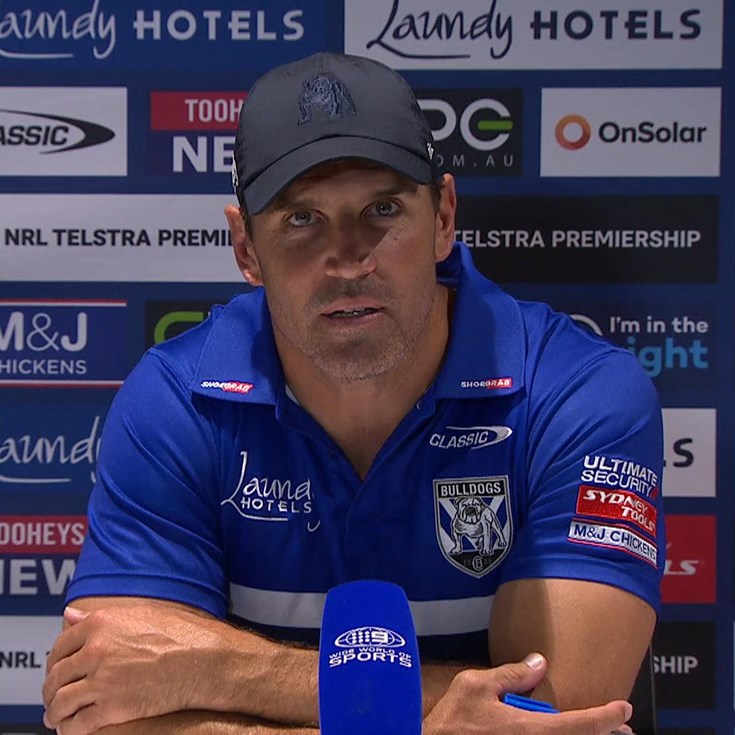 Hetherington sent off for high shot on Holmes