SEPTEMBER 25, 2004: The Bulldogs booked a spot in the 2004 grand final with a 16-point win over Penrith in their preliminary final at the Sydney Football Stadium.

After trailing 8-4 at half-time, the Bulldogs dominated the second half to run out convincing 30-14 winners.

Bulldogs winger Hazem El Masri had a rare off night with the boot but made up for it with a hat-trick of tries. He kicked five goals from eight attempts.

The turning point in the match came early in the second half when Wesser was sent to the sin-bin for a professional foul.

During his absence the Bulldogs dominated possession, running in two tries and converting a penalty goal.

The match began at a furious pace, with both the Panthers and Bulldogs attempting to put pressure on the other with quick play the balls. 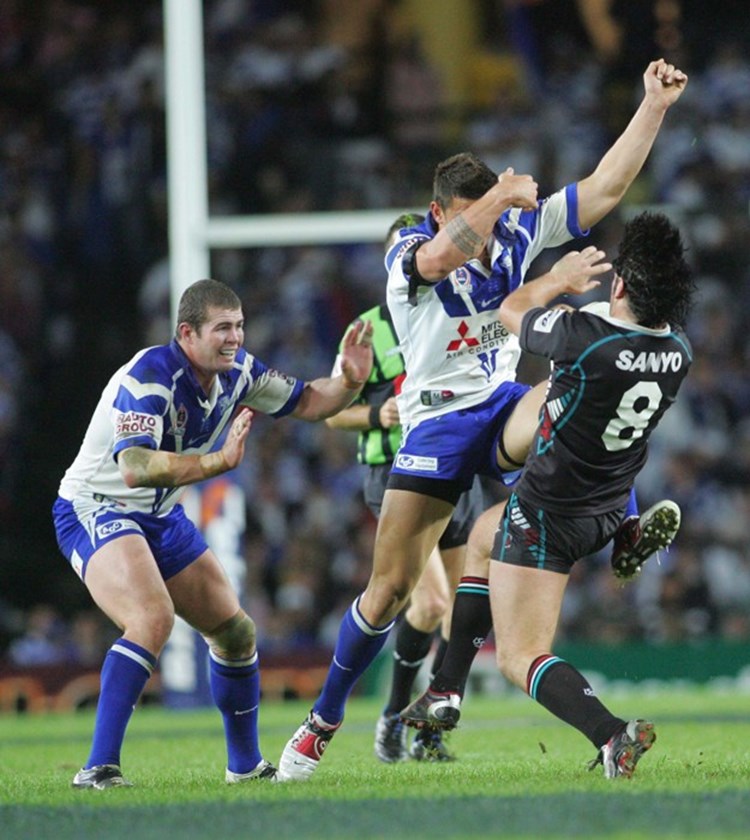 It was the Panthers who gained the early advantage with a penalty goal to Ryan Girdler in the 10th minute.

But after surviving the initial onslaught, the Bulldogs hit the front in the 25th minute when half-back Brent Sherwin put in a beautifully placed kick over the top to El Masri.

The Bulldogs winger, who got on the outside of his man Luke Rooney, regathered the ball on the full and dived over for a try.

The super boot, however, failed to convert his own try and the score remained 4-2.

The Bulldogs forwards looked to be getting on top of the Panthers when five-eighth Preston Campbell weaved his magic.

Campbell stepped inside the defence and strolled up field before throwing a lovely ball to Paul Whatuira.

Whatuira then turned the ball back on the inside to full-back Rhys Wesser, who crossed underneath the posts. Girdler added the extras to give the Panthers a six-point advantage at the break.

The game quickly swung in the Bulldogs' favour when Wesser was sent from the field.

The Panthers rarely had the ball in the first 15 minutes of the second stanza and the Bulldogs capitalised.

Anasta crashed over from close range in the 44th minute to level the scores at 8-8.

El Masri put the Dogs back in front with a penalty goal in the 49th minute, before Maitua scored just as Wesser returned to the field.

El Masri added the extras to give the Bulldogs a 16-8 lead.

The winger then seemingly put the game out of the Panthers' reach when he scored his second in the 67th minute. However, Campbell gave the Panthers some hope when he evaded four defenders to score near the posts with 10 minutes remaining. Girdler once again added the extras.

But a comedy of errors from the kick-off saw the Bulldogs awarded a penalty goal right in front of the posts. El Masri took the gift two points to sink the Panthers' hopes.

A try to El Masri close to full-time completed the rout for the Bulldogs.

Presented by
16 hours ago

Presented by
6 days ago